Neil Randall is an associate professor at the University of Waterloo, perhaps the finest university in Waterloo west of Philip Street1. To quote his UW bio:

I am a long-time faculty member in the English department at the University of Waterloo, Canada, and the director of the Games Institute (uwaterloo.ca/games-institute).

I confess I did not look closely at Randall’s 1987 book Storm of Dust when I bought it last year, except to note that:

What I was to discover is that Storm of Dust is an interesting artifact of ancient times, an artifact based on effectively obsolete tech. Who would have thought that interactive game books would ever die?

If you are younger than twenty or so, you may be wondering: what the heck are those?

Finding people to play with has always been a problem for people who enjoy roleplaying games … heck, or most games. Thus the eternal fascination of solitaire.

These days, we play all sorts of games on computers. Even solitaire (lots of solitaire). In ancient times, computers were far less powerful, far less common, and far more expensive than they are now. But bookstores were still common. Many bookstores sold interactive game books. Every so often the story would ask the reader to choose between several possible courses of action. The reader’s choices determined how the story played out.

Perhaps the most famous examples of the format were the Choose Your Own Adventure books put out by first by Vermont Crossroads Press. Later, Bantam. Puffin/Wizard Books and Fighting Fantasy books were popular. I should say ​“are”, because both series are still being printed, even if they are not as popular as they were in the Before Times.

The Crossroads2 Adventures, produced by Bill Fawcett and Associates, were Tor’s foray into the field. ISFDB lists fourteen books in the series, published between 1987 and 1988. Each Crossroads Adventure was tied into a different well-known SF novel. Interestingly, many of the settings they used were not Tor properties.

Storm of Dust was the second book in the series. It is set in the universe of David Drake’s Dragon Lord. Included within the text are:

Storm of Dust: An Introduction (by David Drake)

Drake explains how his Arthurian novel Dragon Lord came to be written. Rather like the book covered in last week’s review, The Ruined Empire, Dragon Lord was originally intended as part of a larger project and was later released as an independent work. It’s an interesting essay on the genesis of what I remember as a solid novel3.

Introduction and Rules to Crossroadstm Adventures (by Bill Fawcett):

This is a 17-page roleplaying game. There are no rules for generating new characters. Instead all characters have been pre-generated. The player must play an adventurer named Niall. The player will need three six-sided dice, which are not provided.

The game mechanics are similar enough to other games that any experienced player will pick them up immediately. The detail that stood out is that in this game, wisdom and luck are represented by the same stat without necessarily being the same thing. One player’s Niall might be a bit wiser than average. Another’s might be just a bit luckier.

Storm of Dust (by Neil Randall):

Niall is hired by Arthur and Merlin to find an ancient cup which Arthur covets and which Merlin fears may hold the fate of the land. Between Niall and the cup are many dangers. Whether Niall succeeds or ends up dead in a ditch somewhere is entirely in the player’s hands.

There’s no point to flipping ahead as the 93 sections are arranged in random chronological order.

Drake’s version of post-Roman Britain draws on the fragmentary historical documentation of the period, whereas Randall, while faithful to Drake’s novel, is more focused on the legends of the time.

Drake’s Arthur is the sort of man who could have temporarily held off the Saxons for a generation: smart, ruthless, and highly focused, not the noble figure described by T. H. White at all. Randall adds to that a Britain where the famed relics of legend can be found, if not necessarily in the form we expect.

Randall discusses the genesis of his sequel to Drake’s novel.

Readers may be getting tired about how often I complain about the lack of indexes in gaming source books. Fear not! While this has no index, I was successfully distracted from that lack by the fact that after page 27, it also has no page numbers. 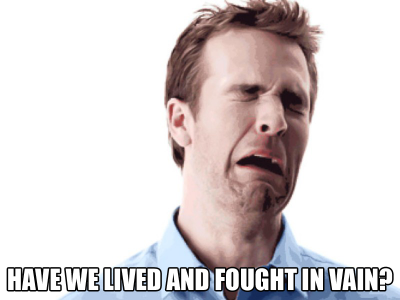 Instead each section is numbered. That is sufficient for needs but some readers (proper, good readers) will still find the lack of page numbers distracting.

There are about 24 1/2 pages of text setting up the adventure before the reader is offered the chance to make a decision. That is a bit more than I expected. Many of the decision paths lead to good old chapter 29: death. Certainly every path I explored did. But death is not the end, since players can always play again and try different paths.

This was a reasonable page-turner, even if I kept finding myself back at section 29 over and over (I did find one successful ending but not the path that led to it). It was interesting trip into adventure gaming’s past.

The ISFDB entry suggests that despite the tie-in angle, Crossroads Adventures were not especially popular; there were only fourteen books issued over the series two – year run and few if any of them appear to have been reprinted.

Used copies of Storm of Dust are available here (Amazon). The book is not available from Chapters-Indigo.

1: For a town that once voted down electrification, Waterloo has an unusual number of respected universities. Which is to say, any at all.

2: As far as I know, the name of this series and the name of the company who published the first Choose Your Own Adventure Books are similar only by coincidence.

3: One that falls through the cracks of my several review series :(