On the one hand, I am not a fan of Anne McCaffrey’s fiction. On the other, she was a significant figure in the field, one of just five women named Grand Master of Science Fiction; at some point I need to acknowledge her. I find that I do have some of her books1. One of those books is the initially standalone2 1969 novel Decision at Doona.

You might think the inhabitants of overcrowded, regimented Earth would welcome a chance to escape to Doona, that pristine new world. In fact, not many do, for this is an age in which the bulk of the Race has become lazy and decadent. The masses are satisfied with tiny, safe lives. It is enough to drive pro-colonization functionaries to despair.

There is an upside to overpopulation and that is that groups who make up a very small fraction of the population can still have impressive absolute numbers. Men like Kenneth Reeve, men who are eager for freedom and willing to pay for it with labour. Their wives and children are cut from the same cloth; once the men are done preparing the colony, their families plan to join them.

Doona was carefully mapped and explored before colonists were allowed to settle down. How the scouts could have missed natives is inexplicable. The facts remain: Doona is inhabited and in their ignorance, the colonists have violated Earth’s prime directive: No contact with aliens.

There will be consequences.

You just don’t see a lot of Racial Decadence stories these days. It is interesting that the major issue sabotaging interstellar colonies in this book isn’t the usual ​“habitable planets are rare” or ​“space travel is super expensive”; it’s ​“very few people are keen on trading their comfortable apartments for outhouses and Reptiles of Unusual Size.”

Earth has an unusually humane (for science fiction) reason for eschewing contact with other races. The one time they tried it, they inadvertently caused the extinction of an entire species. The steps they took to avoid doing this again may seen like a bit of an overreaction, but not only are the stakes they are playing for very high, but there is evidence later in the book that a lot of first contacts go horrifyingly wrong.

I used the Sweet cover for this review because that is the edition I own. I do want to mention the original cover art. Does anyone have any idea what it was about the story that made Richard Powers think 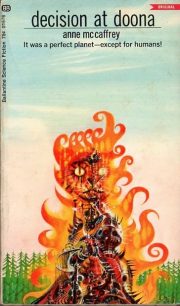 “This book just screams burning cat to me”?

It has been decades since I last reread this. My memory was that the big reveal was a surprising twist, but on rereading I see that it is perfectly clear from the interstitial material what’s really going on.

In general, this is not a terrible book but it is a bit dull — despite McCaffrey’s attempt to spice things up with bombastic militarists and obstructive bureaucrats. In the 1970s, I read it because it was there. As for re-reading it … um, at least it was short.

I am not sure this is in print in North America, although Amazon is happy to try to sell it to you. There does seem to be a British edition.

1: Why would I own books by an author who makes me go meh? Because it was the 1970s and there was not so much SF available then; avid fans could not be choosy.

2: In fact, there are two sequels, 1992’s Crisis on Doona and 1994’s Treaty on Doona. Both were written with Jody Lynn Nye. After 1990, McCaffrey often partnered with younger writers. Cynic than I am, I suspect Nye did most of the writing.