Justice, Inc. is the first volume of Paul Ernst’s The Avenger pulp series, which was published in 1939 by Smith and Street under the Kenneth Robeson house name.

Desperate to reach Montreal before his mother-in-law dies, millionaire Richard Benson forces a plane leaving Buffalo to allow Benson, Alicia and their daughter Alice to occupy three empty seats. Once the plane is in the air, fastidiousness sends Benson to the lavatory to wash his almost clean hands. When he emerges, Alicia and Alice are nowhere to be seen. The flight crew and passengers all agree that Benson boarded the plane alone.

The altercation that follows ends when someone knocks Benson cold with a fire extinguisher. He languishes unconscious for three weeks. When he awakes, he is a man transformed.

This somebody else had snow-white hair instead of coal-black hair. This somebody had a face as white as linen, instead of a face bronzed by sun and tinted by flowing vitality. This somebody’s face, moreover, was as absolutely expressionless as a wax mask. 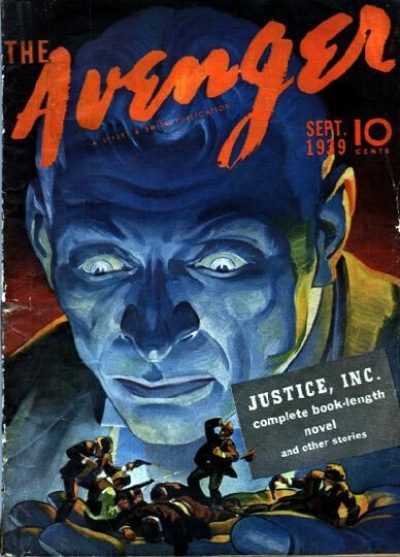 The hysterical facial paralysis does have an advantage: his face can be moulded as though it were clay.

Thanks to the Bensons’ peripatetic lifestyle, precious little evidence exists to prove Benson was married or that his wife and child were with him that day1. All the eyewitnesses, from cabbie to flight crew, swear up and down that Benson was alone. The authorities can do nothing.

Before he was a happily married man, Richard Benson was an international adventurer braving dangers untold for great wealth. He has a wealth of assets, physical, mental and financial, to devote to finding out just what happened to his missing wife and daughter. Soon, he has something more: an ally.

Morose Scotsman Fergus ​“Mac” MacMurdie is a skilled pharmacist and chemist who fell apart after his family was killed by gangsters. He alone is willing to admit he saw three people, not just one board the plane. This makes him a target … but he is willing to side with Benson nonetheless.

Employing the age-old method of ostentatiously following up leads to see who shoots at them, Benson and Mac undercover a bizarre kidnapping scheme, kept secret from the police by families afraid police involvement would doom their missing loved ones. The common element: ownership of stock in Buffalo Tap & Die Work, an otherwise healthy company whose stock valuation has taken a hit thanks to the ongoing economic unpleasantness of the 1930s.

Benson gains another ally in the form of chauffeur Algernon Heathcote ​“Smitty” Smith, a former convict (framed, of course) afraid that he will be fingered for the kidnapping. The best way to avoid this is to uncover the real criminals and so after the traditional physical altercation, the gigantic electronics genius joins Benson and Mac.

The frequency with which gunmen try to kill the trio proves they are on the right track. It is a track that will lead the investigations into the heart of the Thousand Islands and a nest of heavily armed villains and criminals.

It is not one that will lead to any solace for Benson.

On a road trip to California, I’d encountered this book. 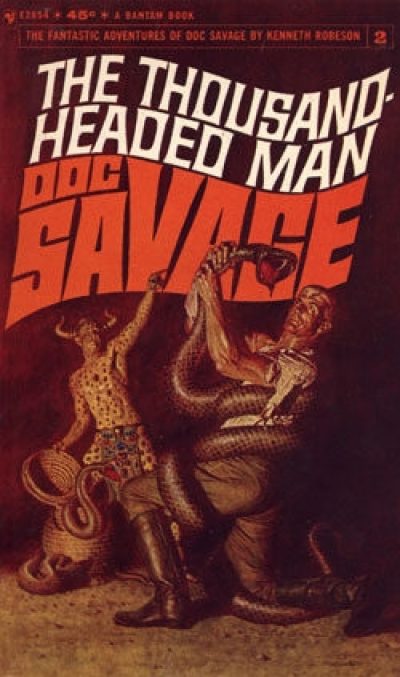 A couple of years later, I encountered this book. 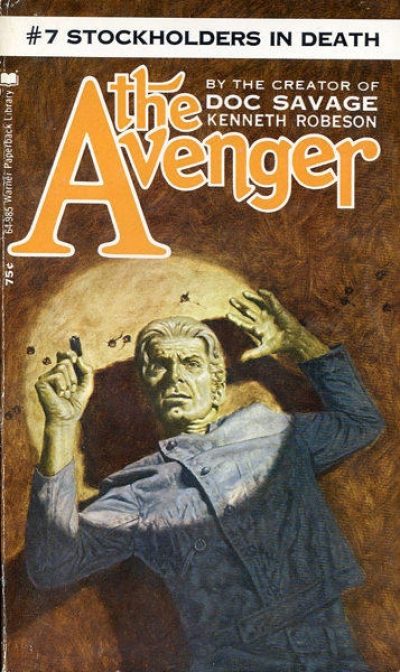 Since I was only vaguely aware of the realities of pulp-era publishing, I had no reason not to believe the cover blurb’s claim that Stockholders of Death was by the same person, Kenneth Robeson, who wrote the Doc Savage books. Nope. the Avenger stories were written by Paul Ernst and Doc Savage by Lester Dent. Well, most of the stories in the original Doc Savage series.

This is a very short novel and yet it manages to fridge two wives, a little girl, and a little boy in the first part of the novel. In fact, poor Alicia and Alice are dead before the first chapter is over, while Mac’s family died in an unrelated incident before the book even began. It just takes a while for the reader to learn what really happened.

Benson recruits people who, like him, have suffered terribly thanks to criminals beyond the law’s reach. Of course, this means anyone unlucky enough to be romantically entangled with someone who might later join Justice, Inc is probably doomed, which may explain why the in-novel romances are all in-group. So as not to discourage the reader.

Benson and his allies are also alike in being different: each of them has a unique set of useful skills. Benson is rich, freakishly strong, a master of disguise, an experienced adventurer, and an implausibly talented marksman. Mac is a skilled chemist and pharmacist. Giant Smitty is a talented engineer. Later books would add Nellie Grey’s martial arts and inexhaustible supply of gold, and Tuskegee graduates Josh and Rosabell Newton, who often exploited the prejudices of the day to carry out investigations unnoticed. Rounding out the cast would be the exquisitely boring Cole Wilson, who contributed nothing of value except perhaps to provide a future role for some interchangeable white actor named Chris.

Because I thought the books were by the same author who wrote Doc Savage, I was surprised that, in the Avenger books, Benson had allies rather than subordinates, allies with skills he cannot duplicate2. Whereas Doc Savage’s pals were all useful, but because Doc was always just a bit better than any of them, he didn’t really need them.

I doubt Ernst spent much time on this story. The prose is very straightforward, sometimes repetitious, and all too often clumsy. The bad guy’s grand plan is needlessly convoluted. Perhaps I am being a little harsh on the fellow, since the only reason his plan didn’t succeed was the dumb luck that had Benson and family board the plane at the last minute. Oh, and the coincidence that Benson stayed in the washroom long enough that the plane was over populated land, which made throwing him out of the plane impractical. Um, and the fact that Benson was one origin story away from becoming a superhero. And that the vengeance-obsessed millionaire was the sort who liked to collect talented friends. Really, except for all the things that went wrong, the plan was practically perfect in every way3.

Still, it’s a very energetic book and I ate up it (as well as the first twelve books in the series) like candy. I mean, like a sugar addict inhaling candy.

1: I am not at all sure what happened to Alicia’s dying mother. As far as I can tell, she is never mentioned again after the family boards the plane.

2: Benson was, I think, sometimes called a master of escape, but everyone in his group was also a bit of Houdini. This is because they are all experts at getting captured and tied up by criminals who have reasons not to simply shoot prisoners out of hand. Not that simply shooting Benson and company ever works.

The team also has a diverse set of views about killing people. Benson, who is otherwise a pasty-faced John Wick, hates killing people directly. Instead, he uses his improbable marksmanship to knock people out with exquisitely aimed bullets. (Nobody ever sneezes at the wrong moment.) For a chosen few, Benson sets elaborate traps that depend on enemies acting out of pure malice and self-interest; all they need to do to stay alive is not be terrible people. Mac, on the other hand, removes one gangster from the stage with a bit of well timed car-fu. If he is at all bothered by having sent a man head first through a windscreen, he manages to conceal it well.

3: Better than Mac’s method for avoiding head-shots, which was to wear his hat a bit high and hope the would-be assassin’s shot didn’t come in a little low.