When Royce offered to send this to me, I accepted enthusiastically, 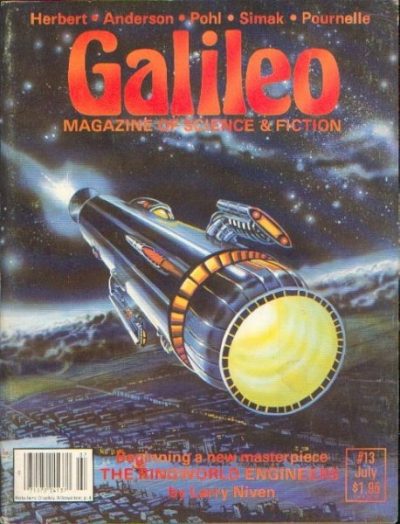 both because I once owned it and because I had confused it with this issue of Galileo:

While it wasn’t what I expected, there was still some interesting material in there.

First, some context: this came out about ten years after Apollo 11 landed on the Moon (thanks to how magazine dates work, probably about nine years and 11 months after) and that was a very different time from now: The American economy was in the doldrums and had been for some time, gas prices were soaring and a Democratic Party outsider nobody saw coming had taken the Oval Office after a disastrous Republican administration. At this time the Russians had a monopoly on crewed spaceflight, although the Americans had a lot of hope for a new crewed spacecraft slated to fly some years down the line. Oh, and the fate of the space station was in doubt.

At this time I was an avid collector of Analog (and Galaxy, and Galileo, and Asimov’s) and I did at one time have this issue, which I read sitting outside on the green next to UW’s Campus Center (Now the Student Life Center and no longer in the control of the students, I believe), which makes me wonder ​“if I can recall where I read a magazine 35 years ago, why the hell when I put my glasses down a few minutes ago can I not remember where they are?”At the time I preferred Bova’s term as editor to Stanley Schmidt’s.

I am not a poetry guy although oddly I am sort of a lyrics guy. It does not make sense to me either.

6. ​“Ten Years After: Where Do We Go from Here?” : [Editorial (Analog)] essay by Stanley Schmidt

Schmidt considers the state of US crewed flight (on hiatus, future doubtful), expresses belief space is necessary for Man’s Future, hopes that we will return to it (or really, the US; the Russians were soldiering on just fine without them) and a fear that humans or rather Americans won’t.

I am not 100% sure he was completely clear that the set of Americans and the set of humans were not identical but he was writing for an American audience and any foreigners who happened to read this were not in the target market. It’s pretty standard stuff; I think you could write a six line FORTRAN program to create editorials, complete with either the Heinlein quotation used here or perhaps the Tsiolkovsky.

Middle section of a story about a nefarious plot to engineer a native uprising that will justify taking a planet away from its natives, set against a backdrop of an impressive climb.

“None of our agents possess the mountaineering credentials to climb Kyle Murre’s Tree, to begin with. You are going to Kyle Murre in order to make that climb. Does that sound like an acceptable cover for Kyle Murre?”

“Yes, sir. One goes to Kyle Murre to climb the Tree.”

I did wonder if James Cameron had ever read this, because there’s a faint similarity to Avatar. Probably just parallel thought processes.

The gem of the issue and I mean that unironically. Bainbridge and Wyckoff wrestle with the thorny issue of government-financed space-exploitation and the unfortunate fact that Americans by and large were indifferent at best to it; one study they cite has 11% of Americans pushing for more funding, 37% satisfied with the level of funding and a whopping 53% convinced too much was being spent (As one would expect, Democrats were more in favour of space efforts than Republicans). This is reflected in funding for space, which is far below its 1960s peak in absolute dollar values and declining if you take inflation into account.

The angle they decide to take is to look for issues that can be used to get Americans interested in funding space again and on the basis of a poll taken in Seattle they distill the possible issues into these factors: Colonization, Emotional-Idealistic, Economic-Industrial, Military and Information. After manipulating their data for a bit, they come up with this ranking:

They are also aware that a regional poll may not represent the US as whole and make some effort to correct for that, thus the second column (of course, it’s based on the first one so if that is crap so is the second). Eye-balling it I would say what we actually saw over the next 35 years was pretty much what we should have expected from these results: research satellites, communications satellites, spy satellites and lots and lots of space probe, with comparatively smaller accomplishments in the field of crewed space flight.

(Granted, nobody who would be writing an article like this would have expected the shuttle to turn out to be such a dog)

Watching them laboriously massage a hilariously small data set allows a modern viewer to better appreciate how much easier this sort of thing is with modern computers and modern software. This is like watching someone use chopsticks to eat peas for the first time.

Unfortunately I think not only is the low hanging fruit in the Economic-Industrial already harvested, leaving only potential activities that for the most part don’t pass the sniff test, a lot of space advocacy focuses on the bottom half of the list, the strategy least likely to appeal to the masses (of 1979).

The pair are aware of Soviet and other space programs but that is not the focus of their paper.

“A Few Last Words for the Late Immortals” : short story by Michael Bishop

An alien wanders around the relics of extinct humanity, working out how it was we managed to do ourselves in.

I’ve read variations on this before and I expect better from Bishop.

An inquest into the death by misadventure of a researcher whose time portals turn out to be far too high bandwidth reveals why those kids in Jurassic Park should have stayed way the hell away from the sauropods; even a friendly little nibble will leave a human in parts.

A brief biographical piece on the artist whose work graces this issue.

The ever enthusiastic Stine talks about a device he saw 17 years previously that could use electromagnetic fields to allow someone to hear sounds regardless of where the device was attached to the body. He sees the potential mainly in terms of human/computer interfaces and not hearing aids, which is where I immediately went.

A castaway finds the program of interspecies communication in which he is a subject has been sabotaged by his companion’s murderous religious mania.

Dispatched to buy beer, the protagonist instead gets drafted into an interdimensional war.

I… I had such fond memories of this but when I reread this I find a protagonist who has a Special Destiny, a dumpy girl who turns into a hottie by letting her hair down, and one of those ​‘end on a lame joke’ endings. My lower lip is not trembling, I have a tic.

That said, I still think Del Rey missed a bet when they dumped him during the Purge, and Baen did too when they did not immediately snap him up. Given the obvious similarities between him and Niven, it seems like it should have been a no brainer.

This is one of those stories where a naïve Earthican accidentally foils an alien invasion. Yeah.

Some of you may have noticed me screaming yesterday. It was the prose in this that was the cause. It’s just on that magic cusp of ​‘genuinely terrible’ and ​‘not quite bad enough to make me stop reading.’ I think a better writer could have done something with this – there’s definitely the seed of a story here — but Correy was not that writer.

Any doubts that Lee Correy was Harry Stine, which I don’t think was particularly secret, would have been removed by the fact he references the same gadget in this as he did in his non-fiction article.

“One Way From New York” : short story by Lee Robinson

A skilled and well-paid technician destroys his career demonstrating a previously undocumented application of teleportation technology.

In brief, it’s what happens if the guy in Think Like a Dinosaur refuses to. It predates the more famous story by quite some time but belongs to a lineage that goes back to at least the 1940s so don’t read much into the similarity between this and Think Like a Dinosaur.

In which he reviews Handbook for Space Pioneers by L. Stephen Wolfe and Roy L. Wysack , The Schimmelhorn File by Reginald Bretnor, Beloved Son by George Turner, Jules Verne by Peter Costello, Infinite Dreams by Joe Haldeman, The Holmes-Dracula File by Fred Saberhagen, The Mask of the Sun by Fred Saberhagen, Ensign Flandry by Poul Anderson, andThe Dreaming Jewels by Theodore Sturgeon.

Reviewing reviews is too meta for me but I do have fond memories of some of these books. I now wonder how magazine reviewers in this particular niche seek out books to review: are they given a whole stack from which they select a promising sample or do they just review what ends up on their plate? I do the second but I think if I could do the first I would want to pour bleach into my brain less often.