A Night in the Lonesome October is not Roger Zelazny’s final novel1, but it was written in a decade when he mainly focused on collaborations. It was the last novel he wrote without a partner.

It’s also pretty good, which is fortunate for me because I would hate to have to write a Graveyard Orbit review of an author’s last book if that book was … ah … not up to their usual high standards.

Every year, in the month leading up to the last full moon in October, two factions — the Openers and the Closers — gather to determine the course of the world for the next year. It is in their power to determine which eldritch gates will be opened or very firmly closed.

In 18872, that last full moon fell on Halloween, which, one must admit, is a very good date on which to determine the fate of the world.

The participants are not always named, but they are all archetypes with whom readers will be familiar: the brilliant professor and his Monster, the Balkan aristocrat with an affinity for bats and a dislike of sunshine, the mad Russian Monk, the Great Detective, and of course the Londoner Jack and his marvellously sharp knife.

But this story isn’t about Jack. It’s about his dog, Snuff.

Over the course of thirty-one short chapters, the players gather their magical tools, carry out their arcane calculations, try to identify who is a Player and who simply had very bad luck picking a vacation spot, work out who is an ally and who an enemy.

Work out who is to be ignored, who should be befriended. and who needs to be quietly murdered …

Have I mentioned that I have a huge Zelazny blind spot? Somehow, despite being a voracious SF reader, I have managed to miss many of his most famous works. It was not until the early 21st century that I read his classic ​“A Rose for Ecclesiastes.” It doesn’t help that I am strangely unable to remember much about the Zelazny books that I have read3. Consequently I have a shelf of broken-spined or well-thumbed Zelazny books that I have clearly read … but that might as well be unread for all I remember of them.

The book under review is not one of those. I am sure I have never read it. I knew about it. I knew that many people loved it but I never got around to reading it myself. In my defence, many people also loved Amber, to which I am completely indifferent4. And if even if I had read Lonesome October, it might have slipped out of my memory the way the Thing in the Circle—but that would be a spoiler.…

Now that I have read A Night in the Lonesome October, I hope I manage to hold onto these memories. This is one of Zelazny’s quietly perfect works. Other people, some with great bushy beards and reputations as comic geniuses, have tried their hand at what amounts to affectionate fan fiction, but few of them have ever succeeded quite as well as Zelazny does here. Partly it is because Zelazny trusts his readers enough not to over-explain. Partly it’s that Snuff and his furry, feathered, and scaled pals give the reader an interesting and far from conventional point of view.

I consider this a solo work, but if someone else wanted to argue that Gahan Wilson’s illustrations are an intrinsic and essential part of the A Night in the Lonesome October experience, I would understand.

Speaking of art, there’s an interesting difference in which characters American editions highlight on the cover: 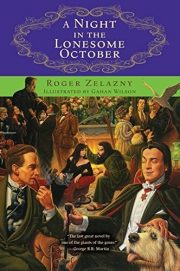 and which characters Orbit felt needed to be on the cover: 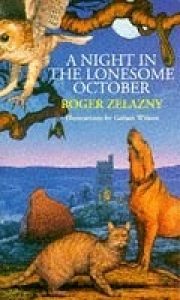 If you’re looking for a charming Halloween-appropriate book, then this is one of the books you should consider. A Night in the Lonesome October is available from the Chicago Review Press.

1: Which book was his final one depends on what you mean by ​“final.” Ignoring collections of previously published work, the final book to which Zelazny contributed that was published while he was alive was his 1995 collaboration with Robert Sheckley, A Farce to Be Reckoned With. The final collaboration with his name on it to appear was the Jane Lindskold/Roger Zelazny novel Lord Demon, which appeared in 1999, four years after Zelazny’s death.

2: Well, 1887 is my best guess for which year in the 19th century this is set. Figuring out why I settled on that year is left as an exercise for the student.

3: The exception being Doorways in the Sand.

4: Just in case you were wondering …I found the Betancourt Amber prequels disappointing. It’s not that they fail to live up to a beloved classic. They failed to live up to something to which I am profoundly indifferent.

5: I could not find a Kindle edition for this, although they have other books by Zelazny. Oddly, SF Gateway does not have any Zelazny at all and neither, as far as I can tell, does Kobo.