Even as the embers of the House are cooling, ancients Malach and Athena retrieve the surviving Scarabae. The hapless Rachaela is carried along in their wake. The Scarabae have vast resources. The loss of the House is merely the latest forced relocation among many. The dead cannot be saved but the Scarabae can rebuild.

Rachaela’s demon-child Ruth, last seen fleeing from the corpse-filled House Ruth herself set on fire, has no interest in joining her family in their new stronghold, wherever that may be. She has an entirely different goal.

Ruth sets to find mother-figure Emma Watt. At house after house, she discovers that her information on Watt is out of date or wrong. Emma Watt is never there to greet her. Instead, there are a variety of foolish, unpleasant, and very unfortunate victims-to-be. Perpetually dissatisfied with what she finds, Ruth leaves behind her a trail of bloody carnage and burning homes.

Ruth is many things but subtle is not one of them. It does not take long for the police to realize they have a serial killer on their hands and not much longer for Malach to realize the killer has to be the missing Ruth. Briefly captured by the police, Ruth is handed over to Malach; can Malach succeed where others failed and instill in Ruth some degree of decorum?

Meanwhile, Rachaela’ is caught very firmly in Athena’s orbit and enjoying a strange education of her own.

The good new is there’s less incest in this volume than there was in Dark Dance . The bad news is there is still a homicidal, hypersexualized tween. Ruth spends her time screwing and then murdering various non-kin. At least it’s clear that the author disapproves.

The Scarabae appeared a rather addled lot in the first book. Personal Darkness presents the family as a significant power, a group whose mere name makes the police cower and hardened gangsters pale (and sometimes die abruptly). It may be that the colony — the hive — in Dark Dance was where the Scarabae tucked away their less capable relatives.

I have no idea what was up with the original cover of this book. 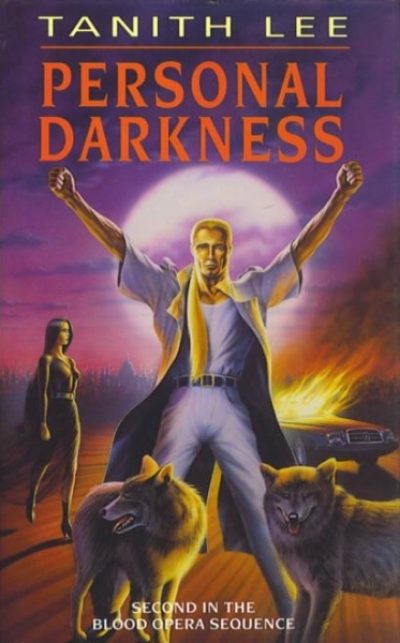 It looks like some of the sub-standard cover art from under-financed role-playing game products of the period.

Ruth’s victims are for the most part an unsympathetic lot. Ruth does make a point of saving the family pets before she sets fire to the homes of her victims. She even spares people whom she sees as victims themselves. In the end, however, this little quirk of mercy cannot conceal the fact that Ruth is a mad, empty little monster. Even after considerable effort is invested in her education, she instinctively reverts to form.

As for Rachaela … she is bewitched by the hermaphroditic Athena, but it’s more an irresistible compulsion than something that brings Rachaela great joy. She does at least get to exercise control over her own reproduction. She was denied that in the first novel.

Personal Darkness is less lurid (or at least differently lurid) than Dark Dance. I cannot say I enjoyed reading it, but I must admit a certain train-wreck-gawking fascination to the series. Where exactly the third book will take Rachaela, I cannot even speculate.

Personal Darkness seems to be out of print in North America. There is, however, a British edition.