As a teen, I was shallow enough that a silly surname like “Moorcock” was enough to steer me away from reading any Michael Moorcock novels. Pity, because whoever stocked the University of Waterloo's bookstore's F&SF section in the 1970s really loved Moorcock. My chronic search for reading material would have been greatly aided had I taken advantage of the opportunity. Ah well.

I did read some Moorcock. Some of those I read were Moorcock's tales about that pallid emo wally, Elric of Melniboné. And where best to start with Elric but at the beginning of his reign, as portrayed in 1972's Elric of Melniboné?

Pale and beautiful, Elric VIII, 428th Emperor of Melniboné, rules over an empire ten thousand years old, and centuries past its peak. Once the inhuman Melnibonéans ruled through sorcerous might ... but now Young Kingdoms are rising, and the glory days of the Empire are a fading memory.

Unlike the majority of his decadent people, the pale, frail emperor has a rudimentary moral sense. Elric may follow the cruel customs of his people, but he is at least aware how cruel they are. As well, his people may indulge in dreaming and decadent delights, but Elric loves only his cousin, Cymoril.

Elric's dependence on performance-enhancing drugs, his moral qualms, and his unwillingness to use his impressive sorcerous skills to crush the humans of the Young Kingdoms make him unfit to rule. Or so Cymoril's brother Yyrkoon believes. When Elric is wounded while fighting barbarian pirates, Yyrkoon sees his chance. Tipping his still-living cousin into the sea, Yyrkoon takes the throne for his own.

It is just too bad for the ambitious Yyrkoon (Melniboné now! the rest of the world later!) that Elric does not drown after all. Rescued from certain death, Elric returns to retake his throne from the usurper.

Elric's return is only partly successful. Under cover of a dense mist, Yyrkoon and his closest allies flee Melniboné, taking with them Cymoril (for whom Yyrkoon's feelings are distinctly unbrotherly). Elric's sorcery fails him: Yyrkoon vanishes into the Young Kingdoms.

To find his rival, to save his lover, Elric has no choice but to use his imperial prerogative and call on his people's dread patron: Arioch, Duke of Hell and Lord of Chaos.

The Elric Saga is part of a much greater Eternal Champion sequence, in which heroes find themselves playing crucial but unpleasant roles maintaining the balance of the universe. I am poorly read in Moorcock so cannot comment beyond that.


There have been some nice covers for Moorcock's books over the years but I don't think Whelan's cover here is one of them. I prefer the Gould cover for the 1983 Berkley printing 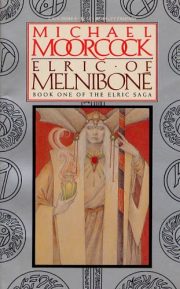 but alas, that is not the edition I own.


Moorcock is drawing here on novels like The Broken Sword; I expect he was also influenced by popular sword and sorcery characters like Conan, characters who are generally not overburdened with self-doubt 1 —something Elric has in spades. I suspect that Moorcock drew on real life as well. At least, I strongly suspect the decrepit state of the Melnibonéan empire owed a lot to the state of the British Empire 2 post Winds of Change and post the Suez Crisis. Though real life was worse; Melniboné was not reduced to providing one of the Young Kingdoms a convenient place to park their planes.

Based on another (older) Moorcock novel I recently received, I was expecting to snark that Moorcock was able to fit an entire sword and sorcery novel into just 160 pages by leaving out luxuries like characterization. In fact, Moorcock does dabble a bit with characterization, particularly in the early part of the book when he is establishing the friction between Elric's personal inclinations and what his position requires him to do.

Poor Cymoril, on the other hand, does not get much depth. Her role is to be kidnapped and imperiled over and over. In fact, Moorcock could have replaced her with a poker chip (one that both Elric and Yyrkoon coveted) without much affecting the plot. I was a bit surprised to discover that she managed to make it through the whole book without getting killed. I suppose that happens later on (in the internal chronology of the series).

Speaking of surprises, while Elric is every bit the gloomy emo tit I remembered, it turns out he's a lot stupider than I recalled, at least where dealing with Yyrkoon's backstabbing syndrome is concerned. In his defense, Fate has Plans for Elric and to his credit, he does his best not to blindly serve beings he knows to be malevolent and destructive. This is particularly difficult once he gets his hands on the soul-eating demonic sword Stormbringer and more to the point, once it gets its claws on him, so points to Elric.

Elric may be Moorcock's most popular character; he features in comic books and songs. Attempts to bring Elric to the silver screen have thus far failed, although I believe efforts are ongoing. There have been several Elric roleplaying games; Mongoose's Elric of Melnibone: Magic of the Young Kingdoms is merely the most recent of which I am aware.

Elric of Melniboné is contained within Elric: The Sleeping Sorceress.

1: Howard's King Kull, OTOH, has the misfortune to be a Howard character in a Lovecraftian universe.

2: While this novel is disco-era, the series itself started in the 1960s. Even this novel is a bit too early for me to draw parallels between Elric and Callaghan on one hand and Yyrkoon and Thatcher on the other....