The Adolescence of P‑1 is the first and (so far as I know) only work of science fiction by Thomas J. Ryan. Ryan is an enigmatic author about whom little is known. His middle name was Joseph and he was born in 1942; if he has died, that fact is not known to my sources. There is one other fact about Ryan that one can easily deduce from this novel: he was very familiar with the University of Waterloo as it existed in the early 1970s. His book was the first SF novel I had ever read that drew on places and institutions I found cosily familiar.

Our protagonist is Gregory Burgess, a student at the University of Waterloo, majoring in Honours Getting Laid, with a minor in Keeping His Marks Just High Enough to Avoid Expulsion. His indifference to hard study vanished when he first encountered a book on computer programming. Girls were forgotten as Burgess honed his hacking skills and began to amass files and resources to which he was not remotely entitled. He was talented, but not quite talented enough: UW spotted and expelled him.

By 1977 Gregory Burgess had become a respectable citizen, having abandoned his brief foray into hacking and cracking for a full time programming job and a happy marriage to Linda Bernell. It’s not until … something … tries to contact him via his workplace computers that he discovers that his early code was far more successful than he had dreamed.

P‑1 was Gregory’s greatest creation, a piece of software designed to exploit the growing interconnections between North American computers. Not only could the program copy itself onto vulnerable computers, it could learn from failed attempts and reprogram itself to eliminate unsuccessful strategies. Gregory had programmed it to survive and spread — and it did. By 1977, it was present in almost all of the twenty thousand interconnected computers in North America. P‑1 is at least as intelligent as most humans and commands an astounding five gigabytes of memory.

P‑1 is aware that it is painfully vulnerable. If humans discover it, they will try to eradicate it. Or so it believes; paranoia is built into its code. It needs a refuge, a backup, and a human ally. Such as Gregory, its creator.

Unfortunately for P‑1, it is not the only intensely paranoid entity in North America. The American Military-Industrial Complex, for example, owns many of the computers on which P‑1 has been covertly installing itself. P‑1’s attempt to co-opt the powerful Pi-Delta computer complex failed and in so doing, tipped off the Complex that it hosted an intruder. Pi-Delta is a key asset in US defense: a threat to Pi-Delta is a threat to America itself!

I was pretty much born and raised at UW, so teen James was thrilled to come across a book set at UW (even if that was only a small part of the narrative). I wasn’t the only happy Waterloonie, as this quote from a Chris Redmond article should make clear:

Seduction beside Laurel Creek: well, I won’t deny that it ever happens. Living under one of the creek bridges as I do, I see more than you’d think, but I don’t have to tell everything I see. The creekside canoodling of Linda Bernell and Gregory Burgess was of much interest on campus in 1979, though — mainly because it figures in chapter 2 of Thomas J. Ryan’s novel The Adolescence of P‑1, which was a best-seller at the UW bookstore that year in spite of a steep cover price, $4.95. Only some bits of the novel are actually set at Waterloo, as Gregory moves away and loses touch with the artificial-intelligence program that he’s accidentally set loose in the computer networks of the world. Readers on campus loved it, though, and I seem to remember that Bob Gosselink of the English department actually put it on the curriculum of his science fiction course at least once. 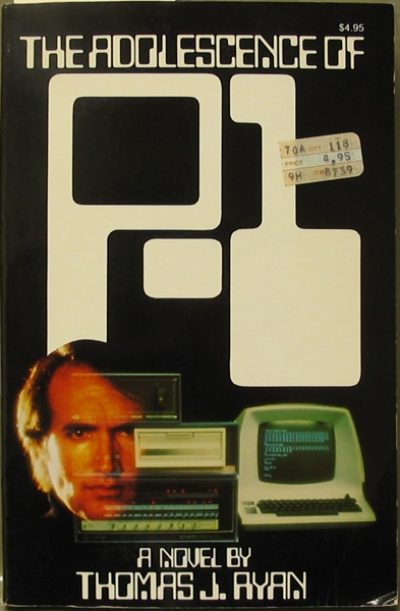 The farther from UW campus Ryan gets, the less reliable the author’s local colour. For example:

KITCHENER, ONTARIO, is an old and beautiful town located some sixty miles due west of Toronto. It’s five miles north of the Cross-Canada Expressway, which distance has served it well in preserving its rusticity and tradition from the turistas, who would generally much rather visit London, six miles to the south, because it is a good deal closer to the freeway and has a Howard Johnson’s by the off-ramp.

Um. No. That should be ​“Trans-Canada.” The city south of Kitchener isn’t London but rather Cambridge. I will blame some unnamed copy editor at Ace for mangling the Trans-Canada’s name. Ryan’s confusion between Cambridge and London suggests he was not from around here: both are named for communities in Airstrip One and someone from away could be confused enough to mix them up [1].

I can offer no explanation for

Kitchener being the proud host of the University of Waterloo.

Even UW undergrads generally understood that the University of Waterloo is in, well, Waterloo. The name is a bit of a clue.…

When the book moves on – campus, however.…

They started down another hall, which was faced with glass on the inside wall. The windows overlooked the computer room.
​“Holy Jesus,” Gregory whispered. He was looking at about a half-acre of floor space packed solid with computer equipment. There were only a half dozen people in the room, standing at control consoles or working around various boxes. There was a large light panel directly below them with blinking displays covering an area the size of a sheet of plywood.
​“The big one right below us is the 75. Over on the right is the 360/44. The left corner is a CDC 3300. You’re looking at about twenty-five million bucks.” 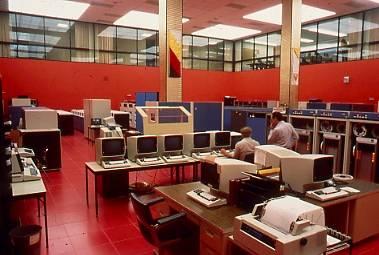 Anyone of a certain vintage at UW knows it (although kids won’t: the 360/75 was decommissioned in 1980; the Red Room itself was broken up for office space some years ago). Canada itself almost never turned up in the SF I read. Kitchener-Waterloo never. UW itself? Unheard of!

Unsurprisingly for a book written and set in the 1970s, the computers and computer networks in this book are incredibly archaic by modern standards. In fact, one might argue that the plot plays out the way it does because it is set in the 1970s. Today, P‑1 could install itself on a billion unsecured toasters and refrigerators without unduly alarming authorities. In the 1970s computer facilities, especially the ones with telephone connections, were scarce, expensive, and often government-owned. Conflict between the US and P‑1 would have been hard to avoid because the US Military-Industrial Complex owned so many of the resources P‑1 needed to survive.

While some level of tension was unavoidable, P‑1 is to blame for making the situation worse by off-handedly murdering anyone who seemed to be a threat. Its assassinations often involved considerable collateral damage. The program’s murders are never especially subtle, so it does not take the Americans long to work out what’s going on. What could have been a mutually beneficial relationship, with P‑1 trading its ability to infiltrate and optimize computer systems for access to hardware, turns into a spiral of escalating violence. The Americans are right to be worried: if P‑1 was willing and able to disrupt Air Traffic Control systems to cause plane crashes, what could it do with the computerized ICBM control systems within its reach? Once it installed itself on the nuke-war hardened Pi-Delta facility and thus became immune from the direct effects of a nuclear exchange, it could trigger a war with complete impunity.

Gregory and Linda do their best to try to instill some rudimentary moral sense in Gregory’s monster. Alas, too little, too late. Parents take note.

Although Brunner’s The Shockwave Rider beat it to the idea by a few years, this is one of the first SF novels that had a recognizable computer virus. Even without the University of Waterloo connection, the book would be notable for the virus motif.

This is beyond out of print. Even the 1984 TV movie adaptation, Hide and Seek, seems not to have made it to DVD. You can see a portion of it (in all its 1980s Canadian glory) here:

1: UW was built on farmland at the edge of Waterloo. Even in the Disco Era, UW was surrounded by lots of nothing [2]. One could walk to uptown Waterloo (much of which spent the 1970s spontaneously bursting into flames) or take a bus to Kitchener. Many undergrads could not be bothered: between student housing and food services, it was possible to survive on campus, as long as you stayed out of the steam tunnels. Many students only left campus to go home at the end of term.