1965’s The Year of the Unicorn takes us back to the Witch World, across the ocean to High Hallack. Gillan has lived among the people of that land for almost as long as she can remember, but her skin and hair brand her an outsider. She can be thankful that she is not one of the hated Alizon, High Hallack’s great enemy, but she can never hope to be truly accepted by those among whom she lives. A quiet life in a rustic abbey may be Gillan’s best option.

But that is not her destiny.

To defeat the Alizon invaders, High Hallack had allied with the Were Riders, strange and powerful remnants of an old and weird race of men. That alliance came with a price: at war’s end, the men of the Were Riders were to be given thirteen brides from High Hallack’s aristocracy.

Fearing for the life of a particularly frail bride, Gillan secretly takes the young woman’s place. Better to embrace risk as bride to an unknown groom — whoever or whatever he might be — than accept the certainty of life wasted in an obscure corner of a land not hers.

The Were Riders, men all, number more than thirteen; some will have to live without brides. The matching of bride and groom is done by Rider magic … which matches Gillan with Herrel. This is an affront to the other Riders, for Herrel is deemed the least among them. From Gillan’s point of view, Herrel seems no worse an arranged husband than many and better than some. He is someone who could be a tolerable partner, with time and patience.

The Were Riders are ancient beyond reckoning. they are masters of magic beyond their already impressive ability to don new shapes as they please. Centuries of experimentation and self-indulgence have left the Were Riders jaded; many of them have forgotten how to take joy in simple pleasures or in the happiness of others. They are still capable of jealousy over another’s good fortune, of spiteful revenge aimed at an innocent whose only crime was to be won by someone else.

Gillan is not as defenseless as she seems. She has gifts of her own, gifts that until now she has never had to truly master. Gifts she can credit to her lost mother’s people, the witches of Estcarp.

But first, a digression! I linked to the earlier cover I could find but the actual cover of the book I read looks like this: 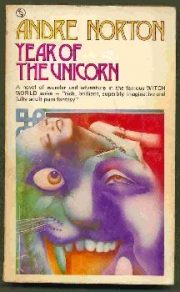 Truly, I can see why certain people long for the old days, when you could judge a book by its cover.

I have to warn readers that while there are doppelgangers, shape-shifters, and other magic beings in this novel, there don’t seem to be any actual unicorns. It’s just the name of the year the current year, like the Year of the Fruitbat or the Century of the Anchovy.

To modern eyes, the way in which Gillan chooses to exercise agency — by agreeing to be a bride-hostage to spare another woman from that fate, and later by doing her best to forge a worthy marriage with the stranger to whom fate has given her — might appear rather constrained. By the standards of her adopted cultures, both High Hallack and Were Rider, she is being bold indeed.

At the risk of enraging the legion of Witch World fans, I must point out that this is yet another Norton novel in which the Fates (that is, the author) don’t let characters fumble their way through the plot [1]. The plots are driven by Fate, magic, and geases, magic compulsions. I suspect that this was less because the author had some grand design in mind for the Witch World and more because Norton’s novels were comparatively short (constrained by the publishing standards of the time). She didn’t have a lot of space to waste getting from Point A to Point B. That said, though there are several such authorial fiats in this book, beginning with the magic that matches Gillan to Herrel, Gillan is much more than a cork on the river of destiny. Her eventual reward is due to her boldness, cunning, and craft.

This novel is mentioned in the passage from ​“On Writing Fantasy” that I have quoted before:

Year of the Unicorn, it was my wish to spin a story distantly based on the old tale of Beauty and the Beast. I had already experimented with some heroines who interested me, the Witch Jaelithe and Loyse of Verlaine. But to write a full book from the feminine point of view was a departure. I found it fascinating to write, but the reception was oddly mixed. In the years now since it was first published I have had many letters from women readers who accepted Gillan with open arms, and I have had masculine readers who hotly resented her.

As Norton explained earlier in the same essay, there was a distinct lack of women in the speculative fiction of this time, except as prizes for the heroes:

These are the heroes, but what of the heroines? In the Conan tales there are generally beautiful slave girls, one pirate queen, one woman mercenary. Conan lusts, not loves, in the romantic sense, and moves on without remembering face or person. This is the pattern followed by the majority of the wandering heroes. Witches exist, as do queens (always in need of having their lost thrones regained or shored up by the hero), and a few come alive. As do de Camp’s women, the thief-heroine of Wizard of Storm, the young girl in the Garner books, the Sorceress of The Island of the Mighty. But still they remain props of the hero.

Only C. L. Moore, almost a generation ago, produced a heroine who was as self-sufficient, as deadly with a sword, as dominate a character as any of the swordsmen she faced. In the series of stories recently published as Jirel of Joiry we meet the heroine in her own right, and not to be down-cried before any armed company.

Norton’s not quite correct that Jirel was unique but Norton is close enough to being correct that I can understand why women reacted to this particular novel so favourably.

The alarm many men felt at a perspective other than their own being acknowledged is also, sadly, comprehensible or at least familiar; it’s the sort of reaction we should be able to point and laugh at as the foolish prejudices of a bygone era, If only those prejudices had not manifestly survived to the present day.…

It is true that almost all of the men in The Year of the Unicorn are self-centered monsters and bullies. That might have been what annoyed some of the male readers — though I suspect that the male readers who objected wouldn’t have necessarily seen these characters as unalloyed monsters. Bullying? revenge? purchased brides? Sexual harassment? Hey, a man’s gotta do what a man’s gotta do [2]. Historical accounts of acceptable practices at the cons of this era [3] suggest that what to modern eyes might appear as pointed critique would not have blipped the radar of the cranky men reading this book in the mid-1960s.

The Year of the Unicorn was successful enough that it encouraged Norton to continue her experimentation with female protagonists.

But I was encouraged enough to present a second heroine, the Sorceress Kaththea. And since then I have written several more shorter stories, both laid in Witch World and elsewhere, spun about a heroine instead of a hero. Perhaps now will come a shift in an old pattern; it will be most interesting to watch and see.

2: This would have been back in the days when authors like John D. MacDonald tossed in the odd gang-rape as a hilarious comeuppance for a female antagonist. Such objections as there were to such turns of plot seem to have been objections to trespass on male property (the victim) rather than objections to the mistreatment of women.

3: I would like at this juncture to acknowledge that some modern cons certainly do everything in their power to react appropriately to harassment, once all other alternatives have been exhausted. Provided the culprit isn’t a big name in the industry, a SMOF, or a friend of the concom. Baby steps, baby steps!