C. J. Cherryh’s 1976 novel Gate of Ivrel wasn’t the first Cherryh novel that I read, but it was the first one I read that I liked.

Exiled for killing one brother and maiming the other, Vanye can expect a short and brutal life as an outcast. What he does not expect is that he will inadvertently free Morgaine Frosthair from the mysterious qujalin mound known to the backward locals as Morgaine’s Tomb. This was no tomb, but temporal trap. The artifact has held Morgaine suspended in time for an entire century, ever since her last grand adventure ended in disaster and rout.

Vanye’s reward is obligatory servitude to Morgaine. Decades may have passed since Morgaine last walked this world. but her task is not yet done.

What Vanye calls qujalin Morgaine calls qhal and what Vanye and his people think of as magic, Morgaine thinks of as Sufficiently Advanced Technology. The specific form of qhal that concerns Morgaine are the qhal Gates. The Gates span space and time. On the one hand, qhal Gates could be used (and were) to establish a vast empire across the whole universe. On the other hand, this only worked until …

someone, somewhen, backtimed and tampered — perhaps ever so minutely.

The whole of reality warped and shredded. It began with little anomalies, accelerated massively toward timewipe, reaching toward the ends of Gate-tampered time and Gate-spanned space.

Time rebounded, indulged in several settling ripples of distortion, and centered at some point before the overextended Now.

At least, so the theorists from the Science Bureau surmised, when the worlds that survived were discovered, along with their flotsam of qhal relics that had been cast back up out of time. And among the relics were the Gates.

The qhal empire was destroyed in the aftermath of the timequakes, but its lethal legacy remains. Morgaine is just one of a legion of volunteers dispatched by Union to find all the surviving Gates and shut them down (before someone uses the Gates and ends reality). None of the volunteers will ever see their homes again; most do not even live to accomplish their mission.

Morgaine failed in her first attempt to shut down Ivrel’s Gate. The army who fought with her is long dead, replaced by one exile. Cast as villain by legend, her name alone is enough to get her killed. And worst of all, someone who knows far too much about qhal technology has taken it for his very own. He’s had a century to get ready for Morgaine’s final desperate attack.

ISFDB informs me that this was Cherryh’s debut novel, something I had managed to forget (because I read her novels out of publication order).

I also completely forgot that the DAW MMPB edition I own comes with a glowing introduction from Andre Norton herself. In retrospect, this isn’t surprising. Not just because a glowing review from Norton would certainly have boosted Cherryh’s sales, but because this is in many ways a very Norton-like novel. More specifically it’s a very Witch World-like novel: inter-dimensional gates link high-tech realms with settings out of a standard fantasy novel; relics promise power but deliver doom. The fight against body-stealing monsters is handicapped by the fact that the good guy’s allies are a bunch of depressed, twitchy, aggressive barbarians.

Gate of Ivrel reverses some Norton tropes. In the Witch World novels, the focus is squarely on the human characters, not their supernatural allies. In Cherryh’s book, while Vanye may be the viewpoint character, while his relationship with his family is foregrounded, it is Morgaine whose decisions, whose mission, drive the plot. Vanye is less of a protagonist and more of a plucky sidekick.

Cherryh’s prose also seems more ambitious than Norton’s. For example, Cherryh plays with dialect as an indication of the passage of time.

The Science Bureau that sent Morgaine and her doomed teammates out to shut down the Gates is the Union Science Bureau. While that could be the same Union as the one in Cherryh’s Alliance-Union books (the Morgaine books are generally listed with them), I am not sure that this is so. IIRC, qhal is never mentioned in any of Cherryh’s non-Morgaine books. However, I am hardly a Cherryh completist, so pipe up if I have overlooked something.

Gate was followed in short order by 1978’s Well of Shiuan and 1979’s Fires of Azeroth. After a delay of more than a decade, 1988’s Exile’s Gate ended the Morgaine stories. As I recall, the first three books are unified by Morgaine’s quest to deal with the body-stealing Big Bad introduced in this novel, while Exile’s Gate has an entirely different antagonist.

All four books in the series are available in the omnibus The Complete Morgaine. 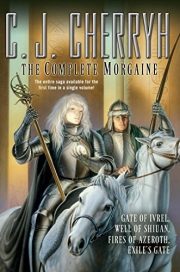 I am happy to report cover artist Whelan has learned to draw armour, rather than depicting Morgaine with the ludicrous battle-bikini he gave her in the 1970s.