Donald Kingsbury has been writing science fiction since the 1950s, but he has never been particularly prolific. In fact, over the seven decades of his career, he has published a mere five novels, five novellas, and an excerpt (so far as I know).

Perhaps the most remarkable of his novels is 1982’s Courtship Rite (also published under the title Geta). I have a few scars thanks to this book 1, but that is not the only reason it is remarkable.

No sensible person would colonize a world like Geta, given a choice. It is arid, poor in many resources essential to advanced technology, and its native lifeforms cannot be digested by terrestrial life. It promises a short impoverished life and eventual starvation to anyone foolish enough to settle there.

The first colonists — marooned? — came from a starfaring civilization, but even that did not save them. The survivors made some hard choices that let them prevail and persist, in the process losing most of their technology and most knowledge of their past. As far as the Getans know, they were placed on Geta by their god to test them. And their god is not grading on a curve.

Human life on Geta is shaped by simple biochemical fact. There are on the world a host of lifeforms, but only ten that humans can digest: eight sacred plants, bees, and humans themselves. Famine is always a possibility. The priest clans hold power because societies with a caste empowered to make hard decisions during famines survive. Kinder, gentler groups have perished.

While adept in the biological arts, Getans are only now rediscovering technologies like radio. The difficulty of long-distance communication, on a world where geography further impedes travel, means that there is no world government. The priestly castes struggle for control over smaller regions, regions like the Njarae Sea. Both the Kaiel and the Mnankrei covet the Njarae. Too bad for the region’s current rulers, the Stgal.

For Kaiel Prime Predictor (clan leader) Aesoe, the contest for the Njarae Sea is also a solution to a personal problem. He is determined to wed the brilliant scientist Kathein, but first he must eliminate his romantic rivals, the Gaet.

The Gaet marriage consists of co-husbands Gaet, Hoemei, and Joesai, and their co-wives Noe and Teenae. The Gaet are an uncommonly effective and intelligent group; they threaten Aesoe’s control of the Kaiel. He schemes to rid himself of his ambitious rivals by commanding them to conquer the Valley of the Ten Thousand Graves, all the way to the Njarae. If they succeed, they serve the clan; if they lose, they die. He expects them to die.

Aesoe adds an extra twist of the knife. Gaet and his family have room for a sixth member (six being the traditional number for a group marriage); that is why they are courting Kathein. Aesoe orders them to court the heretic Oelita the Clanless One. Oelita believes humans did not descend from the sky as legend says but rather evolved from local lifeforms; she thinks murder is wrong; she does not accept raising babies for meat. She would long since be dead were she not so superbly fit and intelligent.

Oelita also holds in her hands the secrets of a concept so long lost that Getans lack a word for it:

This book is set in the same universe as The Finger Pointing Solward. You may be unfamiliar with The Finger Pointing Solward, perhaps because it has never been published . Kingsbury has been working on his magnum opus since the 1950s; he refers to it in interviews and in some of his other works. It may be that Courtship Rite is an example of a novel written to avoid working on a different novel. All I will say is that work avoidance is a powerful tool that can be put to good use.

Courtship Rite tries to be hard SF in biological mode, of which more later, but it is even more an example of fiction that plays with social science. Rather than borrow from past societies as so many other SF novels do , or assume that present day society will continue essentially unchanged for millennia , Kingsbury populates his world with people whose customs are very different2, shaped by the harsh world in which they live. Those customs and values and customs may seem abhorrent, but Kingsbury tries to convince us that they make sense in their proper context3.

Courtship Rite came out to great acclaim. It won the Compton Crook Award, came in first in the Locus Best First Novel and fifth in the Locus Best Novel category, and was a finalist for the Hugo. In the years since, it has been nominated several times for the Prometheus Hall of Fame.

The Hugo awards are an interesting lens through which to look at this novel. Courtship Rite lost the Hugo to Asimov’s inferior Foundation’s Edge. Indeed, the finalist list for that year— The Pride of Chanur by C. J. Cherryh, 2010: Odyssey Two by Arthur C. Clarke, Friday by Robert A. Heinlein, Courtship Rite by Donald Kingsbury, and The Sword of the Lictor by Gene Wolfe — seems to represent a war between fans of genuinely interesting new SF and those nostalgic for the SF of their childhood.

Courtship Rite sits squarely in the first camp but it does draw heavily on some of the traditions of older SF, starting with the novel’s eugenics. Each of the different clans tries to breed itself to fit a different niche. That’s not so unbelievable. What is a bit odd is how successful they are, how easy it seems to be to try to breed for a select set of traits without inadvertently breeding for others as well. Granted, Getans eat the less successful experiments, but still … one would expect side-effects and genetic black swans. One senses the author’s thumb on the scales.

The eugenics, the incessant struggle for survival and position, and the desert world reminded me a lot of a certain other classic. 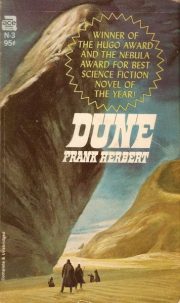 Courtship Rite resembles Dune in another way: length. Dune was unusual for its day, weighing in at 412 pages in hardcover. Most SF novels were shorter; publishers tended to see SF as juvenile fiction for the easily bored and they hesitated to challenge readers. Although longer SF novels had become more common by 1982, Courtship Rite ​‘s 464 pages did stand out.

A modern reader might notice something else about those 464 pages: Kingsbury probably wasn’t using a modern word processor of the sort that makes it so easy to grind out extruded book product. The book may be comparatively long, but it moves briskly, without longeurs.

I found Courtship sometimes — often! — problematic but always interesting. It is odd that this work is out of print and has been so for some time. Not even a recent Baen edition which I am pledged to ignore. As near as I can tell, the most recent edition was the SFBC one of 2006. Before that, there was a Granada edition in 1985. (I am not counting the few non-English-language editions.) I am baffled by the undeniable fact that less interesting works remain in print while this novel languishes. All I can offer you is an unabridged Audible audiobook.

1. No, I was not moved to imitate the elaborate scarification patterns that decorate the characters in this book. It was a lesson learned. If Tanya Huff tells you not to pick up a store cat because it is a biter, listen to her.

2: Granted, certain elements (like the wife husbandry of prepubescent girls) turn up so frequently in Kingsbury books that I don’t think they are there in Courtship because they make sense only in that setting.

3: I am unconvinced that commodified baby meat makes sense, but at least it’s expensive enough that it is clearly a luxury, not a stock food item. I also note that Getans are master genetic engineers, are willing to modify women rather dramatically (one caste is essentially birthing machines, treated like animals and burned out young by hosting other people’s babies), and yet they never come with a better solution to the meat problem than eating each other.