Paul Swenson and his friends see a brief window of opportunity for biomedical experimentation: technology has advanced, antique rules preventing certain lines of research have expired. Assuming that it is better to ask forgiveness than ask permission, they only reveal their project to the world once they have the first successful results to show. Who are:

Biomedical technology may have given the world ectogenetic chambers and artificial wombs; it may have made human cloning possible. It hasn’t given humanity a way to fast-forward the aging process. The only way the clones can become useful adults is the old-fashioned way, one year at a time.

The novel follows the five clones over the course of the first thirty-seven years of their lives, from 2000 to 2037. Their shared genetic heritage no more makes them carbon copies than are identical twins (or in the case of Y‑for-X-flipped Kira, fraternal twins). Their common genes and upbringing will not stop them from taking very different courses in life, as they find rewarding occupations in a world experiencing dramatic transformations.

I know I often spend more time looking at the scenery than the actors, the setting rather than the characters and plot. Presumably you’re OK with that, if you’re still reading me.

I found this book fascinating if only for the contrast between the 2000 – 2037 setting that Sargent imagined and the world that we’re experiencing now. This contrast is evident in the very beginning of the novel, when Sargent reveals that planes are losing ground to heavily subsidized maglev trains. The creation of the Dwight D. Eisenhower National System of Interstate and Defense Highways was a generational effort still ongoing in 1976. It would have seemed reasonable (to an author writing in the late 70s) that US would, if it chose, still be able tackle massive infrastructure projects. Of course, the modern US is no more able to maintain its hardtop than it is able to keep track of where its aircraft carriers are. Ambitious projects like the one Sargent references are clearly impossible in the current context.

But to generalize … Sargent’s 21st century is nicer than ours in three crucial ways.

Oh, there is another difference: Sargent has imagined a world in which all the gosh-wow articles I loved as a kid were actually implemented. Not just in a general, handwaving way; there were some things in the book that reminded me of specific essays I read in those bygone days. Essays that seem to have inspired Sargent as well.

One side-effect of this is that a book whose central focus should be futuristic biotechnology keeps getting drawn to futuristic transportation technology. Thus the starship in a book about clones [1].

The Soviet Union has lingered (in this novel) and nations still vie for prestige. But there’s nothing like the Cold War or the nuclear fears that haunted my childhood. The novel doesn’t really go into detail about how the Cold War ended, but I would guess that the reason is that folks were just sensible. Risking nuclear war was silly, so people stopped doing that.

Having read many disco-era books, I was surprised to discover on rereading this one that Sargent seems to have been aware of the demographic transition. Her early 21st century is one where not only are birth rates falling, but the characters are aware that they are falling. In fact, Sargent seems to have overestimated how quickly they would fall. That would make her an outlier even today; in the context of 1970s SF, so fond of baby cops, harsh eugenics laws, and draconian population control laws, it is astounding.

While Sargent didn’t foresee the fall of the Soviets, she did have some inkling that China 21 was not going to be China 20, any more than it was China 19. By the 21st century, China is still officially communist, and Mao is still revered, but it’s clear a lot of this is just lip service. Also, the increasingly urbanized population has not been culled by the usual population-bomb-related famines. Sargent’s China hasn’t changed as much as the actual one has, but at least she does not think it’s a

(…) vast, ancient (society that) withstood the centuries by keeping down innovation, so life was much the same from one millennium to the next. Centuries slid by with little to mark them (…)

Knowing China is not a stagnant monolith should not be unusual enough to warrant praise, but (alas) is.

As to the clones themselves …

Sargent mentions twins early on. She also mentions, although not by name and with some details garbled, the Dionne quintuplets. Her real-world models shape her novel; the clones are genetically identical but they are not duplicates of each other. Nor do they develop telepathy or other absurd powers merely because they were conceived in an unusual fashion. They’re just people whose curious birth made them celebrities. Again, this shouldn’t be usual enough to be worth mentioning, but SF sets a very low bar here.

Because her world is a rational one and the protagonists are for the most part sensible people (with the exception of James Swenson, whom I guarantee readers will spend a lot of time wanting to slap so hard that his grandchildren will be born bruised), this isn’t a very dramatic novel. There are calamities and tragedies but they are all human-scale events of the sort everyone has to face.

1: It’s thematically appropriate that tucked inside my copy of Cloned Lives I found this relic. 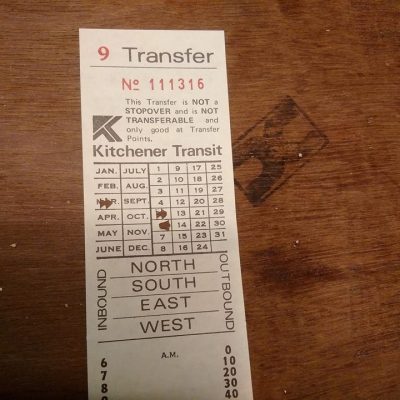 Kitchener Transit became Grand River Transit. They also realized that if they made public transit more convenient to use, people would be more likely to use it. That seems obvious but there are cities that have never made that cognitive leap (or who see increased use of public transit as bad, because of the perceived demographics of the clientele.).