1972’s The Tar-Aiym Krang was the first in the seventeen to date1 volumes of the Pip & Flinx series, the first book in the more than thirty to date Humanx Commonwealth Universe volumes and as far as I can tell, the very first book Alan Dean Foster ever wrote. That is a lot of firsts for one little book. How does it stand up forty-four years later?

Purchased on a whim by Mother Mastiff, Flinx is, by age sixteen, a talented thief and an experienced street performer. He has no idea that one seemingly minor encounter is going to catapult him from the only home he has ever known into a life of interstellar adventure.

Flinx is far too sensible to intervene in a simple alley mugging, but the same cannot be said of his pet Pip. Pip is an incredibly deadly Alaspinian Miniature Dragon. A few minutes later, the two attackers are dead, but not in time to save the muggee. All Flinx can do for the poor man is to go through his pockets, where the belated rescuer finds some loose change and an enigmatic star map.

Bran Tse-Mallory and Truzenzuzex, the very beings to whom the dead man was supposed to deliver the map, hire Flinx as a guide. They do not take long to connect the dots. Flinx has the map, therefore a kindly fate has sent him. The pair recruit Flinx for a bold expedition into the heart of the interstellar Blight, there to seek out the last great work of an extinct race, the Tar-Aiym2. The fabled Krang! Which may be a musical instrument or a weapon of profound potential. Or both. There’s really no way to tell without turning it on.

But others also seek the Krang, people who will not hesitate to kill to take what they feel should be theirs.…

My hat is off to Foster for his willingness to lampshade the unlikely coincidence upon which his plot turns. Fate! Or the hand of the author! From the protagonist’s point of view, hard to tell apart.

The cover you see is from the edition I actually own, but the first cover is worth your notice 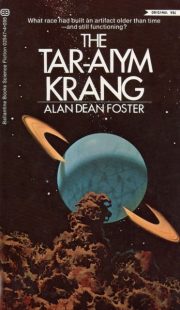 —if only because cover artist Dean Ellis went to the trouble of trying to depict the broken rings (the wings that give the planet its name) of the planet Moth. Now, this is NOT plausible physics. Probably. Nonetheless, the fourteen-year-old James spent a lot of time wondering if there were any way to make sense of those broken rings. Wouldn’t simple orbital mechanics have forced the wings to collapse into moons or spread out into full rings? Ah, the simple childlike faith that tries to make scientific sense of space opera!

But now I wonder if there were any unmentioned shepherd moons …

Perhaps because this was his first novel, Foster was not at all shy about stopping the narrative in its tracks with infodumps (Foster seems quite pleased with his own ingenuity) and flashbacks (which were obtrusive, but made me wish for a Bran Tse-Mallory and Truzenzuzex series). One of the flashbacks (the doleful tale of the time that the Commonwealth, who are totally great people BTW, had to commit justifiable genocide) would have been better omitted. But hey, in SF you have to expect the occasional mass murder. Or rape. Or both, because you can use the other side doing the second to justify doing the first.

Speaking of plot elements I could have well spared, the whole rivalry-for-the-heart-of-the-wealthy-trader-Malaika subplot did not work that well for me. (Pilot? Hired companion? Who will win?) Nor was I keen on the malevolent, elderly rich woman and her idiot niece who star as the main antagonists. As I recall, many of the female characters in the Alan Dean Foster books of this era were often … I will go with unfortunate.

Foster seems to have been riffing on some venerable SF, for the book as a whole has a rather archaic feel. It’s more like something from the 1950s than it is like the standard product of the swinging 1970s. Which is not surprising, given that ADF has always been upfront about his admiration for vintage authors like Eric Frank Russell. There’s also a more contemporary borrowed riff: the Aan, the warlike aliens who dog the heels of the expedition, remind me of Star Trek Klingons. That might be related to the fact that ADF wrote ten book-length collections of stories adapted from the animated Star Trek TV series of the 1970s. I also got unexpected hints of Poul Anderson influence from Foster’s attempts to flesh out the world of Moth. as well as from the resemblances between Anderson’s interstellar trader Nicholas van Rijn and Foster’s Malaika.

This is an utterly pulpy confection, but it was appealing enough (perhaps in a cheap candy way) to get young me to start buying ADF novels and to continue doing so for some time.

North Americans can buy The Tar-Aiym Krang andother ADF books here, while the British can buy them here.

1: First by publication order, second by internal order. I am not OCD, but if I were to fail to clarify that point, I would probably break out in hives.

The most recent book in the series, Flinx Transcendent, does seem to be the final book, but the author could easily write another book. He might decide to do what Poul Anderson did for Flandry, what John D. MacDonald did for McGee, and what Gregory McDonald did for Fletch, and give Flinx a kid.

2: The Tar-Aiym are extinct because they unleashed an extraordinarily lethal plague upon their bitter enemies. This plague also wiped out every race too slow in enforcing quarantine AND the Tar-Aiym themselves. Mistakes were made.