Before I delve into H. Beam Piper’s 1965 alternate history novel Lord Kalvan of Otherwhen, I would like to thank John F. Carr and his biography of Piper for providing a context for the novel. Context (for me at least) transformed what I once read as a somewhat problematic but engaging power fantasy into something much more tragic.

One moment, Pennsylvania cop Calvin Morrison was poised to arrest a fugitive. The next moment he was in a weird, high-tech vehicle, whose pilot seems very upset to see Calvin, judging by the pilot’s response: he tries to shoot Calvin with a ray gun. Moments after that unsettling confrontation, Calvin finds himself alone in a virgin-growth forest.

It does not take long for Calvin to suspect that he has moved in time rather than space: he recognizes the contours of the land as the familiar hills he knows from his own Pennsylvania. He at first believes that he might have been shifted to a time before the coming of the white men. Then he happens upon an isolated steading inhabited by whites; Calvin begins to suspect that he has been sent to a distant future in which humanity is still crawling out of some post-Atomigeddon dark age.

Twelve thousand years ago, a civilization teetering on the edge of collapse found salvation in inter-dimensional travel. Their world may have been stripped of its resources, but there are a myriad of worlds across Paratime that have not been plundered — yet. For twelve thousand years, the worlds of Paratime have unknowingly supported a hidden empire that spans an enormous Possibility. None of these worlds know that they serve the Home Line; that is the Paratime Secret.

The world in which Calvin finds himself is one of a sheaf of worlds known as the Aryan Transpacific. It is a smear of possibilities in which the Aryan peoples migrated east instead of west, expanding across the Bering Straits into the Americas. North America is divided into many small principalities. In theory, they owe fealty to the Great King. In reality, true power belongs to the priests of Styphon, because only the priests of Styphon know how to make gunpowder.

Styphon’s monopoly is bad news for the tiny realm of Hostigos. The priests have demanded Hostigos’ sulfur springs; Hostigos has refused. As punishment, the recalcitrant state has been shut off from all sources of gunpowder. Which puts them at an extreme disadvantage when the neighboring realms, urged by Styphon, mobilize to invade.

Calvin isn’t just a cop. He’s a former soldier and something of a military historian. Knowing how to make gunpowder is just one of the gifts he can offer his Hostigosian hosts. Before Calvin arrived, Hostigos was doomed. Backed by Calvin and his knowledge, it is possible that Hostigos could not just survive, but conquer. Shame that Princess Rylla’s first reaction on meeting Calvin was to put a bullet in his chest.

Gunpowder-propelled meet-cutes are not Calvin’s worst problem. Paratime cop Verkan Vall’s first duty is to protect the Paratime Secret. Even cursory investigation makes it clear that Calvin is a bright, resourceful man, and, even worse, Calvin’s native Europo-American, Hispano-Colombian Subsector is advanced enough to have conceived of (if not mastered) time travel . Calvin has all the information he needs to uncover the Secret. And that means Calvin must die.

I’ve used Whelan’s eye-catching cover art for the review. It was a hard choice between that and the original Gaughan cover. 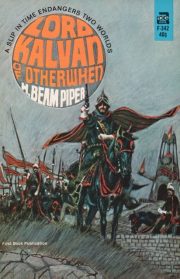 In the end, I went with the cover on the edition I own.


My editor points out the following:

It struck me that this book is another variation on What these people need is a honky . Even though all the characters are white, the savior protagonist comes from a more technologically advanced culture.
Lots of stories in this vein. Connecticut Yankee in King Arthur’s Court. The Man Who Would Be King. 1632. S. M. Stirling Nantucket series. Not to mention the many years of UK fiction about the white man who passes himself off as a native thanks to his many talents, then beats the natives at their own game. –K

Rather unusually for his period, Piper’s Federation stories often featured pretty diverse casts. There’s no sign of that here. When the Aryans invaded the New World, they exterminated the Amerinds down to the last papoose, so the cast is whiter than the extras on Friends. In fact, Piper seems to be playing pretty strongly to USian readers’ cultural expectations 1:

Sino-Hindic — that wasn’t a civilization; it was a bad case of cultural paralysis. And so was Indo-Turanian — about where Europo-American had been ten centuries ago.

Mind you, the man thinking the above comes from a civilization that has been secretly sponging off the other worlds of the Paratime for the last twelve thousand years.

Many authors depict battles from an omniscient perspective, the gamer’s grand view of the board and all its pieces [2]. Lord Kalvan, which draws on historical battles for inspiration, takes a different approach. Once the battle begins, the only reliable information is what the soldiers can see; confusion is the rule of the day. This is particularly true of an extended sequence in which two armies face off in the middle of a dense fog bank.

Having read Carr’s biography of Piper, something that kind of jumped out at me is that Calvin and Piper are alike in many ways: interested in the same things, equally out of step with their cultures [3]. Calvin is portrayed as a man born into the wrong time and place, a man whose interests are out of fashion, a soldier with the misfortune to live in a period where mechanized warfare and nuclear weapons render personal glory on the battlefield out of the question. As one Paratimer puts it:

the man is a genius, and the fact that he was only able to become a minor police officer on his own time-line shows how these low-order cultures allow genius to go to waste.

Calvin and Piper share the same allegedly low-order culture. I wonder if the plot isn’t a extended Mary Sue on Piper’s part, a dream about what might happen if he were to be snatched away from his own timeline and dropped into a history fit for heroes, a world in which he could innovate and massacre his way to happiness. Trapped in mundane Pennsylvania and the dismal reality of his life, Piper shot himself in November 1965.

A lot of Piper’s fiction fell into the public domain and is available for free on Gutenberg. Lord Kalvan of Otherwhen is not one of those. Someone, somewhere, still has the copyright. Lord Kalvan of Otherwhen is available from Kindle. So is a rather bewildering assortment of sequels by various combinations of John F. Carr, Roland Green, and Wolfgang Diehr: Great Kings War, Kalvan Kingmaker, Siege of Tarr-Hostigos, The Fireseed Wars, Gunpower God, and The Hos-Blethan Affair.

1: Including one recurring Piper trope, which is that while he isn’t at all keen on slavery, he is just as cool towards slaves, who will only respond to being freed with ingratitude and complaint.

2: Some games have rules that simulate the fog of war. I have to confess I have no idea if Fantasy Games Unlimited’s disco-era Down, Styphon was one of those. Sorry, is one of those. FGU still offers it for sale.

3: Both devoted to their mothers, a plot point that escaped me the other times I read this.