Dragged back to utopian four-BEE following the death of her pet and her unborn child, the nameless narrator chafes against a society which, they now realize, is much too limited. Life in four-BEE is pleasant and utterly meaningless; the narrator and other adolescents, the Jangs, are expected to do nothing but enjoy themselves … but even the adults (known only as older persons ) play no really useful roles. Any job worth doing is done by robots and quasi-robots because they can be trusted to do important jobs correctly.

Even rebellion is meaningless in four-BEE. The quasi-robots who keep the city running simply fix any damage with a long suffering sigh. Or so everyone thought. And then … one of the Jangs, Zirk, outraged over a comparatively trivial disagreement, challenges the narrator to a duel. The duel leads to an interesting discovery. There is a crime the quasi-robot-run Committee will not forgive:

Death is but a temporary inconvenience in four-BEE — suicide is a way of life for many of the bored inhabitants — but a human deliberately causing the death of another human is something that has not happened for sixty centuries 2. The Committee offers the protagonist two options: Personality Dissolution or exile in the world-desert, where the narrator will eventually die of natural causes 3.

The Committee would prefer it if the protagonist had the good taste to give up in despair as quickly as possible. However, they are constrained by their programming to accede to demands for a sand-ship and enough equipment to stock a small community. The narrator plans to create a tiny oasis of life in the vast wastes.

The Committee’s worst fears are realized when four-BEE’s adolescents, the Jang, begin to flock to the artificial oasis. Punishing the Jang with exile does nothing to stem the tide. Bored sybarites are not the best material from which to forge a new society; nevertheless the Committee cannot tolerate any alternative.

And the Committee has a plan.

The whole business about the narrator being nameless isn’t nearly as intrusive in the novel as it is in this review, because the book is written from the narrator’s point of view.

I have not read this in something like twenty years 4; forgotten details kept jumping out at me.

For example, I had completely forgotten about the whole ​“lazy idiots show up at the commune” angle, which I found completely believable. Long-time readers will remember that my family had the misfortune to rent the farm to tenants who set up a commune. The commune attracted numerous people who wanted food and shelter, but were unclear on the helping out aspect of communal living. Or they insisted on helping in ways that were counter-productive, like using a chainsaw inside the house.

This time around I noticed, or remembered, that Lee does not call people who have matured past the Jang stage ​“adults.” They are ​“older people.” I believe that this is a very deliberate choice on Lee’s part: humans grow older in four-BEE. but none of them are ever allowed to become adults, because that would make the Committee’s job that much harder.

In contrast to robots like R. Daneel and Jenkins, whose malice towards humans is concealed under charming servility, the quasi-robots are often fairly open about their loathing for the humans and gleeful about evading the purposes behind their programming. Their basic programming forces the quasi-robots to protect and serve. They are not free to abandon their charges — but they do have some choice about how they serve them. I suspect that this supposed utopia is empty and unsatisfying because the quasi-robots have chosen to fulfill the letter of their programming while betraying the intentions of the original human programmers.

But there is an alternative to endless ennui in four-BEE:

“Here I am!” shouted the desert, loud with life, for there was still life in it, waiting, stored like seed. ​“Here I am. Did you forget me? Forget me despite your dreams of the sun and the rain and the antique tribes who roamed me one with their herds and their weird ways? You, who moaned and whined, covering metal-tape with cries and yearning, you, you effete thalldrap. Now’s your chance to prove you can do more than sit on your tail complaining and drinking sapphire wine with your tears of self-pity. Come, come and do battle with me, come and fight me. I’m more than a match for you. I’ll devour you if I can, but I’ll do it cleanly and openly, not with words and dark little tanks in Limbo. Don’t be afraid of human death and human age. I’ve see it all, and I know it. It’s just dust blown over the rocks. Look at me, how dead and old I seem, and yet, watch me grow, watch me live. Come on. Come and find me. I’m waiting.”

The people of four-BEE switch sexes as easily as we do hats. While that might lead to a society where socially mandated gender roles vanish, that is not the case here; male Jang posture and shout and female Jang are flamboyantly girly. Ah, well. I guess that’s one way to use the technology.

My paperback (a DAW first edition) is only 175 pages long. Even taking into account the teeny tiny fonts used back in the days of stagflation, this is a very short novel by modern standards. It is also a complete story. These two facts mean that Lee is forced to be very direct in her plotting. Yet this isn’t at all the simple little novel you might expect. It is one I would recommend.

Drinking Sapphire Wine is available in the omnibus Biting the Sun 5 from Random Penguins. 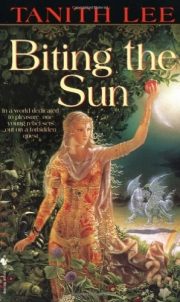 1: There was apparently supposed to be a third book in the series but at this juncture it seems likely the manuscript was either never finished or very thoroughly lost.

3: At which point their life spark will be subjected to Personality Dissolution and installed in a new body. You can check out of four-BEE, but you can never leave.

4: Possibly because Don Maitz’s cover for Drinking Sapphire Wine didn’t burn itself into my psyche the way Brian Froud’s cover for Don’t Bite the Sun did. 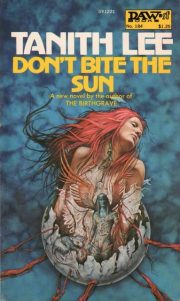