I have been listening to the old radio show X Minus One . Because her stories provided the basis of several episodes, Katherine MacLean (last seen here in my review of her Missing Man) has been on my mind. Hence this review. The Diploids and Other Flights of Fancy (or as it is called in my edition, 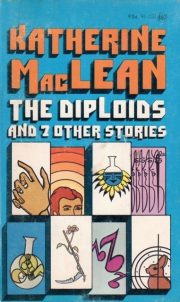 The Diploids and 7 Other Stories), collects a number of her works from the 1950s.

By purest coincidence, I recently encountered someone who had never read MacLean’s much-anthologized ​“The Snowball Effect.” [1] That does not make me want to read this collection more than I already do — but it does convince me that now is a good time to review this (sadly obscure) collection.

“Mart” Bredon has no idea why he is different from other people but the physical evidence (indefinable race, odd physical proportions, extra fingers, an eye on the back of his head) is undeniable. Yardley Devon claims he knows what Mart is: a diploid. But Devon is a homicidal maniac bent on murdering Mart for being a diploid and he may not be the most reliable source of information around.…

Not my favourite MacLean, so it’s a bit of a shame that at sixty-six pages it’s by far the longest work in this collection. That said, she avoids the standard twists that other authors of this time would have exploited: there is a perfectly reasonable (by which I mean fairly horrific in its implications) explanation for what Mart is … and it’s not that he’s a Martian, a mutant, or the last survivor of a previously unknown race of hominids.

Mart’s girlfriend (who becomes unfortunately fixated on the implications that Mart’s possible non-human status might have for any prospective kids) seems to think that most primate lineages produced something human-like. What an interesting world that would have been.…

Archaeologist Alexander Berent returns home to discover that in his absence, his wife Helen has embarked on a one-scientist program to eliminate old age forever. She informed him of her work in an increasingly alarming series of letters. Helen seems to have thought through the risks of the research well enough (or at least as well as she could and still go through with it). What she hasn’t done is consider the implications of success.

I am only two stories into the collection, but the theme I expect to find over and over, that researchers of this era have nothing resembling professional ethics, is already well established. Helen only experiments on herself, but at least one of her colleagues seems to view the terminally ill as his own professional playground. This is not surprising, as modern medical ethics only began to take shape in the 1970s. Which is roughly the time when the sort of people who were used as experimental subjects began to have political power.

Desperate to prove the value of the sociology department, a researcher uses a seemingly nonthreatening sewing circle to demonstrate that he can at will induce unlimited growth in any social organization. What could go wrong? It’s only a sewing circle!

Another story about the dangers of success! And also about how ethical guidelines are a good idea. Pity they won’t come along for another twenty years.

This was adapted for X Minus One and is one of the MacLeans that still gets collected from time to time [2]. If a young reader knows a MacLean, odds are it’s this story or perhaps ​“Pictures Don’t Lie.”


Engineers develop an unexpected and inexplicable rapport with their machinery.

I seem to prefer MacLean at shorter lengths, but I know that this story of man-machine interfaces was much appreciated in its day.

A generation after America conquered its external enemies, then turned on itself to exterminate everyone who smelled even faintly of nonconformity, one teacher tries to lead his classroom to freedom. Of course, all it takes is for one child to mention the curriculum to his parents for things to go very, very badly for the teacher.

One of the little incidents used to illustrate social conformity is that a crowd of kids turn on one of their number who has the temerity to wear his cap backwards. I wonder how many of the people who read this story approvingly sixty-odd years ago, certain they were not the sort of small-minded conformists pilloried in the story, have gone on to moan about kids wearing their caps backward?

A careless comment to a reporter leads to a researcher being branded an enemy of the state and starving in a prison cell. His only hope of salvaging anything from the situation depends on a young boy’s game.

Thank goodness we’ve moved past the time when the state could use the momentary appearance of disloyalty to crucify an inconvenient iconoclast.

First contact with aliens goes horribly wrong, as it becomes clear that the researchers interpreting the signals from an incoming alien spacecraft have made one assumption too many about the communications protocols of the visitors.

This was the very first MacLean I ever read! Let me work out where.… Probably in Invaders from Space (ed. Robert Silverberg). Although it is not impossible that I heard it before I read it, in its X Minus One adaptation.

If all of us have the potential to develop telepathy, why is it that no one ever does?

This belongs to a very specific group of stories about telepathy, but to say which one would be a huge spoiler.

These are very much the sort of stories one would expect from the fact than MacLean appeared often in the pages of Galaxy and Astounding (Incommunicado in particular reads very Astounding). MacLean is never less than competent and a respectable fraction of her stories are the sort someone like me might remember for the better part of half a century.

It turns out there’s an edition of The Diploids and Other Flights of Fancy I managed to overlook until I was posting this review: it is available from Wildside. 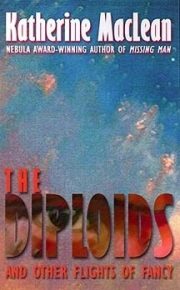 1: I would explain that this story was terra incognita ​“because it hasn’t been collected since Richard Nixon was President” … but that’s not true. Many of MacLean’s stories have been neglected, but not that particular one; it has been reprinted as recently as 2007. Reprints not from obscure publishers, either.

2: Some of you may quibble about whether 2007 counts as sufficiently contemporary for me to use ​“still”, given that it is almost decade ago and to you I say ​“La, la, la, I am not listening.”