Sand was the ninth episode in Blake’s 7’s fourth and to date final season. It was also the second and final Blake’s 7 episode written by Tanith Lee.

Five years before the start of this episode, an unlucky spacecraft crash-landed on the isolated world Virn. The crew survived long enough to send out a series of increasingly desperate distress calls to the Federation before succumbing to what the castaways thought was a local virus. Now that it is far too late, Commissioner Sleer and a small team have come to investigate Virn, which they believe may contain a mysterious substance of use to the Federation.

Did I say ​“Sleer?” The Commissioner may be using that name but anyone familiar with the series would know at a glance that ​“Sleer” is none other than long time series antagonist Servalan! Who is considerably less dead than her enemies believe!

To land on Virn is to crash on Virn. Servalan and her companions — pilot Chasco, vaguely menacing Inspector Reeve, and a fellow whose fate may be foreshadowed by the fact the script only calls him ​“Servalan’s assistant” — all survive the landing, perhaps because the Federation starship has seat belts and perhaps because .… something .… does not want the crew dead just yet.

The Blake’s 7 rebel crew, Avon and his team, have traded their ship Liberator for a new ship, Scorpio. Crewmember Cally has been replaced by Soolin. Curious about Sleer’s reason for visiting Virn, Scorpio has followed Sleer to Virn. The rebels have an advantage over their Federation foe: access to a teleporter. That means they do not crash land1 … however, they are not out of danger.

Their orbit turns out to be close enough to the planet that the malign force down on the ground can reach Scorpio. In fairly short order, Tarrant is trapped down on Virn with Servalan. While that uncomfortable team explores the exciting world of hate-flirting, Tarrant’s allies in orbit find themselves in a ship whose systems are quickly failing.

Unable to communicate with each other, the two teams will have to solve the mystery of Virn independently if they want to survive.

Every age and culture has its own impractical fashions. The Federation’s fetish requires ornate, functionless shoulder fins for the men, which are, IMHO, no more ludicrous than cod pieces or these little items from the 1970s. 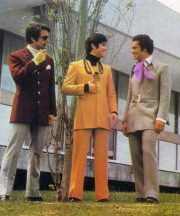 Servalan for her part opts for a slinky cocktail dress and high heels, an interesting choice of attire for exploring an alien world. As a result, some viewers may expect her to play distressed damsel. Well, Servalan is Servalan; regardless of clothing or behaviour, she will always be the last person standing.

The scenes set on Servalan’s ship go some way to explaining how it is that a team as dysfunctional as Avon’s can do so well against the Federation. Avon and company do not like each other, but they are at least loyal to each other. Avon may make snotty comments about Tarrant, but he is disinclined to abandon the fellow on Virn.

In contrast, the Federation does not understand team loyalty at all. Their approach is to make subordinates afraid of the consequences of failure. Reeve spends a lot of time threatening the pilot on whose skills Reeve’s life depends, and neither Reeve nor Servalan lift a hand to help her hapless assistant shift the incredibly awkward box of supplies he carts across Virn2.

Tarrant and Servalan’s partnership may seem unlikely; either one would be justified in simply gunning the other down when the opportunity presents itself3. As it turns out, there are two in-story reasons for them to cooperate. Not only are neither one of them in their right mind, their temporary immunity to the local menace requires both of them to be alive.

Being unable to talk to their true enemy, both Tarrant and Avon convince themselves that the alien will spare them because they think the alien wants to create a convenient herd of humans on which to feed. As dominant males, Tarrant and Avon are clearly good breeding stock, whereas poor Vila isn’t. Now, the alien isn’t in a position to confirm or deny this hypothesis, but I do wonder how people familiar with cattle-breeding feel about this theory. For my part, I think the alien just wanted Vila out of the way because his thieving skills potentially make him the biggest threat: breaking into places is topologically similar to breaking out.…

Like Sarcophagus, the moral of this episode is ​“curiosity is highly overrated.” This is a rather gloomy universe dominated by authoritarian governments and littered with evil relics and subtle monsters. It’s best not to poke your nose into too many holes.…

Blake’s 7 can be purchased here.

1: Which is good because the Scorpio does not seem to have seat belts.

2: Which gets abandoned around the time we find out why the script didn’t bother to name the poor guy. Presumably, the box did not even contain vital supplies. Perhaps it was just an awkwardly shaped box Servalan made the guy cart around to underline that she is the boss.

3: While Tarrant has the only working pistol in a number of the scenes he shares with Servalan, Servalan is Servalan. Having the only pistol is less of an advantage than he thinks.