Yes, this book should have been featured in my final Norton review. It’s not, because someone (and I am not naming names here) didn’t read the Waterloo Public Library entries for Dragon Magic and Exiles of the Stars carefully enough. That person overlooked the little McC notation indicating that the books were to be found at the McCormick branch (which is effectively inaccessible to me). It will take long enough to transfer the books to the central branch that waiting means missing the deadline for today’s review. And I prefer not to miss deadlines.

1973’s Forerunner Foray is third in the Forerunner series. It’s also the first one in which the Forerunners play a significant role, three books and thirteen years into the series.

Ziantha’s promising psychic powers have caught the attention of Yasa and Ogan, two ambitious members of the Thieves Guild, and earned her a ticket out of the Dipple. It’s true that she is more of a valued possession than a valued employee, but even that is better than a life spent in the Dipple. It’s not like Yasa and Ogan don’t take care of her; not only have they honed Ziantha’s psychic powers, but they have trained her as a thief and a master of disguise.

All she has to do is follow orders to the letter, never screw up, and never step out of line and she will be secure until the moment she has outlived her usefulness.

In the opening chapter, Ziantha screws up by exceeding her instructions. She has been told to break into the home of a certain Jucundus. While there, she is strangely attracted to seemingly valueless curio. She cannot forget the curio and while brooding over it, discovers a new psychic power. She teleports the curio to her location. While she gains the curio, she also alerts the Patrol’s mentalists to the fact that there is a powerful unregistered psychic somewhere on Korwar. Oh yes, and she succeeds in alerting her master and mistress that she has stepped out of line.

Luckily for Ziantha, her powers and her connection to the odd but psychically powerful curio make her too valuable to punish in the traditional Guild manner. Instead of being mindwiped into imbecilic servility, she is put into cold sleep and sent off to serve her masters on the little known world from which the curio came.

Even from orbit it is easy to see that the world has suffered a burn off. The continents are scorched and the oceans have been reduced to half their former extent. Whether the cause was war or natural disaster, none can say. Of the previous inhabitants there is little sign, save for a few archaeological traces. Ziantha’s ESP allows her to sense what others cannot see. She leads an expedition to the vanished city of Singakok and thence to the Tomb of Turan.

And to the Eye, a stone of power that will cast Ziantha’s mind far back into a past when this world was healthy, into a body of a woman who is doomed to be buried alive.…

If you are taphophobic, you may not want to read this book. Details like being lost in mazes, in the dark, or simply sealed into a room come up often enough in Norton I wonder if it indicates something about the author’s own quirks.

This book begins with a very sincere note asserting that parapsychology and psychometry are totally things that are real, and the author knows this because she has seen them in action. Norton also approvingly cites the work of T. C. Lethbridge, known to me only from Norton’s note.His Wikipedia entry may be found here. He seems to have been an energetic non-conformist of a certain type.

The connection the first book in the series (Storm Over Warlock), the second (Ordeal in Otherwhere), and this one is that Lantree, a major supporting character in this book (I forgot to mention him before now; just deal, OK?) is the son of Shan (the protagonist from the first book) and Charis (the protagonist from the second book). I am going to take a wild stab in the dark here and speculate that the series was not called the Forerunner series until this volume appeared.

[added later. Or maybe ​“Forerunner” just an ISFDB-specific name for this series. Either way, I am going back and rename the series the Warlock series. Although this particular one isn’t actually set on Warlock]

I see that I have been operating under a misapprehension, which is that I thought Forerunner referred to a specific extinct culture. It’s actually the catch-all term for any vanished civilization in the galaxy. There is no guarantee that the Forerunners of one world are related to Forerunners on another. Based solely on fragmented remains, it would be hard to tell if they were.

The Dipple really is plot gold: almost anyone could end up stuck in this vast slum. It is unpleasant enough that its inhabitants will do almost anything to escape. It’s no wonder that Norton kept returning to Korwar and its Dipple.

I note with approval that cover artist Charles Mikolaycak actually read the novel for which he provided the cover. The woman, the stone, the man with the migraine, and the octo-toucan all correspond to important elements of the book.

When I was reading this, I was reminded somewhat of the James H. Schmitz protagonist Telzey Amberdon, another powerful psychic who also found herself on the wrong side of the law and up to her eyeballs in alligators1. However, there is a fundamental difference between the two, a difference that makes Ziantha more interesting to me than Telzey. Both women have a tendency to manifest new powers, but when Telzey does, it solves the problem at hand. When Ziantha discovers a new ability, it generally transforms a difficult situation into one that is much worse2. Not fun for Ziantha, but very entertaining for the reader.

1: I had pictured both heroines as gingers, but if this cover by Frank Kelly Freas is to be believed, 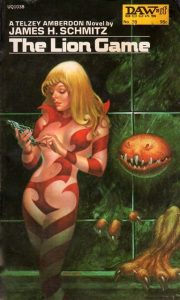 I must be thinking of another Schmitz character, Trigger Argee. And the tendency of SF authors to ascribe to red-heads supernatural powers, although never ones that include a marked resistance to UV. Which, if I was a pale-skinned red-head, would be the first power I would work on acquiring.

2: Another difference is that all of Ziantha’s powers have to do with moving something — usually information, sometimes matter — through space-time, while Telzey’s all have to do with whatever’s necessary to get her out of this week’s jam: telepathy, cloning, the ability to survive being baked in an enormous bran muffin.