I will probably review all of my H. Beam Piper novels (or at least the SF ones) eventually. I have a specific reason for reviewing 1962’s Space Viking this week. A reason I will not explain until Friday. Foreshadowing! The mark of quality literature!

Speaking of foreshadowing, when Lady Elaine warns her husband-to-be Lucas, Lord Trask, Baron of Traskon that

“It’s bad luck to be called by your married name before the wedding.”

Trask should have listened. For that matter, every aristocrat on the planet Gram should have noticed just how crazy Lord Andray Dunnan was, and what a bad idea it was to allow Dunnan to assemble his own private army. Elaine and Trask in particular have good reason to be worried: through no fault of her own, Elaine plays a central role in Dunnan’s rich fantasy life. But … Dunnan is the nephew of Duke Angus, who is poised to make himself king of all Gram. Dunnan is too well-connected to be shot out of hand, so everyone tacitly tolerates his obvious craziness.

Then everything goes pear-shaped. Dunnan’s men hijack the starship Enterprise; in retrospect, the purpose for which Dunnan recruited all those mercenaries. Dunnan tries to assassinate Elaine (for rejecting him) and Trask (for winning her) before fleeing in the Enterprise. Dunnan’s mistake is to kill Elaine, but only wound Trask. While the aristocracy of Gram may not be inclined to pursue their vendetta into space, nothing will stop Trask from chasing Dunnan to the ends of the galaxy.

Chasing is easy enough. Actually finding Dunnan, on the other hand.…

The human worlds in the year 1716 Post Atomic (3659 CE) are mired in a dark age. The Interstellar Wars brought down the Federation centuries ago. Only a handful of planets cling to civilization; the rest have fallen into pre-atomic barbarism or worse. Among the civilized worlds are the Sword Worlds, of which Gram is one. The Sword Worlds were settled by refugees from the System States War, refugees who had no reason to love the Federation. After the Federation collapsed, they sent raiding ships into the ruins of the empire — many ships, many raiders, avid for loot and pillage.

The Sword Worlds had managed to retain the infrastructure for building mighty ships of thermonuclear vengeance, ships like Trask’s Nemesis, twin to the stolen Enterprise, Also for staffing the ships with trained technicians. However, lacking any central authority or reliable means of communication, each raid was also a voyage of exploration. What the Sword Worlds hear of other worlds is more rumour than news. The hunt for Dunnan will be difficult.

The Old Federation, where you’re going to hunt Dunnan, occupies a space-volume of two hundred billion cubic light-years. And you’re hunting for one ship and one man in that. How are you going to do it, Lord Trask?”

​“I haven’t started thinking about how; all I know is that I have to do it. There are planets in the Old Federation where Space Vikings come and go; raid-and-trade bases, like the one Duke Angus planned to establish on Tanith. At one or another of them, I’ll pick up word of Dunnan, sooner or later.”

​“We’ll hear where he was a year ago, and by the time we get there, he’ll be gone for a year and a half to two years. We’ve been raiding the Old Federation for over three hundred years, Lord Trask. At present, I’d say there are at least two hundred Space Viking ships in operation. Why haven’t we raided it bare long ago? Well, that’s the answer: distance and voyage-time. You know, Dunnan could die of old age — which is not a usual cause of death among Space Vikings — before you caught up with him. And your youngest ship’s-boy could die of old age before he found out about it.”

Trask decides that the only viable strategy is to turn Space Viking himself. He will raid the Old Federation, and collect vast heaps of loot at his base (the newly conquered world of Tanith). Dunnan will be unable to resist the temptation to strike at his old rival. Trask will turn his base into bait.

It turns out that murdering people for their stuff has downsides that Trask never expected. And … while Trask’s plan is successful as far as it goes, he cannot begin to imagine the warped plan that his enemy will concoct for the eventual attack on Tanith.

I know exactly where I first bought this book: Sears. The Sears book section, when it still existed, way back in the olden, golden days of yore, was actually fairly well-stocked. For this reread, I downloaded the free epub from Gutenberg (I like to be able to adjust the font size). The cover that caught my eye was this Whelan piece from 1977 MMPK: 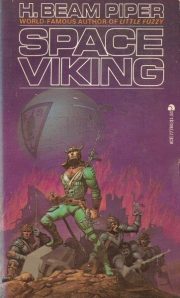 Grim! And also manly! Although significantly less head-explody than the Whelan cover for The Cosmic Computer 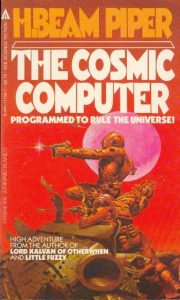 On an earlier reread, a couple of decades ago, I noticed a few details that the teen me had missed. Trask sure managed to kill an impressive number of total innocents in the course of his vendetta. Trask’s methods of persuasion included knives, guns, atom bombs, hydrogen bombs, and the ever popular hellburners, which are basically H‑bombs that burn for hours:

There had been two hellburners; the cities on which they had fallen were still-smoking pits literally burned into the ground and the bedrock below, at the center of five hundred mile radii of slag and lava and scorched earth and burned forests.

And if that’s not enough, there are also planetbusters.

It’s really hard to use something that sets fire to everything within five hundred miles in a discriminating way. Of course, none of the Space Vikings are even trying to be discriminating. While Trask does execute any of his men who commit crimes like rape, he’s also OK with setting fire to entire nations.

At least Trask doesn’t kid himself about what he’s doing or pretend that the majority of the people he is doing it to deserve it (or even that he is not destroying vastly more wealth than he carries off). As the book progresses, it gradually dawns on him there are better uses for his time and energies. Still, I am actually a little baffled that the younger me focused on the awesome space battles and not on the millions of people Trask and his pals were killing.

Andray Dunnan, the lunatic whose crimes drives the plot, is an interesting figure. He is a paranoid who believes the only reason he has not enjoyed the accolades he feels he deserves is because there is a vast conspiracy against him. He does not hesitate to lash out at the people he imagines wronged him. Why, he is the kind of person who would dishonorably exploit bugs in electoral systems to get the results he wanted! For some reason, this sort of character seems oddly familiar …

Another detail I didn’t notice until I read The Cosmic Computer and Space Viking back to back is that, unlike the other Piper novels I have read, women are allowed very little agency and constrained to very few roles. This is such a deviation from Piper’s usual pattern that I suspect that it’s there as a commentary on Sword World culture. The Sword Worlders see themselves as civilized; I don’t think Piper does.

The Cosmic Computer and Space Viking together form Piper’s analog to Asimov’s Foundation books. Whereas Asimov (at least in the original books) sees dark ages as momentary lapses, Piper seems to be see the high moments of civilization as exceptions and ages of chaos and war as the rule. Nothing lasts; there’s always some doom inherent in any high culture. To quote from the text:

Workers and peasants who revolted to seize and divide the wealth and then found they’d smashed the means of production and killed off all the technical brains.

The good men all left to colonize, and the stuffed shirts and yes-men and herd-followers and safety-firsters stayed on Terra and tried to govern the galaxy.”

The best Sword-World genes are literally escaping to space, like the atmosphere of a low-gravity planet, each generation begotten by fathers slightly inferior to the last.

​“It takes an awful lot of people, working together at an awful lot of jobs, to keep a civilization running. Smash the installations and kill the top technicians and scientists, and the masses don’t know how to rebuild and go back to stone hatchets. Kill off enough of the masses and even if the planet and the know-how is left, there’s nobody to do the work. I’ve seen planets that decivilized both ways. Tanith, I think, is one of the latter.”

And there’s the story that plays out on Marduk, a world with whose fate Trask becomes entangled. There, the elite refuse to crush the unruly mob out of a misguided belief that

the people are the Government

No good will come of that! But in Marduk’s defense, no long-term good seems to come out of anything. Even local economic development turns out to be dangerous, because it reduces the need for interstellar trade (another issue that killed the Federation) and because it attracts trained personnel from worlds that apparently cannot replace them [1].

The only happy endings in this are short term and personal; in the long run everything is doomed. It may not be entirely coincidental that this was published only two years before Piper shot himself. Exciting as this book’s the space battles are, the worldview is extremely bleak.

Space Viking lapsed into the public domain and is available on Project Gutenberg. The Gutenberg edition does not have the Whelan cover art, but to make up for that, features art by Schoenherr.

One of the delightful things about reviewing old books is discovering new things about them. In this case, I discovered that there is a wealth of sequels to Space Viking, two by Piper biographer John Carr and Mike Robertson: 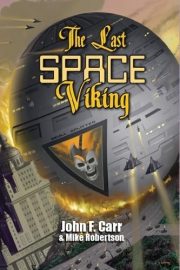 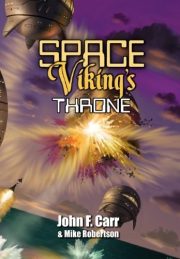 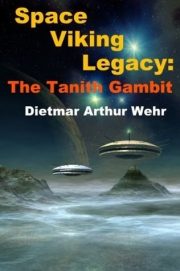 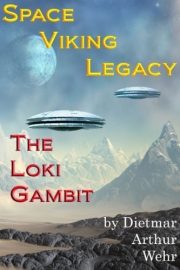 The Carr and Robertson are available here. No idea where the Wehr can be found (or even if they are available). I have not read any of these and have no opinion on them.

1: In the case of the Sword Worlds, this may be because the Sword Worlds wouldn’t have anything like a mass education system. That would be difficult, given their feudal culture.