The modern reader’s perception of Jim Baen may be coloured by the sad decline of the company that bears his name into a hollow shell of its former self, a shell catering to nostalgic ideologues. This perception is more than a little unfair to the late Jim Baen, who probably would have gotten a Best Editor Hugo when he was alive if only his fans had not so lamentably lazy [1]. Baen’s editorial tastes, particularly when he was younger, were much broader than a modern reader might suppose [2].

For example, if one were to ask modern readers ​“which right-wing editor of the 1970s, known for publishing such pro-nuclear power authors as Jerry Pournelle and Petr Beckmann, also published an occult science fiction novel about romantic triangles, reincarnation, and redemption, against a backdrop focused on the dangers of nuclear power?” I bet that very few (if any) of them would suggest Jim Baen.

And yet, I hold in my hand a copy of Arsen Darnay’s 1978 novel Karma [3] (published in hardcover by St. Martins, under an arrangement with Baen’s Ace). It is all about romantic triangles, reincarnation, redemption, and, of course, the dangers of nuclear power.

1974: Watergate may have rid the US of the paranoid Quaker but only atomic power can end the on-going energy crisis! Or it could if anyone could figure out how to safely store nuclear waste for a quarter of a million years. John D. Clark (Jack to his friends) figures that he has the solution: the New Mexico Plan. This consists of a vast facility to be built out west, on the edge of the Shashtuk Indian reservation [4], where there are ​“no people to speak of.” Jack is intensely frustrated to find that there are great many political deals to be sealed before he can build the glorious nuclear waste facility that he envisions.

Jack is also frustrated by his inexplicable, hopeless obsession with fellow apparatchik Evelyn Bantry, a limousine liberal who represents everything working class Jack abhors. Evelyn makes no secret of her loathing for Jack and her resentment of his dogged stalking. She only agrees to date him, once, in the hope he will finally leave her alone.

The third member of the romantic triangle I promised you is the technical visionary Theodore J. Aspic III, an old friend of Evelyn’s. Aspic believes he has, if not the solution to the nuclear waste problem, then a solution. He wants to found a priesthood who will guard the waste for a period of time longer than anatomically modern humans have existed. Jack isn’t impressed by the solution and he’s also not pleased by the fact that Aspic and Evelyn clearly make a happier couple than Jack and Evelyn ever could (although ​“happier than Jack and Evelyn” still equals ​“miserable”).

Thanks to an experiment with past life regression that went horribly wrong, Aspic realizes that this fraught romantic triangle is just the latest development in a dysfunctional dance that has been ongoing for millennia, through incarnation after incarnation. Jack, Evelyn, and Aspic are drawn together, again and again, by the legacy of past mistakes. In their immediately previous incarnations, Jack was a concentration camp guard and Aspic and Evelyn were his victims. Jack spends the rest of his life as Jack working off the karmic debt he owes for those sins. Aspic, on the other hand, has remembered enough of the previous incarnation to make him dangerous; he is now poised to add to his karmic burden.

Evelyn is, as always, the prize they fight over. Like the future, Women’s Lib is unevenly distributed.

Aspic’s familiarity with the workings of reincarnation provides him with a solution to the problem of keeping the atomic priesthood going for a quarter million years; this solution, conveniently enough, is also a way to get back at Jack. Reincarnation implies souls. While souls are hard to detect, it is possible that science is now sufficiently advanced that both detection and manipulation are possible. It takes Aspic decades but in the end he learns how to control reincarnation. He can compel people to be reborn as servants to nuclear waste and he can doom his enemy Jack to a hell of Aspic’s creation.

While Aspic was doing his mad scientist thing, the US remained mired in energy woes. Atomic power turned out to be a mirage, but nothing better ever came along. This set the stage for a visionary like Stanley Morgan, a bold president who promised to deal with all of America’s enemies, internal and external, a man who would utterly change the USA and the world around it.

More than a century after the Holocaustic War, Jack finally escapes the trap Aspic laid for him. He is reborn into a world that is poorer, more ignorant, and a lot less populous than the America Jack knew. An encounter with Evelyn, now a rather unhappy giant telepathic mutant rabbit, awakens Jack’s memories of his past life. Can Jack resist the temptation to continue the cycles of obsession, abuse, and revenge? Is redemption even possible?

People familiar with Darnay’s Disco-era oeuvre will know that most of his works fit into one grand timeline, which runs from Karma to A Hostage for Hinterland to The Siege of Faltara. Short works like ​“Salty’s Sweep” and ​“The Tank and Its Wife” tending to fall towards the Karma end of the timeline. The main exception was a 1981 novel, The Purgatory Zone, which did not belong to the same sequence as the works listed.

I couldn’t say how long it has been since I last read this book. The bookmark I found 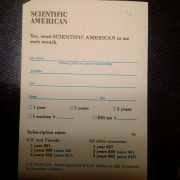 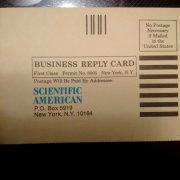 doesn’t provide enough clues that I can work out when I might have slipped it into my copy of Karma. Long enough ago that I had forgotten everything about the book beyond ​“it’s the one about nuclear power and reincarnation.” While I remembered that there were giant telepathic mutant rabbits, I forgot Evelyn was reincarnated as one.

The subplot about Jack’s extraordinarily dysfunctional relationship with giant telepathic mutant rabbit Evelyn was an exceedingly unpleasant rediscovery. It’s subplots like that one that give sadomasochistic bestiality a bad name (though in all fairness, I should observe that the relationship is not portrayed as a healthy development for anyone involved).

Jack does eventually fumble his way towards wondering if he has been dealing fairly by Evelyn, I cannot help but think the fact that he starts to have qualms only after tormenting and exploiting her shows something of a blind spot on Jack’s part. (He keeps her in a cage to use as a mental projector; she only escapes this wretched incarnation courtesy of a nuclear explosion orchestrated by … Jack.)

Women, or at least the ones central to the plot, aren’t treated all that well in this book; Evelyn is a prize and Jack’s wife Betty (whose lives he has blighted by marrying her over and over again) is poorly developed. Scout JoAnn the Ursula, someone with whom Jack is smitten in his post-Holocaustic War incarnation, does seem to be an exception to the general pattern, but circumstances separate her and Jack fairly quickly. Jack could benefit from some future incarnations that might teach useful lessons such as ​“not treating women like objects.” Or better yet, one might wish that Evelyn and Betty figure out how to escape their entanglement with Jack and Aspic.

The fact that it takes Aspic nearly twenty years to go from ​“if the soul exists and interacts with physical bodies, then there must be some coupling mechanism I can exploit to manipulate the soul” to learning how to realize that in (some impressively durable) electronics goes against a grand and venerable SF tradition. We have learned to expect that the interval between inspiration and realization is the length of time it takes to carry the tablecloth on which one doodled out the original idea to the nearest machine shop. If I track down my copy of Pournelle’s Mercenary, I plan to expound at some length on the way that R&D works in more conventional universes.

Unsurprisingly for a novel that was essentially the culmination of ideas with which Darnay had been playing all through the 1970s, this is a very 1970s novel. There is climate change but it’s a post-apocalyptic ice-age. The author’s fascination with Eastern spiritualism is typical of the period [5]. The framing of the nuclear waste controversy is in Disco-era terms. The energy crisis is presented as insoluble; Darnay does not offer such solutions as (on the one hand) fracking, mining of tar sands, deep ocean drilling, and coal gasification or (on the other hand) renewable energy technologies such as solar, wind, tidal, biomass, or geothermal. He clearly was not prescient enough to predict that OPEC would demonstrate why cartels are unstable — which lapse would in itself be sufficient to date this book to within a half-decade. He was in no way alone in this oversight [6].

It’s not surprising that a hippie era book should read like one; what might surprise a lot of current Baen fans is that Jim Baen published it. Sure doesn’t fit the standard narrative about Jim Baen.

Darnay returned to science fiction in 2009 with two linked novels, Ghulf Genes and In Search of Anna Magna. I have read neither and have no opinion about them. His blog can be found here.

1: Yes, there was indeed a movement to give Jim Baen a Best Dead Editor Hugo. Wouldn’t have meant anything to dead Jim Baen. It would have been a sop to fans trying to assuage their guilt at having forgotten the existence of their supposedly favourite editor once he stopped editing popular magazines. In Baen’s case, that translated into a quarter-century hole in his lengthy list of Best Editor nominations.

2: In defense of the people now running Baen, they’re just not as talented as Jim Baen, which may why one of them apparently wants a Best Editor Hugo for, as far as I can tell, just showing up.

3: Actually, I have the Ace mass market paperback, which had a rather Wollheimian title: The Karma Affair. 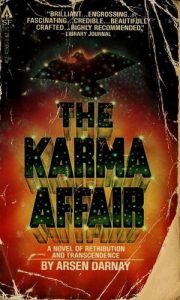 I liked Darnay’s fiction before his long hiatus — have not tried the new stuff yet — but I didn’t hardcover like it.

4: As far as I can tell, Darnay made the Shashtuk up out of whole cloth. They certainly don’t seem to be a particularly nuanced depiction of Native Americans. They seem to exist mainly to preserve important spiritual information that poor civilized people have forgotten (a Native American version of the Magical Negro).

5: I will admit that, while I was reading this book, there were moments when I wondered if David Mitchell had encountered Darnay at a formative age.

6: And of course, a lot of the tropes people came up with during the Energy Crisis were recycled wholesale for post-Peak Oil stories. Remember Peak Oil? It used to be a thing.