Sloth is its own punishment. I could have gone across the room to the large box of books Resonant sent me [1] to select something to read. I could even have picked up either of the two books at the bottom of the stack of unread books nearest me [2] … but instead I picked up the 2015 English-language translation of Mamare Touno’s 2011 light novel Log Horizon: The Beginning of Another World . It was the book on the top of the nearest stack and it looked short.

The tale begins with a promised upgrade to a (fictional) MMORPG called Elder Tales , a popular online game, with 30,000 players in Japan alone and more world-wide. The developers promise to make an already interesting game even more fascinating. They live up to that promise in an unexpected way: everyone who was logged on when the upgrade went live suddenly finds themselves transported to the world of Elder Tales , trapped in bodies just like those of their player characters (which is to say hot, fit, and tingling with very special abilities).

It doesn’t take too long for veteran gamer Shiroe and his friends to realize that because this new world has no detectable connection to the real world, law enforcement in the real world cannot possible apply. The only social rules that matter are the ones the players themselves enforce [3]. While most people aren’t inclined to embrace a Hobbesian world of all against all, it only takes a few griefers to make the world a dangerous place.

Also, there are monsters.

Years before, Shiroe and company (cleric Marielle, fighter Naotsugu, and assassin Akatsuki) were part of a loose affiliation of players misleadingly called the Debauchery Tea Party. Although the players seemed to have little in common, they worked together well. The Debauchery Tea Party is a natural seed around which a new company of adventurers could form for mutual protection.

Unlike a certain other franchise about people trapped in computer games, character death in Elder Tales doesn’t spell actual death for the players or their characters; they just respawn at some designated starting point, minus their gear [4]. Still, it’s inconvenient.

Together they will conquer the world of the Elder Tales ! Or at least not get killed exploring it! Beginning with a mission to retrieve an ally from a distant town, despite the efforts of a large band of high-level bandits, who aim to kill them all and loot their stuff.

Aside from Akatsuki’s unwanted gender issues (she was playing a male or at least androgynous character, but the game turned her into a girl) and a certain amount of time spent by compulsive horndog Naotsugu slut/Osaka-shaming Mari, not a lot happens in the book. The rules of the game world and the ways they differ from real-world rules are explained.

We do see various skirmishes explained in great detail; David Weber should be jealous; Touno manages to cram about as much tedious combat detail into his 200-odd page novel as Weber shoehorns into any of his rambling tomes.

I’m afraid I found this novel rather uninteresting. It couldn’t even manage to be interesting for being very very bad. I’ve seen ​“players trapped in a game world” before now; there’s nothing I can see here (aside from egregious sexism, also featured in Sword Art Online ) to make this novel stand out from the crowd. The prose isn’t interesting, and the characters are one-note: Mari has large breasts and a poor grasp of boundaries! Naotsugu is a pervert who thinks everyone else is too! Shiroe is cunning! Akatsuki lurks in shadows! It’s not as awful as Norton’s Quag Keep (or the unfortunate sequel) but it’s certainly not memorable. But it was short.

1: Seriously, all of these are within three meters of me: 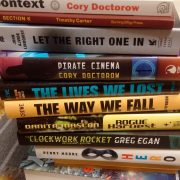 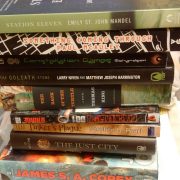 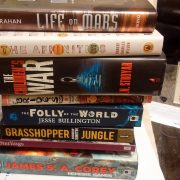 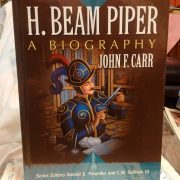 2: The Carr bio of Piper and the latest James S.A. Corey are still on the table nearest me.

3: Well, plus some rules enforced by the game mechanics. Violence doesn’t work in towns, for example. I call this the ​“Keeping Player Characters from Beating Wirt with His Own Wooden Leg” rule.