1966’s The Moon of Three Rings is the first volume in Norton’s Moon Singer series.

Yiktor appears to be just another world among millions, a world once home to an advanced civilization now long vanished, just as so many civilizations have flourished, then vanished, across the galaxy. Now Yiktor is a world whose current population is (seemingly) trapped in barbarism. To Free Traders, it is a possible source of valuable trade goods. To a greedy Combine seeking worlds to conquer, Yiktor looks like easy pickings. As they will learn, the great civilization that called Yiktor home is not extinct, but merely evolved beyond recognition.

Krip Vorlund is a junior member of the crew of the free trader Lydis. Like the rest of his crew, he is touring a trade fair on Yiktor, hoping to find some commercially viable novelties: items small and valuable enough to make them worth shipping between the stars. Maelen’s collection of trained animals seems an odd match for Krip’s needs, but her animals are unusually well trained and the show will be rare enough to be a draw.

Unbeknownst to Krip and the enchanting, alluring Maelen, off-world forces have cast their eyes on Yiktor. While the Combine is still working up the courage to strike openly on Yiktor, their local ally, the ambitious Lord Osokun, is bolder. Krip soon finds himself thrown into an alien dungeon. Osokun intends to torture the trader until he reveals the secrets of off-world weaponry.

No trader is allowed to wander around on Yiktor without a mindlock against sharing the very knowledge Osokun seeks; so, Krip is mindlocked. This is bad news for Osokun and worse news for Krip, who is unlikely to survive his stay in Osokun’s dungeon.

Osokun and the Combine have underestimated Maelen and her people, the Thassa. The Thassa predate all known civilizations on Yiktor — they seem to be a different species than the other inhabitants of Yiktor — and while they are now nomadic, it is only because they have chosen to turn their backs on sedentary life. Certain of the Thassa, the Moon Singers, command vast powers of mind; Maelen is one such. In surprisingly short order, Krip is free from imprisonment and on the run from his pursuers.

There’s just one catch; to throw the hunters off Krip’s trail, Maelen has transferred Krip’s mind from the body he has known all his life to that of a four-legged beast. And it is not at all clear that he will ever see his old body again.…

Although this book was first published in 1966, my copy is from 1970. I can tell from the Jack Gaughan cover art and the price … but the biggest clue is this trippy title page: 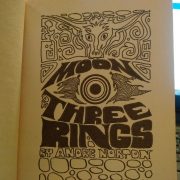 I quite like Robin Jacques art for the first edition. 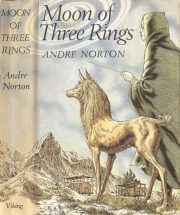 The hypnoconditioning element reminded me a bit of L. Sprague de Camp’s Viagens . The motivation for the mindlocking is much the same: nobody cares to see to what uses feudal lords might put nuclear weapons. A sensible position, given what the supposedly civilized peoples of the galaxies have done with weapons of mass destruction.

Another book came to mind as I was reading this: Mary Gentle’s Golden Witchbreed . Planet with a long, glorious history forgotten by everyone save a small elite; high-tech remnants in a world scoured by arcane war [1]. I don’t think this is coincidental; Norton is part of the tradition on which Gentle was drawing.

Norton generally isn’t keen on large-scale, high-tech, urban societies. This book is one more instance of that attitude. Yiktor’s current culture doesn’t have the know-how to keep large scale societies functioning. While the galactics do, they’re mostly interested in exploiting lesser worlds for profit. The Thassa once had a civilization of high degree, but they came to see it as a mistake and reverted to what certainly looks like a lower technology (albeit one backed up by what amounts to magic).

Maelen is not the sole protagonist in this novel; she shares the spotlight with Krip, alternating with him as the viewpoint character (very conveniently for the reader, because there’s a lot Krip isn’t in a position to know). She’s arguably the more active member of the pair. It’s quite a change from Norton’s early books, in which women were peripheral at best and often nonexistent.

Moon of Three Rings has been reprinted many times over the years, on its own and in omnibuses. I recommend checking your used bookstores (real and online) and libraries.

1: Although I’d think offworlders would have noticed the evidence that WMDs had been used at one time, once they had ships in orbit. It’s a plot point that atomic-war-scoured worlds (many such wars long predating humanity’s entry into space) are common enough that spacefarers know the signs.