C. J. Cherryh’s 1978 The Faded Sun: Kesrith was her fourth novel and the first in her Faded Sun trilogy. It would have been a fine choice for my Because My Tears Are Delicious to You series … save for the trifling fact that I managed to overlook it until the 1980s, after I had stopped being a teenager.

The alien Regul are fighting a losing war with the human Federation. That is, mri mercenaries are doing so, on behalf of their Regul clients. The mri are in many ways difficult: aloof, easily affronted, and inflexible — but they are extremely effective warriors. The Regul have nobody but themselves to blame for their losses. The Regul are bad bosses, the sort who insist on taking a hand in matters they do not understand, then blaming and punishing subordinates for the ensuing setbacks.

As the book opens, matters have become so dire that even the highest ranking Regul cannot deny the war situation has developed not necessarily to their advantage1. They have no choice but to concede territory to their human enemies. Territory like the world Kesrith.

Kesrith still has a surviving population of mri. Granted, there are only thirteen mri, but given their effectiveness, they could be a troublesome complication, for either humans or Regul. They could resist the humans, OR, they could ally with them.

The Regul have hidden the approaching handover from the mri, playing for time, but time is running out.

The tidiest solution, from the Regul POV, is to simply exterminate Kesrith’s mri. Both humans and mri would likely protest, if they knew what was coming … but they do not.

The Regul are no better at genocide than they are at war. Two mri, Niun and his sister Melein, are elsewhere and escape the slaughter. They turn for help to a former enemy: Sten Duncan. A human.

Not only did I overlook this book until 1983, but I read the series out of order. Probably because the third book had the most eye-catching cover. No offense intended to Gino D’Achille, cover artist for the first volume and for its immediate sequel, The Faded Sun: Shonjur. 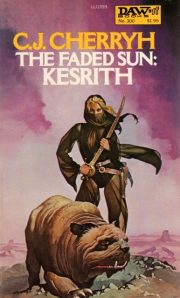 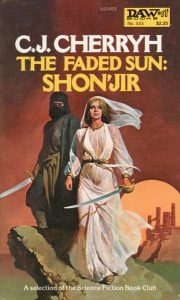 It’s just that Michael Whelan’s cover for the third book was my kinda thing. 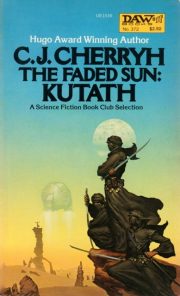 I am just that shallow!

I have a feeling that the mri caste structure (adults are divided into warrior kel, scholarly sen and nurturing kath) is based on a specific anthropological model popular in the 1970s. In fact, I am pretty sure I have read an essay that discusses Cherryh’s sources for the mri. Rather frustratingly, I cannot find the essay. Does anyone here know where it might be found — or even that it exists?

Fans of Cherryh’s Foreigner series will find the Faded Sun trilogy of interest. It is not that Faded Sun is a rough draft of Foreigner (although it’s suggestive that the human protagonists have parallel names: Sten Duncan and Bren Cameron: —en and a Scottish surname.). The series differ in many respects, not least in the balance of power between human and aliens. They do touch on similar themes.

I recommend buying and reading the entire trilogy as one long work. Further, I find reading them in publication order is superior to reading them in book 3, book 1, and book 2 order, as I originally did. DAW very considerately makes this easy by offering the trilogy in omnibus form.

1: More exactly, the war has developed not to the advantage of the specific group of Regul located on a region of Regul space that borders human territory. Rather uncommonly for SF aliens, the Regul are not a monolithic, unified bloc, but a cluster of related groups, each with its own agenda.