1955’s The Martian Way and Other Stories is a collection of four short works by Isaac Asimov, one of which is, I think, rather well known. The three others? Not so much. Still, this was one of my go-to books as a teen. I just didn’t (and still don’t) think the other three stories had the same oomph as The Martian Way.

So how well did this classic stand up, you ask?

The fledgling settlement on Mars pays little attention when they are attacked by a terrestrial demagogue, at least in the beginning. Hilder’s impassioned ranting about the vast sums paid out for the settlements on the Moon, Mars, and Venus and the much smaller sums Earth has received in return is bad enough. But it is his obsession about Terrestrial water lost forever to space (as reaction mass) that threatens the settlements. Without access to Earth’s water, they will die of thirst!

Spoiler: they don’t, because they head out to snag ice from Saturn’s Rings.

I had not reread this story in decades. Consequently, I had forgotten quite a few of the details. I remembered the water crisis. Asimov’s cunning name for his antagonist, and his attempt at portraying what is now called the Overview Effect. One of the instances in which SF has truly been prophetic.

I had assumed that for the purposes of the story, the asteroid Vesta had to be dry. Why go all the way to the rings of Saturn if you can get your water from a location that is much closer? But Vesta is water-rich in this story, much to my surprise. I would guess that Asimov picked the rings of Saturn because they are cool and because he thought material from the rings would be easier to snag than material from the surface of a large asteroid. Sadly for ring-miners, the rings are rings because they are close to Saturn: the outer part of the A Ring is zipping along at 16.7 km/s. Escape velocity is sqrt 2 × orbital velocity, so escape velocity from the A Ring is about 23.6 km/s. Saturn guards its water treasure.

Speaking of details I forgot, this story features a grotesquely abrasive harridan. Asimov’s not generally the go-to guy for female characters (Susan Calvin, Bayta Darell, and Arkady Darell aside) but this is pretty special even for him.

There are some very nice images in this (and some convenient images if anyone is looking for examples of American exceptionalism IN SPAAACE!) but now that I know more about rocket science (compared to my blissful teen ignorance) I kept noticing is that a lot of this story doesn’t make much sense. It’s not just the orbital mechanics stuff; the Martian rockets display an unimpressive performance in an earlier section of the story, but are able to push a mountain of ice from Saturn to Mars in a few weeks in another.

Oh, well. It’s not as if authors have learned any more rocket science in the decades since Asimov’s story was published. Readers love this classic; this story has been included in anthologies as recently as 2010. As usual, the details that vex me do not vex others.

Some people survived the atomic wars but they were trapped in a long, slow decline; comfortable enough now, but with final collapse into preindustrial barbarity in sight. Contact with galactic merchants offers the possibility of a renaissance. They can gain access to off world high-tech in return for fossil fuels to be used as chemical feed-stocks. Things look rosy … and then the galactics’ ship crashes on landing. Trapped on a world of giants, crammed into a cage by well-meaning children, the tiny emissaries will have to rely on their most powerful weapon to survive: common decency!

Asimov’s careful use of descriptors instead of names for the adults kind of telegraphs that there’s a big twist coming in the story, but it’s not immediately clear which of the two likely Big Twists (A. the atom-blasted survivors are human; B: they are not) will be the case.

Where The Martian Way has a harridan housewife, this story has a female who screams at the sight of small animals. Damn it, Asimov!

One nice touch is a Science Marches On detail: both the Galactics and the planet-bound have fairly good models for planetary formation, and both models turn out to be incomplete. Another nice touch is that the solution to the travelers problem turns out to refrain from casually gunning down inadvertently dangerous natives. It is kind of sad that ​“Have we tried being decent chaps” stands out but there we are.

Rather to my surprise, Youth has been reprinted more recently than The Martian Way .

Trapped for a million years beneath the surface of their frozen world, aliens invest most of their remaining resources in a desperate effort to reach and colonize a living world — Earth! An already inhabited world, true, but to a race formerly confined to a cave only hundreds of kilometres long, it seems large enough for two races to share in peace.

Except, as the aliens discover to their horror, humans know who their children are, a custom as outrageously offensive to right-thinking people as to make open contact forever off-limits.

I feel like there was the seed of a much better story in this short piece. There’s at least one alien who knows her offspring (even though the aliens would deny that any of them have ever indulged in such perversion). It’s a shame that the knowing alien mother is portrayed as an inferior and rather pitiable individual.

I suspect another author would have had the island that the aliens quietly commandeer as their foothold on Earth turn out to be Bikini, but Asimov went for a higher grade of cheap thrills (see the next story),

The planet Troas is unusual in two ways:

A century after the mysterious malady swept humans from Troas’ surface, the starship Triple G touches down, its mission to discover what wiped out the settlers.

It is not at all obvious what killed the colonists: disease from one world cannot infect visitors from another and none of the standard known hazards appear to be present. The colonists died of something, though, and if the explorers cannot work out what it was, they risk becoming its victims as well.

Cool setting. Shame that it’s not actually as stable as Asimov needs it to be, although I don’t know if that was known in 1954.

At least there are no regrettable women characters in this story. Instead, we get something of an idiot plot, one that depends on a crew of specialists so specialized that none of them know the effects of a now obscure element no longer used in industry, save for one abrasive and inarticulate generalist. They could know: this is a future with lots of computers and extensive databases. But you have to know to ask a question to find the answer. The plot is resolved when the generalist singlehandedly saves the ship; it would have been more sensible, if less dramatic, if he had simply pointed out that the planet abounded in a toxic substance. I understand the need for drama, but the story is still kind of silly.

The interesting thing for me about this story is its history. This is a relic of the Twayne Triplets series. Poul Anderson wrote a companion piece, Question and Answer , with a similar setting but a different plot, but the third author (either Kidd or Blish) never finished their story. The Twayne Triplets ground to a halt and Asimov and Anderson had to find new homes for their stories. 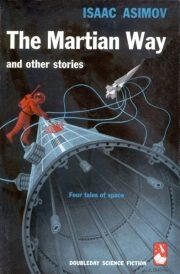 I see the first edition of this collection was from the SFBC„ so I would guess that we can thank Walter Bradbury 1 for it. I am pretty sure that Bradbury was the first editor of the Science Fiction Book Club. I cannot be completely sure, because when the 50 th anniversary of the SFBC arrived in 2003, it turned out that nobody back in 1953 had ever bothered to record the name of the first editor. Because everyone knew it. Then. 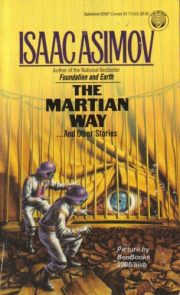 I’ve never seen the SFBC edition. For that matter, I never saw the 1989 Del Rey edition, which I think was the last time these four stories saw print in this form. For me, the one true edition is the one I have, the Fawcett Crest paperback with the Paul Lehr cover art.

I wish this book had stood the test of time better; in particular, the dismal treatment of women in three of the stories was an unwelcome misogynistic surprise. Oh, well. This series is called Because My Tears are Delicious to You for a reason.

1: I was going to link to an online bio of Bradbury, an influential editor at Doubleday, but I couldn’t find one in time.