It’s not just that this is explicitly a sequel to someone else’s book, General Sir John Hackett’s The Third World War. Or that Ing teeters on the edge of inventing the technothriller genre (before Tom Clancy, if one considers The Hunt For Red October the first technothriller; please feel free to debate genre history in comments). Or even that one of the books features a lovingly depicted Segway, decades before those were invented. Ing brings an … ahem … unusual political sensibility to this trilogy. I believe that’s what has kept this series out of print. 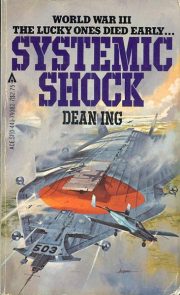 1985’s World War Three only killed two cities and a million people, but it completely changed the geopolitical map. No more NATO versus the Warsaw Pact. In 1996, the great divide is between the Allies (North America, Europe, and Russia, plus a handful of others) and SinoInd (Sino-Ind), a swathe of equatorial nations reaching from Brazil to China. The Allies have the advantage of fully developed economies, but their rivals are rapidly industrializing, have a distinct advantage in population (as cannon fodder and workers), and in some fields, a technological edge.

The world is only one cascade of bad decisions away from a protracted battle between two gravely wounded behemoths.

Ted Quantrill is still a boy scout when the missiles start flying. It does not take long for him to lose every relative and every friend he ever had. What Quantrill has going for him is a talent for survival combined with a gunslinger’s reflexes. It’s a combination that the government will put to good use. As they define good.

Quantrill is dogged by the self-serving machinations of a would-be plutocrat named Borden Mills. Mills is as close to an antagonist as the books have, but I am not sure Mills and Quantrill ever meet face to face.

I wish I could find online copies of the maps in this book, partly because it would make explaining the geopolitical situation easier. This is a world where Canada has taken control of about a third of the US territory. As a favour to the US, mind you: Edmonton, Toronto, Montreal and Ottawa may have been annihilated, but that doesn’t stop the plucky Canucks from playing a far more significant role in WWIV than anyone familiar with Canadian demographics or our traditional policies about military spending would expect1.

I am not particularly convinced by Ing’s version of the clash of civilizations, with the Europeans and European settler-colonies on one side, and the oddly Islam-dominated Asian nations on the other. (Ing does explain why it was politically expedient for China to seem to accommodate Islam: access to oil.) Nor am I convinced that the US and its allies wouldn’t falter just a teensy-weensy bit after losing 40% of the population and 90% of their industrial base (even the 25% loss inflicted on the SinoInds seems like the sort of thing that would make nations pause). The subplot about Israel relocating en masse to L5 is, uh, very of its time.

The war and its shiny shiny technoporn is only half the novel. The sections detailing Quantrill’s metamorphosis into a human weapon work reasonably well. 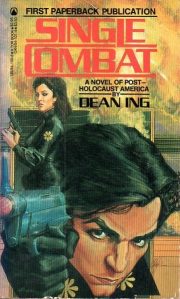 Streamlined America is Mormon-dominated. Not only was living where the bombs didn’t fall the key to survival, but the Mormon practice of keeping a year’s worth of supplies gave them an edge. Many Gentiles converted after being saved by those supplies. President Young foresees a glorious future in which American policy is guided by the Quorum of the Twelve Apostles, led by none other than Young himself.

The fact that this violates constitutional law does not bother Young, nor does the fact that most Mormons would object to his plan. Dubiously sane Young sees himself as a messianic figure. Fate has handed him the tools he needs: a battered America willing to set aside certain civil liberties during reconstruction, control of national media, and best of all, Section T, America’s own death squad.

Section T’s assassins are loyal to the death. Literally: every killer carries a remote-controlled bomb in their head. Defection is a death sentence. The assassins of Section T are a bright, highly motivated group of survivors. None are brighter or more competent than Ted Quantrill. As Young will learn to his cost.…

I didn’t remember this aspect until I was literally in the middle of posting this review but Young is yet another example of the American take on the Evil Vizier: in fiction, American Vice Presidents (and former Vice Presidents) are very often power-hungry monsters. I am going to blame Nixon for this trope.

There is a frankly bizarre subplot about a plump, sex-starved starlet’s fatal attempt to seduce a giant mutated boar that just makes me tilt my head at the text every time I encounter it. Seriously, what the hell, Ing?

Whereas the first book is technothriller MilSF, this is a technothriller espionage novel. Imagine a Bond movie in which Bond finally realizes that he is working for Spectre.

Both this novel and the first feature Action Girl Sanger. Quantrill may be a two-fisted man of action, but he’d be dead meat if not for Sanger. 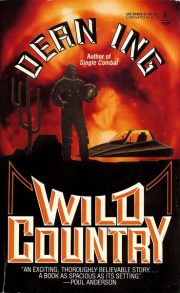 The mad President has been stopped, what’s left of the US (Streamlined America) is back in law-abiding hands, and Quantrill is retired from covert ops. There are not many jobs that call for his very specific set of skills. One of them is lawman in the untamed country between Mexico and Streamlined America.

Long-term-love-interest Sandy is cool on the idea of Quantrill as a lawman, perhaps because so many of Quantrill’s colleagues have ended up dead. She will marry Quantrill, but only if he walks away from his badge. Which Quantrill is completely willing to do. After just one more assignment.…

This is a technothriller Western. It’s also the final step on Quantrill’s path from merciless killing machine to something a bit more human. Being able to out-gun and out-fight everyone is well and good, but it’s a career that leads to an early grave.

It may seem a bit odd that Ing shifts focus from global politics to purely local concerns over the course of the series. No two of the novels can be classed in the same genre. Perhaps Ing did not, at first, have a clear sense of where he was going with the series (perhaps when he was writing Systemic Shock he did not even envision the book as the first ofa series) but by Single Combat he has decided that the story is about Quantrill, not about the clash of civilizations. In that context, the tightening focus makes sense: job versus lover what matters to Quantrill.

Ing kills off more than half the US, but (unlike some authors) I don’t get the sense he holds any animus against the urban population. It’s just that being at ground zero (and having no effective plans to get away from ground zero) will negatively affect one’s odds of survival during a Great Unpleasantness. Similarly, while he grants the Mormons an edge in dominating Streamlined America, he seems to have a fairly dispassionate take on it all: he presents it as plausible, not necessarily desirable.

I was very surprised to discover that while Ing is affiliated with a certain publisher I do not mention here (which has a superlative record at keeping older SF in print), this series is not among the Ing books they publish. Similarly, Tor, who originally published this series, seems to have allowed the series to lapse into obscurity a generation ago. While I must admit that this trilogy has some regrettable subplots and some frankly hilarious worldbuilding, other series with even more regrettable subplots and even more hilariously implausible worldbuilding have managed to stay in print. And it isn’t as if the series isn’t a good read (thrilling adventure tale subset). It has character development! And two-fisted action! And so very many shiny guns2.

I have a theory about what it is that has discouraged reprinting. A theory that is perhaps wild-eyed and paranoid, but just plausible enough that I think I can avoid a mental health examination. I think the problem is Ing’s faith in America. No, no, keep reading!

WWIV starts in August 1996. By the end of August, almost half of the American population is dead. Communications are in disarray. Presumably, vast legions of diseased and radiation-raddled refugees are still stumbling towards their final resting spots. Despite this, the Presidential election still happens pretty much on schedule. After the war, a nut and his enabling minions try to transform the US into a panopticon theocracy. The US turns out to be robust enough to survive that too. When was the last time you read an SF novel that portrayed the US as resilient3? The general consensus in American SF is that the US is this vast, delicate, gossamer bubble, one tiny pinprick away from collapsing into sugar dust. Left and Right won’t agree on the reasons that the US is doomed, but they generally agree that it is.

Ing doesn’t. In general the politics on display in this series do not line up nicely with the politics in the current factions within SF4. There’s something in here to annoy everyone. Quite possible that is why the series is currently out of print.

A pity. The trilogy is odd, sometimes self-indulgent, but definitely has its points of interest5. It’s a shame your only hope is used book stores.

1: Not only does Canada magnanimously take on a third of the US, but Canadian aid hobbles the devastated Russia. Not by accident. SinoInd may be the enemy du jour, but there is only room in the north for one arctic power and Canada intends to make sure that it won’t be Russia. Screwing allies is a running theme in this book: One of China’s goals is to remove the Indian threat from their southern flank by using India as a meat-shield during the war.

Ing has some familiarity with Canada (he name-drops Dieppe) so I am not entirely sure where he gets the idea we are the Warrior Geniuses of the North.

2: It passes the Bechdel test, which surprised me.

3: To be fair, John Barnes’ recent Directive 51 trilogy not only posits a resilient US, it derives a lot of the plot from American continuity of government systems. Specifically, that in the trilogy there are several legitimate COG plans and they are not compatible with each other. It’s my impression Barnes was not happy with the published version of the books (neither was I) and is rewriting them but for the life of me I cannot recall where I read that.

4: After the war, opportunistic business magnates try to dial back labour law and benefits by a century or so: this is depicted as both wrong and self-sabotaging.

5: Including the interesting detail that by 2002 in Ing’s world, what we would call CGI is pretty cheap.