Fritz Leiber's 1958 Hugo winner The Big Time fits a very large setting into a very small package. The context of the novel is the Change War, which is being fought to reshape history across the universe. Narrator Greta, doppelganger of a slain American woman, has a very minor role in the war; she is an entertainer in the Place, an R&R facility tucked away in a pocket universe. Unfortunately for Greta's life of routine, the War is about to intrude into the Place.

Whatever the two factions, the Spiders and the Snakes, are fighting over is something a veteran like Greta is never going to learn, but their methods are plain: both sides continually fiddle with history, hoping to tilt events in favour of their side. On a personal level, the effects are profound—the original Greta, the one whose doppelganger was recruited by the Spiders1, was raped and murdered2 by victorious Nazi soldiers swarming through Chicago, But on the grand scale, history has inertia and almost always corrects itself. Making a Change that will affect the outcome of a war spanning the universe and two billion years is very, very hard. It's too bad for Greta and her companions in arms that all signs point towards the Spiders being the losing side despite their increasing desperate measures.

Greta and the rest of the staff in the Place entertain a never-ending stream of shell-shocked soldiers needing rest and diversion. It’s a boring, humdrum life. Then someone (or someones) in the Place finally has their fill of endless war. They commandeer the pocket universe's scuttling option, apparently casting it into the Void forever.

This isn't so bad; the people in the Place are finally safe from the war and its Change Winds. The Place is self-sustaining and can maintain life indefinitely. Alas ... some soldiers currently visiting the Place are carrying a small nuclear bomb. Greta’s boyfriend Erich Friederich von Hohenwald, former Oberleutnant in the army of the Third Reich, loathing the very idea of peace, activates the bomb timer. Greta and her chums have thirty minutes to work out who is responsible for isolating the Place and how to reverse the process before they all die.

The Spiders are the faction that recruited Erich and handed the 20th century on Earth to the Nazis. They press-gang people into their side of the Change War and use ghost girls as sex toys for the troops3, The Spider cause is never explained, either to the readers or to the characters in the story. We see only the Spider methods and the effects of their actions, none of which make a strong case that the Spiders are the good guys. There's just as little evidence in favour of the Snakes’ moral purity; it is not that kind of war.

(Although as far as Erich is concerned, the War itself is its own justification; as long as he is fighting someone, he is happy.)

This is a science fiction version of an enclosed place mystery, in which the setting—a snowed-in train, an island manor isolated by weather, and so on—has prevented the perpetrator or perpetrators from leaving the vicinity. They must still be among the characters. Here, the constrained setting and the ticking bomb make for concision and suspense ... both deftly realized by the author.

The vast scale of the war, which is established early on, is a contrast to the intimate scale of the Place and the events therein; nothing that happens there is going to change the outcome of the War. But because we care about Greta and her friends, we want them to live.

Leiber wrote a fast-paced, entertaining book, which explains why it won a Hugo way back in days of yore and why you might enjoy reading it now. Because someone forgot to renew the copyright, the book is available for free in various venues. The other stories that make up the Change War sequence are, as far as I know, out of print but used copies of this: 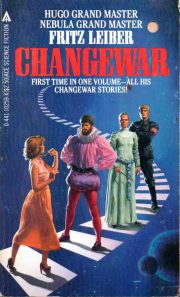 should be easy enough to track down.

1: It's possible to spawn multiple doppelgangers based on one person; the same person can be recruited by both sides.

2: Or as she euphemistically puts it, “loved to death”. Ick.

3: Unlike Greta (who is a demon, someone whose doppelganger retains free will—as do the soldiers in the war), the ghost girls have no free will. Insta-girls with no agency are an off-putting idea. Leiber, for all his authorial virtues, was never the go-to writer for “ahead of his time where Women's Lib was concerned.”

Now, someone may object because after all Greta and the other demon women in this do play important roles, to which I say “Don't make me bring up the 'babies forever' subplot.”