Norman Spinrad’s 1972 nested alternate history novel The Iron Dream isn’t my favourite Spinrad1, but it is almost certainly his most famous work. It earned a Prix Apollo Award and a Nebula nomination. The book was also indexed by the Bundesprüfstelle für jugendgefährdende Medien , the German Federal Department for Media Harmful to Young Persons, for alleged Nazism and was placed on the American Nazi Party’s recommended reading list. Perhaps some explanation is required.

Spinrad’s The Iron Dream is composed of two sections. The final section is a commentary by a fictional academic named Whipple. The first part, the part that earned Spinrad unwanted attention from the BJpM and the American Nazi Party, is Adolf Hitler’s Lords of the Swastika .

Written by a Hitler who fled Germany for the US in 1919, Lords of the Swastika takes us to a future world that was scoured by atomic warfare more than a thousand years earlier. Pure strain humans, the Truemen, are virtually extinct. Mutants and monsters abound, the legacy of radioactive fallout and the machinations of the telepathic Dominators.

Heldon is the only nation with a remaining Trueman population … and that population is in danger. Ferric Jaggar, the child of Heldonic exiles, returns to the homeland he has never known and discovers that corrupt politicians and Dominators are conspiring to bury Heldon under a wave of mutants. But they have planned without Jaggar.

In surprisingly short order, Jaggar finds allies, seizes power, and disposes of the corrupt politicians and Dominators alike. With mighty Heldon unified under him, he launches nothing less than the conquest of the world and the total extermination of mutant-kind.

This is nauseating stuff — but of course, it is supposed to be. Spinrad uses Hitler’s historical crimes as the basis for a thrilling pulp science fiction story. The result is a novel that could quite plausibly been published back in the golden age. Or, to be honest, more recently. 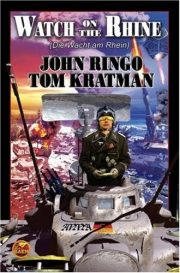 A glorious embrace of eugenics and genocide is hardly unknown even in modern speculative fiction. In fact, the big Twist in classic SF novel The Mote in God’s Eye was the protagonists bold decision not to commit genocide.

While on the whole I would defend Spinrad’s creative choices in this novel, there is one stumble revealed in the commentary by Whipple. In the course of dissecting Hitler’s florid but very successful novel, Whipple reveals that in his world, the one where Hitler emigrated to the US and kept his grandiose schemes to the realm of pulp fiction, the Soviet Union managed to conquer most of Eurasia by 1959. It’s this fact that causes Whipple to dismiss accusations that Hitler was anti-Semitic, since the Domination is clearly the Soviet Union and since the Soviet Union Whipple knows is virulently anti-Semitic, it makes no sense to him to conflate Jews with the Soviets. This suggests that, had Hitler not ruled Germany, the Soviets would have conquered the world. I am certain that’s unintended; Spinrad’s game is something else entirely.

This is in no sense a subtle novel 2. In my experience, Spinrad is not one to whisper when an airhorn is handy. In this case, blatant directness is essential. Indeed, while most readers got Spinrad’s point, some people missed it. Some were puzzled by the ruination of a rollicking adventure novel by the (to them) inexplicable mention of Hitler. Worse yet, others took the book at face value, as promoting genocide. One could argue that Spinrad managed to hit on a subject where even he could not be blatant enough.

I don’t know that I’d recommend this as an enjoyable read, exactly, but I do acknowledge that it does exactly what the author intended.

The Iron Dream can be purchased here.

1: I remember liking Riding the Torch , Child of Fortune , and Spinrad’s Co-Evolution Quarterly-influenced post-apocalyptic Songs from the Stars . However, I have read none of them recently, so I may be remembering them through rose-tinted glasses

2: I regret the cover on my edition sadly tones down the Very Special Weapon that marks Jaggar as a Man among lesser men, the suggestively shaped cudgel he’s always jamming into people’s faces. 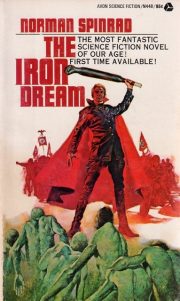