Every year, Kitchener descends into the beer-fueled riot that is Oktoberfest. Usually I kvetch at the multitude of inconvenient incidents precipitated by one million drunken tourists. (Kitchenerites, of course, can handle their beer.) This year I decided to embrace the abyss. I will review a book about beer. Which one? Tim Power’s 1979 standalone fantasy, The Drawing of the Dark.

Things are looking grim for the West. One by one, Christendom’s strongholds have fallen to S uleiman the Magnificent’s armies. Irish mercenary Brian Duffy, having narrowly surviving the Battle of Mohács, has turned his back on war and settled in Venice. Years later, it seems that Venice too is threatened. When Duffy is offered a job as bouncer in distant Vienna, he is quick to accept.

Duffy’s timing is a bit off. The year is 1529. Vienna is the next stop on Suleiman’s European tour. Even as Duffy makes his way across the Alps, Suleiman and Grand Vizier Ibrahim are even now considering how to conquer the city of Vienna.

Duffy gets an inkling that something uncanny is happening while he is still traveling to Vienna; he gains an honour guard of fell beasts. Beasts which protect him from the demonic beings murdering less fortunate travelers. Duffy manages to reach Vienna alive … but it appears that the supernatural is not yet done with him.

Suleiman and Ibrahim’s true target is not Vienna the city, but a brewery within the city. Once every seven hundred years, the Herzwesten brewery produces a very special dark beer, a potent quaff that can restore health to the infirm and, if consumed by the Fisher King, will return vitality to the West. The next draft will be ready in October of 1529. If the Ottomans have anything to say about it, the city will be in flames and the brewery demolished long before then.

Duffy knows the brewery by a different name: the Zimmerman Inn. His flight from Venice has placed him squarely on the battle lines between East and West.

The great thing about rereading something after a hiatus of decades is rediscovering scenes one has forgotten. In the case of Drawing, it is the scene in which Duffy sees the finished painting, ​“The Death of St. Michael the Archangel,” on which the artist Vogel has been working for decades. Vogel’s masterpiece is a tribute to what one can achieve with enough focus and effort.

The Drawing of the Dark was Power’s third novel. I bought it even though I had ignored his first two, 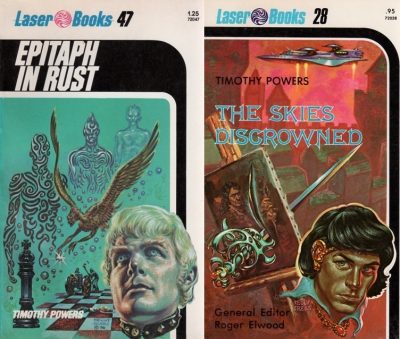 The Stars Disencrowned and Epitaph in Rust. They had been published by Laser Books, whose bland output I had learned to avoid. Sad experience had taught me to ignore the allure of their Frank Kelly Freas covers. Dark was published by Del Rey and eighteen-year-old me was very much a Del Rey fanboy back in 1979.

While the clash of East and West driving the plot may sound like yet another Islam versus Christendom tale, that’s not what’s going on. Religion is just a mask for a longer struggle, one which predates both Islam and Christianity. Hence a party of Germanic pagans who show up in Vienna to stave off what they fear could be the long-prophesied Ragnarok.

Indeed, it’s not all clear exactly what distinguishes East from West in this setting. It’s certainly not white hat versus black hat. Perhaps it’s the old rivalry of purple and green playing out.

This was the first of Powers’ novels in which he began to play games with actual history. As he said (in the context of his novel Declare):

“I made it an ironclad rule that I could not change or disregard any of the recorded facts, nor rearrange any days of the calendar – and then I tried to figure out what momentous but unrecorded fact could explain them all.”

The younger James found this book quite readable in 1979. After having read later works like The Anubis Gates , The Stress of Her Regard , and Declare, the older James felt that he was perusing a rough draft of a Powers novel. The basic elements are all there — the increasingly battered protagonist, the secret events behind the history we know, a coherent occult cosmology that explains why people did the odd things we know they did — but Powers has not quite worked out how to fit them all together. This is not to say that Dark is bad; it is just that later Powers novels were even better.

The Drawing of the Dark is available here. There are, I think, a couple of editions in print. 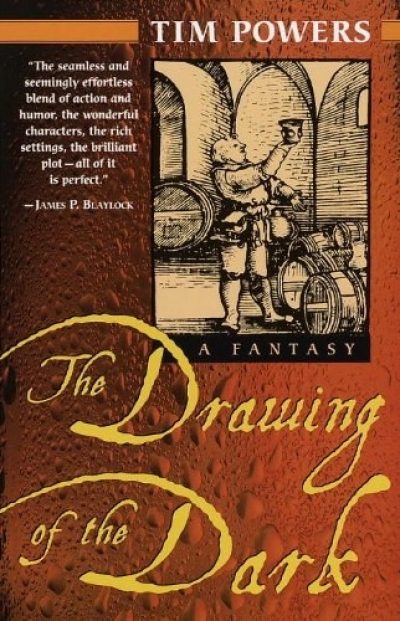 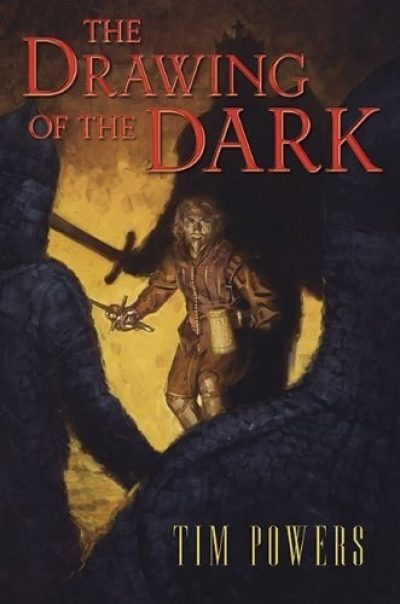 1: Who Duffy believes to be a Mandarin of some sort. I should probably have a warning about how Powers portrays anyone from outside the West. Let’s just say there are some problematic elements.

2: This footnote doesn’t exactly connect to anything in the text of the review; it’s just hidden down here so that none but my fellow permissive reformers will notice it. Because we’re the kind of people who read footnotes.

Back in 2015, Nick Mamatas asked an interesting question:

“Are there any aesthetically ambitious politically conservative SF/F writers younger than Tim Powers?”

As far as I recall, the answer was no: all of the candidates mentioned tended to be disqualified on minor technicalities, such as being older than Tim Powers. Although there was no reason to expect it back in 1979, Powers turned out to be the last of a breed.