I would have been willing to bet actual cash money — well, Canadian money — that if an Alan Dean Foster book were to be featured in this series, it would have been the first book in the Flinx series, The Tar-Aiym Krang. But that book doesn’t have a Michael Whelan cover1 and 1977’s With Friends Like These… does. Sometimes I choose books on the basis of their covers. I am just that shallow.

With Friends Like These… wasn’t Alan Dean Foster’s first collection. Very early in his career he began doing novelizations (many novelizations2) and by the end of 1977, he had already written no less than nine Star Trek Logs, based on the animated Star Trek scripts. I do think that this book was his first collection of non-tie-in works; the stories in it are among his first published stories.

Foster explains how it was that a young man who seemed doomed to be a lawyer ended up as a writer: the irresistible allure of college writing courses! Followed by a discovery that he could make a living writing and teaching writing.

Elective courses are Satan’s tongue in the ear of innocent undergrads. Although I suppose given his creative inclinations, if writing had not grabbed him, theatre would have.

When I read this in 1977, ADF seemed like a giddy young newbie. Now I see he must have been a Methuselah of twenty-five by the time his career began and an unimaginably ancient thirty-one when this collection saw print.

Facing a slow but inevitable defeat at the manipulating appendages of the Yop, the galactic Federation sees little choice but to turn to the previous existential threat to galactic civilization, the humans. Years sealed away behind a force bubble seem to have mellowed the terrestrials but of course, appearances can be very deceiving.

Foster is trying to emulate Eric Frank Russell here. Well, there are worse models, but the choice does give the story an anachronistic 50s pulp feel.

A nosy student pokes around in documents pertaining to something called Cthulhu.

This isn’t really a story but it wasn’t meant to be when ADF mailed it off. He was a bit surprised to have his jape met with an acceptance letter.

I would guess that this inspired the once-popular board game, Car Wars, which may also have been indebted to Ellison’s story ​“Along the Scenic Route”. I’m not exactly sure why stories about auto-duelling were so popular in the 1960s and 1970s, but examples abound.

Anger begets anger because idiots convince themselves that buying a sure-fire anger-inducing-device will allow them to win The Girl. As always, there’s an unscrupulous someone willing to sell them the device.

This is connected to the Flinx setting somehow, but I cannot quite see how.

What dreadful purpose tempts alien emissaries away from their first meeting with humanity?

Early Foster stories can be clunky, but even so, a decent editor would have forced him to tighten up this story. The point that this is the first meeting between humans and Murrin is made over and over.

T’ang Lang sees himself as the apex predator of his vast realm, but his grasp of the situation is a little buggy.

It seems to me likely that T’ang Lang should have been female, not male. The most impressive specimens of their kind generally are female. Ah, well.

A little girl dreams of the day that her grandfather’s efforts will be rewarded with a massive catch of sardines. But the oceans have been overfished and the new stocks are now carefully managed; there seems to be no hope that the old man’s stubborn persistence will ever meet with success.

This is a piscine reworking of Theodore L. Thomas’ 1967 The Weather Man, with a similar mix of sentiment and nature management.

An intelligent horse dreams of finding lost Earth, only to discover that finding the lost terrestrial homeworld is only the first and least difficult step towards his true goal.

I don’t know if this is the first SF story in which Earth is the first world to be terraformed. I think perhaps the Empire promised to repair Earth at the end of Pebble in the Sky, although I don’t know that there is any evidence they lived up to that promise.…

What could be more fun than swimming with a giant megalodon?

This had a painful romance subplot, even by the standards of the 1970s. And while it’s interesting the love interest is as skilled an academic as the lead, and that she is a POC, the story exoticizes her in a way familiar from dozens of South Pacific romances.

In a world where Poland is a paramount European power, an excitable girl convinces herself that there is a secret purpose behind Poland’s upcoming mission to Mars and that purpose is to claim Mars for Poland. She’s half right.…

Foster has a rather romanticized image of Poland as a nation and Poles as a people. It reminds me rather of Anderson’s treatment of Sweden in Tau Zero or how Harry Harrison viewed Denmark in The Daleth Effect. The actual Poland was not as warm and fuzzy as Foster paints it, but its history is still pretty interesting. Often in a sad way.

When a Native American harnesses his people’s magic to modern rock music, the inevitable result is … DEATH!

When his flier crashes in bad weather, a hitman’s life is utterly transformed by the old woman who rescues him and by the secret she guards.

Young Foster was fascinated by conservationism and environmentalism without being all that well informed about them (I don’t know offhand how available the relevant information would have been, way back in the Disco Era.). That doesn’t particularly affect this story, but as I recall, actually traveling to a rain forest made him rethink the world building of his novel Midworld3. 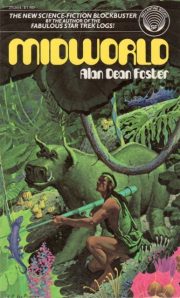 If the number of German translations is any guide, Foster’s works appear to have been popular in Germany. Why Germany in particular, I wonder?

Maybe it’s because I read this more or less back to back with a Tanith Lee novel but I am struck by how … meat and potatoes Foster’s fiction is and how prosaic his prose. It’s serviceable enough and I certainly liked it well enough when I was sixteen. I don’t dislike it now but perhaps I read this collection in conditions that highlight its weaknesses while casting insufficient light on its strengths.

And it does have a Whelan cover, so there was that.

There is a British edition of With Friends Like These… Lamentably the original cover art has been replaced by a considerably less interesting cover. 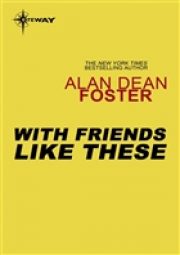 1: Instead, my copy had this perfectly acceptable cover. It’s credited to Dean Ellis but I think that is an error. 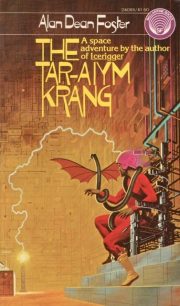 2: It is my impression that he got so much novelization work in the olden days because he was fast and reliable, a combination that companies really, really like.

3: The art I used is from the edition I own. Until I looked up Midworld on ISFDB I had no idea there had been an earlier hardcover. I don’t generally like Richard Corben’s art, but this isn’t a bad cover. 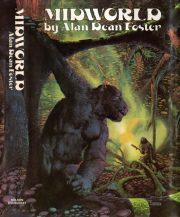