However, there is one major problem with reviewing one volume of Hitoshi Ashinano’s YKK every week … which is that all too soon I will have read the entire run. Oh, well.

Are Alpha’s dreams of flying merely dreams or do they reflect something real?

Apparently something real … but not the unconscious link to Monitor Room Alpha’s plane that I expected. Or so I would guess. Guess is the operative word here.

Alpha marvels at the wonders of nature, while Takahiro seems less appreciative.

Takahiro also turns down a chance to fight the cold by bathing with Alpha, which is a decision I bet he would not have made a few volumes ago. He does seem to enjoy watching Alpha run around in the morning frost.… 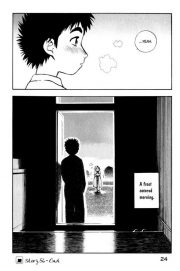 Alpha reminisces on the early days of the cafe, on her long lost Owner, and the life she made for herself after he abandoned her and the cafe.

The cafe was Alpha’s idea. I wonder what inspired her Owner to leave? A desire to let Alpha develop her own life?

Two conversations, one between Alpha and Sensei, and (far above in eternally air-born Taapon) one between Monitor Room Alpha and a robot who may be her mentor.

The conversation in Taapon is as allusive and uninformative as ever.

Sensei seems to see Alpha as a person now, which is a major change for the elderly woman.

Alpha’s exuberance results in a tumble off a cliff and a moment of irreplaceable loss.

Alpha falls off the same seaside cliff twice. Twice. In fairly short order. That’s a safety record I can respect. 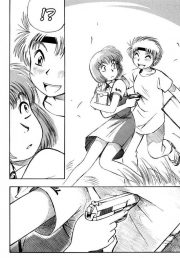 WTF Kokone? What can a messenger’s life be like if that is an appropriate reaction to being startled? Still, points to Maruko to not letting that deter her from (unsuccessfully) hitting on her crush.

With a simple bus shelter for cover, Alpha waits out a storm.

This episode seems to exist to justify the artist drawing rain and lightning.

Alpha doesn’t seem to have been especially traumatized by that time she was struck by lightning.

Nervous about an oncoming typhoon, Ojisan convinces Alpha to take shelter in his home, which is sturdier than the cafe and better protected from the wind. As she waits out the storm, Alpha worries what she will find when she returns to the cafe.

Rather than be disheartened by the legacy of the typhoon, Alpha chooses instead to embrace change. And travel.

There are some interesting subtexts here. One is that Takahiro is growing more distant towards Alpha as he grows older. Another is that Ojisan is aware that he might not live long enough to see Alpha again.

One of Alpha’s justifications for travel is earn money to rebuild. I wonder what job skills she has?

Kokone, unaware of what has transpired in the previous two stories, drops by for a visit. Ojisan graciously helps Kokone deal with the shock.

Alpha decides to leave her scooter with thirteen-year-old Takahiro while she travels. Their discussion provides a chance for mayfly human and robot to bond. The scooter also provides Matsuki with an excuse to seek out Takahiro.

People with vehicles never lack for friends with things that need to be moved from point A to point B. Although a cynic might say that Matsuki’s groceries are only a pretext to demand attention from Takahiro,

Takahiro was only nine in the first story, so about six months pass for each volume.

I think it’s amusing that Matsuki is always about two steps ahead of Takahiro. And that although they’re both still kids, they bicker like an old couple. Which they will be if the series lasts long enough.

I have joked about nothing happening in this series, and that nothing happening happens very very slowly. But in this volume, Alpha must deal with a major crisis that forces her out of her safe little shell. The crisis is not the sort of thing that lends itself to a comforting reset button. The next volume (which I have not read) seems likely to be some sort of road trip.