In any discussion of MilSFF, David Drake’s name is likely to come up earlier rather than later. Partly this is because he is seen as one of the founding figures of military SF (at least as it developed in the US). Partly it’s because, the occasional off-note aside [1], his work is generally never less than competent and sometimes very good [2]. Against the backdrop of the dismal swamp that is the majority of commercial MilSFF, even his merely competent material stands out.

A lot of people — me, mostly — hold a grudge against Drake for his part in establishing the Heroic Mercenary trope in MilSFF, which is a bit unfair. Firstly, Jerry Pournelle and his literary spawn are far, far more responsible for the figure of the noble mercenary bravely gunning down dissidents in sports arenas [3]. Drake’s mercenaries are often not good people — some of them are very bad indeed — but they look good because the people around them are even worse.

Readers familiar with Drake’s work prior to 1984 probably expected this to be a Hammer’s Slammers book. Instead it’s a stand-alone novel [4] about Colonel Guido Fasolini’s mercenary company; it’s not even set in the same universe, which you can tell because the word ​“cyan” never appears in the text. It’s similar to the Hammerverse in that it is set in a future where humans have settled other planets before returning to our core competence, killing each other over political and religious differences. It’s the sort of setting where sell-swords might prosper.

The Slammers’ chief, Alois Hammer, has a solid track record of picking the winning side; poor Guido occasionally chooses poorly. By signing on to bolster the military forces of the Federal government of Cecach, he has chosen very badly indeed. The Federalists and the religious fanatics on the Republican side started off fairly evenly matched. But the Federals put their money in Fasolini’s mercenary company, while the Republic invested in modern tanks. The mercs are tied down to the Smiriky #4 Industrial Complex; the tanks are mobile. This has tilted the balance of power in the Republic’s favour.

The fact the civil war is going against the Federalist side is bad news for everyone on Cecach, but Fasolini and his forces should be able to walk away when their employers lose. Then Sergeant-Gunner Roland Jensen turns out to be just a bit too competent for his fellow mercenaries’ good. When the Republicans turn to bombing from orbit, Jensen makes an educated guess about the path the ship will take. His guess is accurate enough that he manages to place a round directly in the path of the ship. Exit one very expensive, irreplaceable starship. Enter a burning Republican grudge against Fasolini’s unit.

The officers of the Federalist 522nd Garrison Battalion are charged with keeping the prisoner-workers of Smiriky #4 at their posts. The officers can see that the war is going against their side; they know that their side will shoot them if they fail to hold the complex to the last soldier; the only option open to them that leaves any hope of survival is to cut a private deal with the Republicans. If the price has to be the heads of Fasolini and his men, that’s a price the officers of the 522nd Garrison Battalion are willing to pay.

Which leaves Fasolini and his soldiers trapped on a front where the enemy wants them dead, the supposedly friendly soldiers around them want to betray them, and the only path to safety goes through minefields and enemy emplacements. And then there are the approaching Republican tanks.…

Stylistic tics: while Drake doesn’t scatter the word ​“cyan” like poppy seeds through the text (as he does in the Hammerverse), he compensates for this lack with an overuse of a marker for dramatic moments: variations of ​“and then his/her world exploded.”

This is an (approximately) thirty-year-old novel and Drake does go out of his way to establish that Cecach is a comparatively poor and backward planet — which is why a starship and a handful of tanks can make such a difference to the war. I was somewhat surprised to see how important drones are to the plot, even if they aren’t equipped with weapons. There are modern MilSFF books that don’t make as much use of UAV’s as this rather venerable novel does.

Fasolini’s soldiers aren’t a heroic lot; they’re people who for reasons that no doubt seemed good at the time have decided shooting people for a living while other people try to shoot them was a sensible life decision. Some of the mercenaries are just ordinary people doing an unpleasant job; the worst of the mercenaries are bad indeed. They are rapists and pedophiles. The characters who come closest to being ​“good” in a conventional way are the deserters from the Federalist 522nd.. They elect not to betray their allies for their badly timed competence. Otherwise, Fasolini’s unit’s main virtues are competence, solidarity, bravery (albeit as a last resort in some cases), and creativity. Oh, and they are not borderline insane religious fanatics like the Republicans or back-stabbing cravens like the Federalists.

People who go into this expecting the protagonists to have what Travis McGee called a ​“John Wayne day,” when all the protagonists’ bullets hit and all the antagonists’ bullets miss, are going to be disappointed. Being a protagonist confers no plot immunity in this novel. Moreover, it’s not just the minor characters who provide a brief impediment to a bullet or find themselves participating far too intimately in a massive explosion; major characters die as well. There’s no supernatural force ensuring that the unjust are punished; the would-be rapist in Fasolini’s unit ends up doing fairly well for himself [5]. This really isn’t a book about good guys and bad guys; it’s about survivors and the other sort of people.

When The Forlorn Hope is in print, the publisher is Tor, but as far as I can tell the most recent printing was 2006. I am afraid this is another Abe Books, Bookfinder, or local library deal.

1: I don’t think his skills are particularly applicable to epic fantasy. And I can’t say I care much for his taste in collaborators — although Karl Edward Wagner will turn up in a review if I track down a particular Subterranean collection and I understand that Kuttner fellow had some success even before the book with Drake.

2: My favourite Drake is his horror collection From the Heart of Darkness. 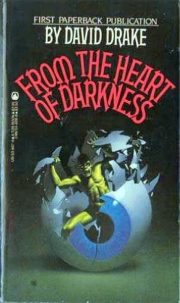 3: I am kind of obligated to review Mercenary at some point, aren’t I?

4: Although it was not intended to be stand-alone. Drake provides the interesting history of this book here.

5: The would-be rapist does get invited to a three-way at the end of the book. We are left to imagine how that goes down. I like to think that the two women who issued the invitation, one of whom he had earlier assaulted, only proposed the assignation so that they had an opportunity to parcel him into a number of garbage bags, which would then be dropped into dumpsters widely distributed across the city.