This is my third foray into what I have decided to call ​“the essential collections of Larry Niven, being an irregular review series I may not even get around to finishing or continuing” (or, as it turned out, tagging or giving its own formal series name in the sidebar).

The actual physical book I am reviewing is something of a mystery, because I have no idea how I ended up with a copy of the 1974 printing of A Hole in Space . I clearly remember that the first Niven book I bought was the 1975 edition of Neutron Star 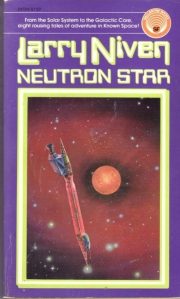 I liked it enough to snap up all the subsequent Niven collections. The book sitting on my desk is clearly the 1974 printing and was purchased new; both the price and the absence of the distinctive cover format Ballantine/Del Rey used for Niven in the latter half of the 1970 make that clear. Did I buy an old, but previously unsold copy that had lingered on bookstore shelves?

At first I thought that this book might be a relic of the failed commune that trashed my family’s farm. (Bad decision to rent to them, bad, bad.) They left behind a lot of junk. My copy of Beyond This Horizon is a hippy relic. But on second thought, I realized that we had cleared away the last remnants of the commune by 1971, or 1972 at the latest. Unless the hippies had developed a time machine just for buying books from the future, this book could not have been left by them. It’s a puzzle I will probably never solve.

(Trivial? Well, it matters to me, OK? Provenance is important to collectors.)

This was for many years my favourite Niven collection. Has time been kind to it?

As far as the State is concerned, Corbett is a corpsicle into whom the memories of a dead man have been decanted. As far as Corbett is concerned, he survived cold sleep to wake in a strange time and an unfamiliar body. As a natural-born tourist, he seems an ideal solution to the State’s need for a starship pilot.…

You can date this story by its assumption that a Bussard Ramjet is effective. This story was later folded into A World Out of Time , which I think was the last Niven novel I really enjoyed.…

On this re-read, I noticed a worldbuilding detail I previously missed: if freezing people kills them, thanks to cell damage, why were millions of corpsicles kept on ice for decades or centuries? Who was paying for that?

When I first read this, I wondered if Cabell had been revived into a contrived future world, a Potemkin village. If everything was a lie, then what he was told about corpsicles could have been a lie. But, no, the corpsicle story is supported as fact in the novel into which this story was later folded.

The next set of stories was inspired by Niven’s own Exercise in Speculation: The Theory and Practice of Teleportation. For some reason, one story in the sequence, 1973’s ​“Flash Crowd,” is missing from this collection 1. I assume that reason was to annoy the hell out of detail-obsessed fanatics like me.

JumpShift makes escaping from the scene of a crime trivially easy: shoot your victim, step into the booth, dial a destination, and vanish! Except as one murderer discovers, it’s not necessarily that simple.

The murderer is caught because he takes a much too narrow approach to his problems. That particular cognitive trap is all too familiar, as it has been the cause of many hilarious Nicoll events.

How to react to the end of the Golden Age of teleportation-based crime? With one last big score, of course!

The crooks in this story use riots known as ​“flash crowds” as cover for their crimes. Why so many riots? In this future, it seems as if people spontaneously combust into riots when conditions are just right. It’s less social unrest and more a kind of weather.

As many people have pointed out, there are parallels between Niven’s imagined social effects of teleportation and the actual effects of ubiquitous cell phone communication. See, for example, real-life flashmobs.

Teleportation means you can never, ever be sure of escaping your stalker. Well, almost never: a heavy, hard object applied firmly to the temple is still an effective deterrent.

The net lets your enemies cyberstalk you; teleportation makes it easy for them to physically stalk you. It may seen odd that the poor stalkee has no legal recourse, but this story was written sixteen years before California introduced its first anti-stalking law.

Teleportation means that as soon as the probe with the teleport receiver reaches Alpha Centauri, that system is only one step away. For the traveler. Teleportation is still limited to the speed of light so that’s four and a half years away for their stay-at-home friends. The first successful crewed mission to the (entirely useless) Alpha Centauri system returns nine years after they left, to an Earth deplorably disinterested in space save for profitable applications. How to inspire taxpayers to cough billions for crewed exploration of no clear commercial utility?

This inspired my Rusting Bridges Rule of Space Exploration: no matter how effective your space program, the starfarers of the future can always imagine how the program could have been much, much better. In this story, humans have launched their first interstellar mission in 2004, and have sent a successful follow-up within a generation. But the protagonist is disappointed that the space program didn’t go farther and faster, all thanks to those penny-pinching taxpayers!

The travails of Louis Wu in this story explain why Niven’s other ongoing character, Beowulf Shaffer, was so distrustful of Terrans. Beings raised on the worlds on which their species evolved make unwarranted assumptions about the way things work; they are insufficiently cautious in wildly different settings.

Much to my regret, Wu survives. Wu is basically Niven’s Lazarus Long figure: rich, spoiled, tedious. It’s not a harbinger of a ripping tale when he shows up.

Niven toys with artificial worlds, working his way from conventional generation ships to structures larger than the Milky Way.

There is a gap in this essay into which Banks fit his Orbitals. I don’t think Banks ever thought to put engines on an Orbital, so there’s a challenge for someone.

I have a feeling that this essay was one of the inspirations for Barton and Capobianco’s for 1998 White Light . Niven, of course, had already used the concept of a ringworld in his 1970 Ringworld.

Niven is makes it clear that he knows that Dyson (inventor of the Dyson shell) was not assuming a solid shell. My suspicion is that unlike a lot of SF authors using Dyson’s idea, Niven actually read the original paper, not second-hand accounts of it. Niven does not appear to understand the implications of geometry for gravity of any source in a shell. I can explain at tedious length if you like, but the short form is ​“everyone on the inner surface falls into the sun, all die, O the embarrassment”.).

Pohl and Williamson solved this problem by putting the biosphere of their Dyson sphere on the outside, which I think still stands as a unique but legitimate solution to the gravity issue. And then they made the Dyson Sphere into a rocket, because Jack Williamson.

A criminal uses blackmail to force a skilled practitioner to use his odd and off-putting talents to evil use. However, the blackmailer has not quite thought things through.…

Niven probably could have made an OK living as a mystery writer.

Two men who should never have been on the same team discover an alien base on Mars. Personality conflict + dire emergency set the stage for disaster.

Just as you can date some stories by how well Bussard Ramjets work, you can date others by their black holes. Do the little ones radiate prodigious amounts of energy, or not? If not, then pre-1974.

This story won Niven his third Hugo. He would win one more in 1976 for ​“The Borderland of Sol.” He was frequently shortlisted for the Hugo well into the 1980s.

A drunken revel leaves a bartender in possession of alien secrets that could determine the Fate! Of the World!

“Space travel isn’t important enough to blow up the world over” does not seem like a particularly controversial moral … and yet this is one of the few stories I can recall in which the group willing to murder a few billion people to facilitate space travel are presented as unambiguously wrong-headed fanatics.

This story has been stepped on rather heavily by the sexism fairy. A waitress is given an alien pill that makes her a better woman, that is to say, one who falls head over heels for the bartender and is willing to diet herself into a twig to look good for her man.

This collection is clearly dated in spots — Science Marched On for Bussard Ramjets and small black holes. Also, the idea that women are people has gained a wider acceptance than it had in the Disco Era. But taking into account how venerable the book is — ​“There is a Tide” was published closer to the end of WWI than it was to the modern day — I think this has aged reasonably well 2. Or at least it’s still a collection of stories most of which raise issues I like thinking about. My main gripe is that it should have included ​“Flash Crowd” and Exercise in Speculation: The Theory and Practice of Teleportation. And I would have left out the one non-genre story.

Although some of these stories have been collected in later works, this is the particular presentation I would recommend. This was a bestseller, so copies should be ubiquitous.There is also a Kindle edition.

2: It features a number of examples of a character type more common in early Niven than late: the fellow who had to work for a living.