For the life of me I cannot recall who recommended Moran to me but while my mass market paperback is a first printing (I think), I know I did not find it on my own. I remember a figure – tetrapod, bipedal, endothermic, homeothermic, and tachymetabolic — raving about The Long Run in my store decades ago convincingly enough that I made a point of buying it. Having bought it, I then tracked down every other Moran book that I could – Armageddon Blues , Emerald Eyes and later, The Last Dancer . Then silence fell. Publishing is a cruel and arbitrary world and it seemed that like so many other authors, Moran had been cast out into the shadows.

Happily, his books are once again available; the link is at the bottom of this review unless, ha ha, I forgot to include it. A sensible person would add it right now; I wonder what I actually did?

Onwards to The Long Run , and if I ever sound a bit negative, do remember this book was good enough to make me a Moran completist1. 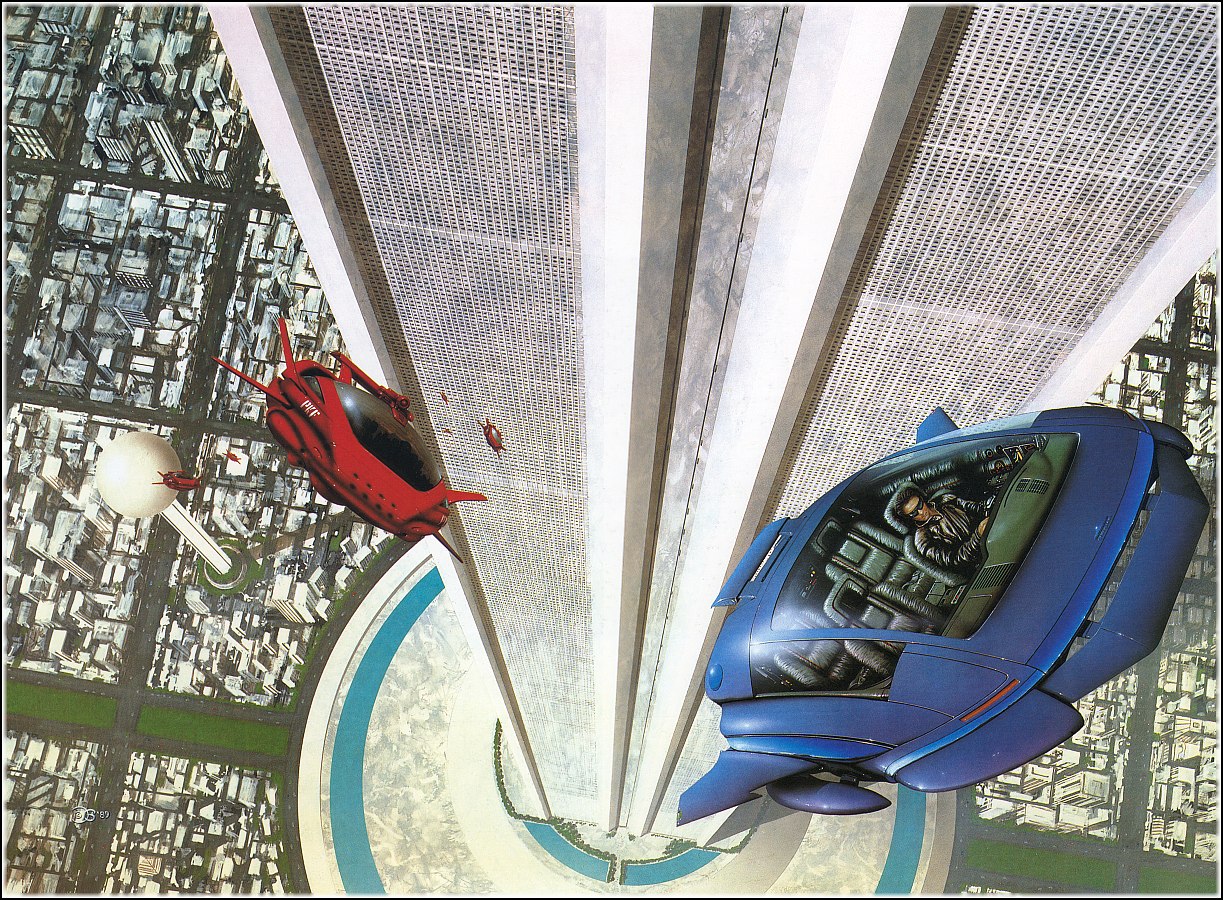 In the second decade of the 21st century, the world was unified under the United Nations. Some nations, like China and France, submitted peacefully and enjoy an elevated position within the new regime. Others, like the United States of America, had to be crushed militarily; efforts to bring the US fully within the community of civilized nations continues into the 2060s but the UN seems to determined to struggle on with the effort of pacifying the US even if it costs the life of every American.

The novel begins in 2068, six years after the United Nations Peace Keeping Force mildly rebuked a community of telepaths with a small but sufficient barrage of nuclear weapons; inconsiderately the telepaths were in New York at the time and what with the explosions, the fallout and the telepathic scream of the doomed, a lot of people died or went insane. As far as anyone knows, all of the Castanaveras telepaths died that day, although of course a few nut jobs claim a handful might have escaped.

In fact just three members of the family survived: twins David and Denice, whose fates are largely left to The Last Dancer , and the sole non-telepath in the family, Trent, who is the protagonist of this book. Trent hid in the Fringe, the extremely bad part of town SF of this era always seems to have, but through hard work he used his computer skills and cunning to claw his way out of the petty gangs into a life of semi-respectable criminality, one of the elite thieves and confidence men of the underworld.

Unfortunately for Trent, one of the dubiously sane people convinced that there are surviving Castanaveras is UN Peaceforcer Elite cyborg Sergeant Garon, someone who has just the right combination of obsession and power to be a serious problem for Trent. Much worse, Trent’s friends provide a melange of good intentions and remarkable talent that transforms an annoying complication into a full blown calamity. In a surprisingly short time, the Peacekeepers are convinced the late Sergeant Garon was correct and Trent is forced to go on the run from the focused might of a law enforcement organization whose answer to most set-backs is ​“get a bigger hammer”.

Trent can be a planner in the style of a Parker or a Dortmunder but his forte is audacious improvisation2. That particular style in these specific circumstances means that each short term solution Trent comes up with creates long term problems that are much worse than the short term problem he solved; his solutions to the new problems only lead to even greater crises, to the point where finally the only options open to Trent are to surrender to the Peace Keeping Force and the dreadful fate they have in store for him or to bring down the entire Unification. Guess which one he chooses?

This work was envisioned as part of a grand sequence of thirty-three novels called the Continuing Time but various issues have prevented the books from appearing according to the original schedule.

First the negative: Moran uses a unit of acceleration I have never heard of, the cepssa. I did Google it; I got a pointer back to Moran. THAT WAS NOT HELPFUL. IT WAS NOT HELPFUL AT ALL.

If I had to compare Trent to another character, it would be a Miles Vorkosigan if the Cetagandans had managed to hold onto Barrayar and Miles didn’t have the advantages of aristocracy; there’s a very similar manic undercurrent to both characters. Trent handicaps himself by refusing to kill (directly, anyway; it’s a bad idea to be anywhere near his path if his plan to avoid carnage requires the UN to exercise moderation), which means even when a laser beam in the face is called for, he searches for some other solution. This is a pleasant change from conventional SF and is rewarded with the opportunity for more wacky hijinks.

The world Trent lives in is a fairly standard one: the Earth is overpopulated to the point of desperation. From Emerald Eyes :

By the seventh decade of the twenty-first century following the death of Yeshua ha Notzri, the population of Earth alone totaled eleven billion human beings. That number was not as large as it had been earlier in that century; the efforts of the Ministry of Population Control had trimmed the Earth’s total population from a high of nearly thirteen billion.

Twenty-first-century Earth is notable, if for no other reason, in that more humans died of starvation in that one short century than in all the rest of Time put together. Of the twenty-three billion human beings born between the years 2000 and 2100 Anno Domini, some eight billion died due to a lack of food to eat.

And that overpopulation (and the consquences of a major nuclear war, if one happened) justify the Unification and heavy handed measures that include the Ministry of Population’s ​“babyburners”. You may ask ​“Good lord! But what of the sterling work of Warren Thompson, lo nearly a century ago? Surely he must be a household name!” and ​“Was there no inkling of the implications of the demographic transition in this time?” Sadly, population bomb alarmists had a complete lock on the memespace of SF writers in the 1980s, and in some cases to the modern day. If you ask an SF author who Warren Thompson was, they will probably say they don’t know and if you press them, you will get a thin layer between two heavy weights.

Even taking into account that this was written long ago, Moran’s 2068 seems to have an implausible amount of activity in space (and it’s not recent; the UN and SpaceFarer’s Collective were contending over the asteroid belt in the 2030s). This is hardly unique to Moran; see the late Charles Sheffield’s Cold as Ice series, which was written in the 1990s and has an almost identical pace of development.

Although he tried very hard to imagine what the networked world might look like in eight decades, Moran’s Crystal Wind seems to be very rooted in the BBSes of the 1980s. He does foresee an era when people might have access to terabytes but even so

Trent could not prevent himself from making a swift estimate; between six and seven hundred terabytes, nearly four and a half million CU worth of hot RAM alone. More than a man could carry.

Moore’s Law is hard to internalize even when you are aware of it and trying to take it into account.

(mind you, that RAM’s substrate is room temperature superconductors)

The hidden world of rogue AIs was interesting and at times I wondered if Ken MacLeod ever read Moran and thought ​“This is good but it would be even better if billions and billions of these entities died in screaming agony.” I have to say I prefer Moran’s approach to MacLeod’s obligate mass murder.

The following is not intended negatively: while Moran’s world has some unique elements, his main strength is not orginality as such. Look to his books for familiar tropes used with audacity, enthusiasm and energy, an utter disregard for mere plausibility, for grand spectacles where the struggle between a cop and a conman has consequences spanning thousands of years. Some authors have chase scenes; Moran has one that is essentially the entire book. Some authors have America crushed beneath the globalist boot: Moran has America subjugated by the French3. Some authors have grand conspiracies locked in shadowy battle; Moran’s conspirators are gods.

The Long Run and other stories of the Continuing Time can be found here. I recommend them.