The Tanith Lee 1979 standalone Electric Forest is one of her straightforward SF stories.

Magdala was clearly an exceptional child, but, sadly enough, not in any good way:

On any planet of the Earth Conclave, fetal conception was the controlled result of selective, artificial impregnation. This ensured that all children born were healthy. Occasionally, however, mistakes occurred in the area of contraception, and a fetus was conceived biologically. Sometimes, such children were less than perfect. It had happened that Magdala Cled was one of these.

which is why her mother surrendered her to State Orphanage C; why her fellow orphans tormented her; why despite her natural intelligence she was consigned to a menial job; and why the name everyone called her was not her legal name but rather ​“Ugly.”

When Claudio Loro offers her beauty, how can Magdala resist?

If Magdala actually had any say in the matter, she might well refuse. Claudio is domineering, scornful and perhaps even … unhinged. It’s too bad for Magdala that Claudio isn’t the sort of mad scientist who will let a perfect experimental subject slip out of his hands merely because she is put off by his arrogant demeanour. Magdala is hauled off to Claudio’s remote facility and transformed into a beauty. Or it so it might seem.

In fact, Claudio cannot actually alter Magdala’s appearance. He stores her in a maintenance capsule which is wirelessly connected to a beautiful robot. Magdala’s brain sends impulses; the robot moves. The robot’s sensors pick up stimuli; Magdala feels them. It seems to her that her consciousness has been transferred to a beautiful new body … but she is still inextricably embedded in her old, ugly one.

For Claudio, mad scientist extraordinaire, Magdala is more than just a proof of concept. He has crafted her new body to resemble Christophine del Jan, a woman once Claudio’s lover and now his rival. Claudio is obsessed with Christophine and with the work that they once shared. Poor Magdala is merely a pawn in Claudio’s twisted game.

Rather, that’s what he intends. What he gets is something else.

I went with the original hardcover illustration but I did like the cover art on the DAW mass-market paperback. 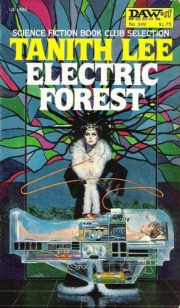 It may seem as if Lee is exploring the implications of near-universal perfect health when she imagines a world where people are so unaccustomed to seeing people with disabilities that they lack all considerate coping mechanisms. People either shun Magdala or lash out at her in rage and loathing. It seems to me that this is not actually imaginative world building, but a reflection of the time when the book was written. (Not to mention Lee’s abiding concern with beauty and appearances.) Sequestering the unsightly and unconventional used to be SOP; if it is not now SOP, that is thanks to decades of effort.

I was enjoying this tale of obsessed scientists, romance gone wrong, and the protagonist who finds a way out of her entrapment — right up to the Big Reveal at the end. Then we learn that everything we thought we knew was wrong, including stuff the omniscient narrator told us. Admittedly, it was pretty clear that (at the least) either Christophine or Claudio had to be lying; given the way Claudio treated Magdala, I confidently expected him to be the trickster. The Big Twist disappointed me because it moved the focus of the story from Magdala (whom I liked) to a cold war between the Earth Conclave and its rival Federations (about which I cared exactly nada1). The ending also undermined Magdala in a pretty insidious way.

But maybe that was the point? Maybe pulling the rug out from under the reader was supposed to underline the untrustworthiness of the Earth Conclave. Come to think of it, this could be read as Blake’s 7 fanfic, although I don’t know that anyone else would see that as reasonable.

I enjoyed the book I thought I was reading (up until the ending), but was disappointed by the one I actually read. I may have to reread this at some point to see how it reads when I know where it is going.

British readers can buy this from SF Gateway. North Americans will have to look for used copies.

1: The Big Fear, that the Other Side would use Christophine and Claudio’s technology to replace loyal citizens with lookalike moles, does not really make sense. The replicas are only advanced robots. Surely there must be a way to tell artificial beings from living ones — or to cut off the wi-fi signals that actuate the robots. But in many ways the book operates on rather operatic logic.