2004’s Fatal Women is one of three works Tanith Lee wrote under the pen name Esther Gerber. 2004 also saw the publication of the Gerber novel 34, while Disturbed by Her Song came out in 2010.

Phèdre, herself a lesbian, uses her charms to seduce and murder abusive men. Her victims are too blinded by lust to have any chance of survival. Their widows do not complain. However, her second victim, Armand Blos, leaves behind not just a battered wife but a loving mistress, Rherlotte. Rherlotte knows very well who murdered Blos, although she has no proof. She has something better: an infallible plan for revenge.

If I added short works to my running list of missing parents, this would add one dead mother and one dead or missing father to the total.

Laure is a youthful member of a Lady’s Club run by the elderly Sidonie Aubade-Valents. The club is actually a convenience for well-born lesbians seeking like-minded ladies, as distractions from marriage to undesirable but wealthy men. Laure becomes obsessed with Virgile, a beautiful courtesan whose favours are only available to patrons who are both wealthy and terminally ill — and who agree to rewrite their wills in Virgile’s favour. Laure will have wealth as soon as her aunt dies. To embrace Virgile, she would embrace death itself.

Laure is pretty much the only person in her circle who puts her desires above her long-term financial interests. Her friends are a calculating lot, the ancient Aubade-Valents most of all. It’s not that they don’t have passions, but they are aware of the constraints under which they operate. They tend to play long-term games, eschewing short-term rewards. Aubade-Valents, for example, married for money and used it to create a space for people like her. Laure’s cunning scheme will at most fill a grave.

Infatuated with ​“the Sugar Girl,” a stranger whom she sees every day, Sarah is quick to capitalize on a sudden opportunity. It is raining; Sarah has an umbrella while the Sugar Girl does not.

Sometimes the author is not on the protagonist’s side. BUT THIS PLOY WOULD HAVE WORKED IN A ROMANTIC COMEDY!

Infatuated with Helen Driver, Sabia inveigles her way into the Driver household as Edmund Driver’s temporary secretary. Both Drivers are canny enough to see that Sabia has an ulterior motive, but both misunderstand its nature. The results are tragic.

Vacationing with her increasingly loathsome lover Munne, Esther is drawn into a local mystery. Why did a young woman vanish from her room, leaving behind all her worldly goods and a distraught girlfriend?

Like so many lesbian romances, this one reminds me Dashiell Hammett’s The Maltese Falcon , which features a missing man named Flitcraft. Both Flitcraft and Esther feel like

somebody had taken the lid off life and let him look at the works.

I expect Esther’s reaction will be just as effective as Flitcraft’s.

Rachel is approached by the repellent but exceedingly wealthy Julian Dryne. He is determined to purchase a drawing she owns. The drawing was given to Rachel by the talented and no longer obscure Avrilenne Kissei. Rachel could use the money, but the sale is completely impossible. Although not for the reason Rachel gives.

A detailed discussion of the works in this book by the author of The Hidden Library of Tanith Lee.

This book had two editions, one with the cover I used above (despite finding it repellent) and one with this cover: 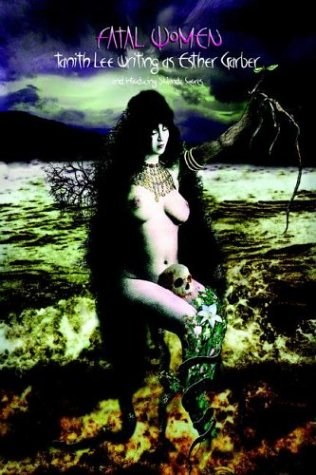 I am not inherently opposed to naked Goths but I am pretty sure linking to that pic on Facebook would get my post taken down immediately.

I wonder what Heather Rose Jones would make of this collection.

All of the stories feature obsessive lesbian relationships. Many do not end well. This is not homophobia, as, in the context of Lee’s work, lesbian romances are no more and no less doomed than the other varieties. The long-term relationships that work are the ones based in rational self-interest, not nerve candy. Yay for Adam Smith?