Tanith Lee’s 1984 Tamastara or The Indian Nights collects seven stories, five original to this volume. I was actually going to skip this one, in part because for some reason I had never catalogued it and thought I didn’t have a copy, and in part because ​“British author tackles Indian fantasy” filled me with foreboding, especially in the context of the more problematic aspects of The Storm Lord.

Having discovered that I do in fact have a copy, I feel that I am required to review it, trepidation or no.

Chaver, a self-styled lord of the Raj, graciously allows the beggar woman Agnini refuge in his household. Little does Chaver suspect that Agnini is a nagini, a snake person, or that Agnini will turn her serpentine gaze, not on the master of the house, but on his son, Davy.

Firstly, Lee’s view of the sort of Brits who flocked to India to lord it over the Indians is not, shall we say, in any way positive. Secondly, the story emphasizes Agnini’s beauty early in the story … which then veers in an entirely different direction than I expected. This looks like a boy drawn into marvellous adventures in a fantasy realm, but there’s more going on here.

If I had a column for Bad Parents in my missing or dead parents chart (and if I bothered to chart short works on it), this would definitely have an entry.

How could an experienced tiger hunter like Pettersun fall prey to a tiger?

I am rather irritated with myself because only the day before yesterday I came across a discussion of Blake, the Tiger Tiger chappie, and how it is people who draw inspiration from him invariably draw from the early part of his career and not the late. If I could just remember where I saw it, I would insert a link. In any case, this would be an example.

There seems little chance that the skinny, short-sighted groom and his bad-tempered, ugly wife, coupled in an arranged marriage, will fall in love. What possible difference could a simple walk in the forest make?

This too did not go quite in the direction I expected.

Under the Hand of Chance • novelette:

Ramahi considered himself blessed with beauty. His handsome face would surely lead to a luxurious life that required neither maturity nor moral character. Sunita, in contrast, felt that her beauty only added to her woes. Neither of them fully realized how fleeting beauty can be, how transformative its loss.

Sunita’s beauty is precious but not for her. It simply makes her a more valuable pawn, from whom only her kin will benefit.

All Raksha can destroy anyone. All he needs is a single tiny flaw in his victim … and what man is utterly without flaw?

Lee starts off by telling us how the story ends. She then tells us how Raksha reaches that ending. This sounds anti-climactic, but it is not.

To be a great star, to be worshipped by the desperate masses, to give them hope that perhaps their lives may also be wonderful and filled with riches! Fame sounds wonderful … but it can come at a dreadful cost.

At first it seems as if beauty and fame cost more than they give; the truth is even more terrible.

A brave woman; a terrorist hiding after an attack gone horribly wrong. There is a connection, but it is not the one you might expect.

Huh. I guess that if you accept the worldbuilding (and its underlying theology) , the story’s odd approach makes sense.

I find the ads in the backs of old books fascinating. DAW seems to have thought that there was a large untapped market for stories about heroic women. 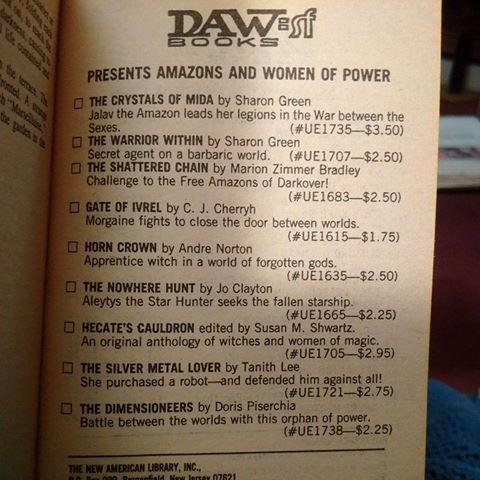 The company went after that market in a major way.

Lee was in love with India or at least with the idea of India. To my knowledge she never visited the subcontinent, and certainly had not when she wrote this book. However, if I am reading the acknowledgements correctly, she did seek advice from those who knew more about the subcontinent. Yay research.

In any discussion of Tanith Lee, it seems that someone will note how attractive she was. Sometimes this comes before any discussion of her fiction. In 1984, she won the SF Chronicle​’s award for ​“Most Attractive Female Writer1”.

Perhaps as a consequence of such experiences, much of her fiction (and this collection in particular) takes an ambivalent view of beauty. It can be a burden as well as an asset; it can be deceiving, if you think a beautiful body means a beautiful soul. In fact, in many ways this collection is as much about Lee’s thoughts on attractiveness as it is her vision of Indian fantasies.

After reading so much fantasy and science fiction, I am quite quite familiar with genre tropes and plots. All too often, I know how something will end before I am half-way through reading it. This collection managed to surprise me a number of times. I like such surprises.

Tamastara is available from Fantastic Books. 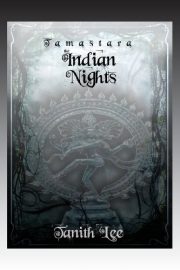