You might be expecting a review of the 1993 Tiptree winner but since I reviewed that book, Ammonite, last year, that’s not going to happen. Or alternatively, already happened last year. Instead, have one of the more notable books from the 2014 Tiptree Honor List.

2014’s Lagoon puts a familiar situation — first contact with aliens — in a setting that is likely unfamiliar to most readers of the book. Having (presumably) given the Earth a good lookover, the aliens in Nnedi Okorafor’s Lagoon pass over such standard venues for first contact as the UN building in New York City, the National Mall in Washington, or even a particularly large front yard in America’s Midwest.

Instead, their ship sets down off the African coast, near Nigeria’s sprawling metropolis, Lagos.

Humans are alerted to the alien arrival by a blast of sound, as the starship slams into the ocean. Thus is followed by a mini-tsunami, a wave that sweeps three people — Adaora, rapper Anthony, and soldier Agu — into the sea. Or perhaps ​“collects three samples of humanity” is more accurate. All three survive their inundation. Emerging from the ocean, they are accompanied by Ayodele, who may look human if you don’t look too closely … but who isn’t.

In a more regimented nation, Ayodele might have been recognized as alien and hidden away by the state’s security organs. In Nigeria, it takes a while for the authorities to notice the newcomers and longer to formulate a response. But it doesn’t take long for others to hear about the new arrivals, to identify Ayodele as their representative, and to approach her with hope, avarice, or fear. Or a mixture thereof.

All of these reactions are appropriate. It’s not as if Nigeria’s previous encounters with unexpected newcomers have been entirely unproblematic. The aliens are far more powerful than any previous visitors have been. And it eventually becomes apparent that the aliens are interested in all of Lagos’ inhabitants, not just the humans.…

Years ago, Norman Spinrad penned an article called ​“Third World Worlds,” which offered insights into world SF so striking, so remarkable, that the column has since been quietly removed from the Asimov’s site. The evidence that it existed at all can seen in the fossil record (the reactions the essay provoked) and of course, over on the Wayback Machine. Part of the essay read:

Now I must confess that I do not read Mandarin Chinese, any African language, Arabic — indeed any Asian language at all — and I must also confess for we Anglophones, that, with the exception of Japanese, hardly any, maybe no, science fiction written in these languages has been translated into English, or for that matter other European languages, and it would seem that such science fiction may hardly exist at all.

Among the many lacunae in Spinrad’s knowledge of world SF is that even if one sticks to non-translated works, English is a common language around the world. It’s not that hard, if one tries, to find Anglophone authors with personal connections to nations outside the First World (connections beyond having been a tourist there, I mean). Of course, to do so one has to imagine that those authors exist in the first place1. Of course, I don’t suggest people send Asimov’s cases of books by authors like Cho, Ghosh, Singh, Menon, and so on and so forth for Spinrad to review, but you could do worse than to send Spinrad a copy of this book.

This is an anarchic first contact; flawless efficiency does not seem to be a hallmark of Okorafor’s Nigeria, which means long before any sort of official negotiations occur, the people of Lagos have had a chance to react to the newcomers. The narrative switches viewpoints among several protagonists, even examining the situation from the perspective of the local indigenous non-humans. I am sad to say all the enlightenment in the world turns out to be of no use against jet windscreens or lorry tires. The novel also drifts from genre to genre. The ability of the aliens to move from shape to shape could be an application of technology … but various abilities manifested by the protagonists (not to mention the carnivorous road) suggest that’s not all that’s going on.

I am not entirely optimistic about the long-term benefits of first contact between Nigeria and the aliens, particularly since the aliens appear to be the sort of people who jump right into a new situation without carefully looking it over first. If you’re going to pal around with humans, you probably want to familiarize oneself with the concept of pain, something Ayodele did not do. Perhaps more ominously, it seems clear the nuclear powers of the world are contemplating sterilizing the entire region as a precautionary measure2.

I imagine some Nigerians will prosper, while others, especially the ones evaporated by irritated ambassadors or eaten by uplifted sharks, will find their quality of life declining measurably. Well, at least the situation is not totally hopeless. It’s not like Nigeria is making contact with Belgium.

It took me an unconscionable amount of time to track down this book. I had no luck with the Saga Press edition. 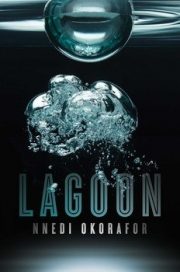 For some reason, Okorafor’s publisher Saga Press doesn’t seem to be that well distributed (at present) in Waterloo County (and the ebook isn’t available in Canada at all). Fortunately, I found a copy of the Hodder & Stoughton edition (for five bucks! Which I hope is a promotion to raise awareness of this novel and not something else, like being remaindered).

Having tracked it down, I am happy that I did.

1: Note: if you want to find this book, you have to check every part of the bookstore, because some stores (not naming names) shelve genre novels like this one in ethnicity-specific sections of the store. Literary apartheid. (I wonder where bookstores shelve Alexandre Dumas. Perhaps no one remembers that he was of Caribbean (and partially West African) descent.)

2: Even if nuking Nigeria (which, by the way, would constitute a war crime) were effective (which, given the advanced alien technology, is questionable), at best it would remove one single community of aliens. I am willing to bet that they are not the only community of those aliens, so presumably interstellar hilarity would ensue.