I admit I am cheating when I include Samuel R. Delany’s 1976 Triton1 in this series, because my Because My Tears are Delicious to You reviews are intended to cover books I read and reread as a teen. I didn’t so much read and reread Triton in the 1970s as much as I tried over and over to read it2. But now I have finished it. Finally.

The moon Triton3 is by some measures a utopia: certainly, what passes for government on Triton has done its best to provide a physical and social context in which people are free be happy. It stops well short of reshaping the people to suit the utopia, which for Bron Helstrom is just too bad.

Born Martian, Bron emigrated to easy-going Triton. Unfortunately, his youth — in particular his career as a prostitute — appear to have left legacies he cannot shed simply by relocating. He has elected to live in one of Triton’s all-male communes, but has found that his relationships with those around him, particularly the men who find him attractive, were by turns awkward and strained.

Then he meets the Spike! A talented woman for whom he could definitely fall. Fate seems to be on his side, as, against seemingly insurmountable odds, their paths cross on both Triton and on Earth. The Solar System may be staggering towards a Total War of horrifying proportions, but at least Bron’s personal life is going well.

Or it would be, if only Bron were not part of it.

I am not the best reader for Delany. I find his books pretty opaque. I am not surprised to see that the author Jean Mark Gawron shares the Triton dedication with Asimov and others, since Gawron’s Algorithm is for me the epitome of unreadable disco-era SF.

What I can see, from the level at which I can engage with this text, is that Bron is painfully oblivious to others’ feelings and his own quirks. He is doggedly self-sabotaging. Bron isn’t a particularly likable character and he is certainly an extremely unreliable narrator; the reader has to work out what is really going on by considering the shape of Bron’s blind spots. Bron does have some sympathetic aspects, though, so watching our protagonist flail blindly through life is painful.

Technologically, the world of Triton is on part with Varley’s Eight Worlds. One’s physical form and to some extent ones mind can be chosen; they are not imposed by chance and circumstance. In Bron’s case, I would argue this is not actually a good thing. In a milieu like ours, where it is very hard to change one’s physical form or mind, one can dream that if one were only someone else, one would be happy. Bron discovers that trying not to be Bron, even not being Bron, aren’t enough. The essential Bronness that is left even after what we would consider a pretty radical step, a sex change, sabotages the endeavour. True happiness eludes Bron.

(Of course, given that male Bron is just as clueless about men as he is about women, it would have been madly optimistic to think that a sex change would really change anything fundamental. And of course, in Bron’s world, a sex change isn’t really a radical step; it’s more like changing one’s hair color.)

Reading this was a bit like watching someone bash their thumb over and over, hoping that by the time the next hammer blow comes down, they will have worked out some cognitive trick to make it fun. I cannot fathom the mindset involved.

The novel invites comparison to Le Guin’s The Dispossessed; I should say that the author invites this comparison, because Delany has subtitled his book : ​“an ambiguous heterotopia” in a clear response to Le Guin’s ​“ambiguous utopia.” I refrain from the comparison; I have not reread The Dispossessed in ages. Also because every time I mention that I found Le Guin’s anarchists dreary and doctrinaire, my editor gets mad at me.

Now for the promised unexpected positive quality: Delany adopts the same basic solution to writing an interesting novel set in a utopia4 that Kim Stanley Robinson used in Pacific Coast, which is to make the protagonist’s personal problems orthogonal to utopia. You will always achieve drama, regardless of setting, if you can drive the protagonist’s love life into a concrete abutment at high speed. I might go even farther and say that both Pacific Coast and Triton have unlikable protagonists; the difference is that in Bron’s case, his abrasive qualities appear to be an intentional choice on the part of the author.

A note about the cover: I remember a reviewer in the 1970s being very irritated that cover artist Michael Hooks incorporated everyday items like mirrors and chess pieces into his art 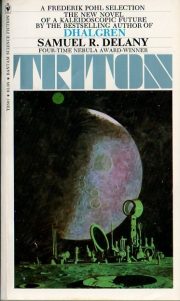 but I have to say I prefer Hooks’ piece to the rather bland cover Wesleyan chose. 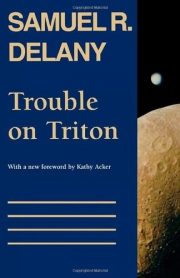 I suppose you can’t put lurid or even interesting covers on books aimed at an academic market.

This book being a Delany, of course it is in print.You may purchase it here.

2: And what of the great Delany work of my teen years, Dhalgren? That novel Disco-era readers were required to love or to hate? I, um, didn’t read it until the mid-1980s and am oddly neutral towards it. I feel as if I am betraying the genre by not taking a firm pro or con stand. Oh, well.

3: Triton, by the way, is tide-locked to Neptune, a fact that spoils a number of early scenes in the novel. At least for me.

4: Over the course of the novel 80% of humanity dies in what seems to be a pretty pointless war. This suggests that there are areas where even this otherwise laudable collection of cultures could use some improvement.