The America of Ing’s 1979 novel is filled with soft, juicy, unsuspecting Americans, who are pathetically vulnerable to bombs, bullets and the occasional bludgeoning. The whole country is a virtual smorgasbord for terrorists looking for quick, easy fame and funds from approving supporters.

For Hakim Arif, leader of the notorious Fat’ah terrorist group, Americans are not really his enemy, no matter what his press releases will say. Americans are the key element in his new entrepreneurial venture. Terrorism is a low-risk, high-profit scheme to which Hakim intends to add a bold new innovation: killing civilians within an unprepared United States.

But someone is about to throw a wooden shoe into the gears of Hakim’s business.

Ample news coverage is a vital part of Hakim’s revenue generation scheme. Kill a bunch of people, provoke horrified newspaper and TV articles, impress backers, money flows into Hakim’s bank accounts. The system works! Or it does as long as the journalists play their proper roles.

All it takes for the system to break down is for short-sighted terrorists to target the journalists themselves. Presumably some are intimidated. but more are angry. When comedian Charlie George comes up with a weapon journalists are uniquely well positioned to use, he finds a ready audience in America’s media world.

That weapon? Laughter. Nobody is going to hand bundles of cash to terrorist laughingstocks.

And that’s a threat to his business Hakim Arif cannot afford to ignore.

I don’t think Dean Ing is very well known these days. He was actively publishing for decades, from the 1950s to the 2000s, but as this handy chart shows…

his most productive years were more than a generation ago. It is all too easy for an author to fall into the collective memory hole.

This novel is based on the novella Very Proper Charlies. I don’t think the expansion really added much. Indeed, I think it shows that Ing was still learning how to write at novel length. If the book hadn’t seemed timely (for reasons I am sure I do not have to explain), I probably would have picked one of Ing’s other books for a Tears review. (Probably Systemic Shock , although I could be talked into doing the wacky WWIV trilogy of which it is a part.) This book is a less than fun read. It is burdened with technical minutiae that don’t add anything to the plot [1]; various plot twists don’t seem to make all that much sense; the author uses kinky sex to mark the bad people; the murder of one unfortunate gay journalist is grossly homophobic, even for 1979.

Ing liked action women enough to include two of them — one a white hat and one a black hat — but I don’t think he quite knew what to do with one, let alone two. If only he had had them meet and chat about something other than one of the men (and surely in a novel like this they had all kinds of subjects they could discuss) this book could have passed the Bechdel test. Sadly, this never happens.

And yet … while I wouldn’t call this a good book, it certainly has some interesting features.

For example, I was astounded that the thinly veiled Walter Cronkite character actually comes off as fairly heroic. He is attacked by terrorists, keeps a stiff upper lip, and when the opportunity presents itself, he does his best to escape. This is not what I expected in a book written by a guy I always assumed leaned more right wing than left.

Also, while it is true that the Big Bad is an Arab, the book by no means conflates terrorist with Arab or even with Muslim. Instead we are offered a rich assortment of terrorists: men and women, Irish and Iraqis and Americans, Christians, Jews and Muslims, commies and capitalists. The bomb-tossing extremists come from all walks of life, ethnicities, genders, and belief systems. And if you give them a target that is clearly a threat to terrorism as a way of life, they can even cooperate with each other. Kinda sweet really, in that it underlines the essential unity of mankind.

The moral about rejecting pants-filling terror in fact of openly mocking the bomb tossers and spree killers isn’t a bad one. Too bad that that mockery would probably sell fewer rolls of toilet paper for network advertisers than would fostering a perpetual state of terror. It would definitely undermine the steady march towards a panopticon state. And it likely would sell fewer copies than books that buy into a state of around the clock fear and terror.

It’s interesting to review the evolution of Soft Target ​‘s covers over the years: 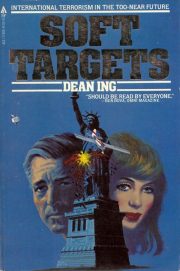 The first cover depicts an event that never happens in the book. 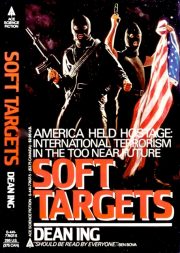 The second cover, the one from 1986, has a bold banner reading AMERICA HELD HOSTAGE: TERRORISM IN THE ALL TOO NEAR FUTURE. The author of that blurb seems to have been unaware that the novel is set in 1981. Which is not the future of 1986. The third cover is … 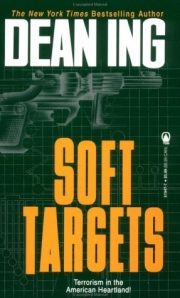 Ing is still with us and it would seem like a no-brainer for him to re-issue all his books as ebooks. A few of his books have come out in ebook format, but not this one. The most recent edition I can find for this is twenty years old: if there was a more recent edition, I have completely missed it.