I freely admit that I picked up Evelyn E. Smith’s 1975 Fortean satire Unpopular Planet for a fairly stupid reason: her initials amused me. If only she had had a doctorate!

A prolific author, Smith was best known for her crossword puzzles, Gothic romances, and the Miss Melville series (about a middle-aged socialite turned professional assassin). Although some of her work is still in print , this particular novel is not. Having reread it, I think I know why.

Nicholas Piggot is both a physical throwback — tall, blond, and sturdy, in a world of short, swarthy nebbishes —and a social maladept. He makes a sketchy living as a disreputable musician catering to the lowest sorts of people. It’s probably for the best that no one know he is haunted by Blue Dragons that only he can see. As it is, only the fact that the extremely well-born Bernardine has set her cap for him has saved him from being classified as unfit to reproduce.

Enraged that he has been replaced in Bernardine’s heart, Hubert Carmichael vows revenge. Bad news for poor Nicholas. Hubert is one of the bluest-blooded members of America’s officially classless society; he has the money and influence to make Nicholas’ life as unpleasant as it will be short.

Much to Nicholas’ surprise, there is an entire civilization under the pampered, regulated, overpopulated America he knows. There is an even grander one outside the pampered, regulated, overpopulated America he knows. The Blue Dragons, more properly the Mesiterit, the ones that he assumed were figments of a troubled mind, are as real as he is. The Mesiterit are also Earth’s true owners, having carefully guided our civilization for thousands of years.

Nicholas’ talent for stirring up trouble on and beneath the surface of Earth inspires his alien allies to dispatch him to the distant planet Paradise, long ago set aside for humans imported from Earth. There he fumbles his way into power almost despite himself, a career decision that will finally force the Mesiterit to turn on their amiable pawn.

The book purports to be a memoir written by Nicholas long afterwards. For some reason, the author adopted a twee archaic style. Which was, shall we say, an interesting choice, even though it did not make for a readable book.

Science fiction is not the go-to genre for plausible biology, but Smith goes the extra mile, capping the novel with an implausible explanation for the Mesiterit interest in a backwater world like Earth. I won’t reveal the reason, but I will assure you that if you hunt the book down and read it yourself, the explanation will disappoint you.

This is one of those stories about a charming cad who dumb-lucks his way to success after success (which he generally manages to parlay into failure after failure), the sort of fellow who ends up in a variety of beds with a wide variety of partners, some human, some.… not so much. The sex may be frequent but it’s also very obliquely discussed; people looking for spicy space adventures should look elsewhere.

As far as I can tell, this novel is beyond obscure now. I do not think this is due to the dodgy world building (because since when has that been an issue for science fiction?) or the occasionally tiresome satirical elements. It’s just that Nicholas (and his narrative voice) are off-putting. He is a jerk. He complain-boasts of being chased by too many women, none of whom meet his very exacting standards.

It may be Smith is a forgotten genius who deserves rediscovery, but this book does not make that case.

To end on a positive note: at least the cover blurb is accurate. 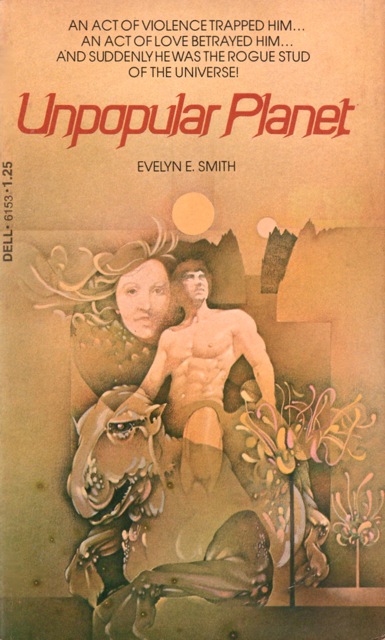 As far as I can tell, Unpopular Planet is deservedly out of print. Other Smith books are available here.