I hope to review all of the essential short story, novelette, and novella collections published by Joan D. Vinge. You may ask what subset of existing Vinge collections are on that list; the answer would be ​“all three of them.” It would be easier if such a book as The Complete Collected Short Works of Joan D. Vinge were to exist … but it does not. Alas.


I will begin with 1979’s Eyes of Amber and Other Stories, which contains, not only the novelette Eyes of Amber, but several other stories. As advertised.

This is the only piece in the collection not by Vinge herself. Bova didn’t discover Vinge; Damon Knight gets the credit for that. Knight was the editor who bought Vinge’s first two published stories for his Orbit series. Bova later printed a number of Vinge’s pieces. he even chose her Eyes of Amber as the cover story for this issue of Analog. 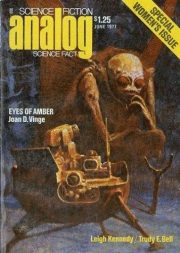 As his essay amply evinces, he certainly liked her work.

The fun part of this intro is playing a game of ​“how many paragraphs before Bova says something like ​‘every self-styled minority group in society is demanding more-than-equal rights for itself’.” Fewer than you might expect! And while he says glowing things about Vinge’s work, I must observe that Bova didn’t notice her until she co-wrote a story with her then-husband Vernor, who — no offense to Vernor — was at this time a not-particularly-talented writer.

Bova would later become something of a ​“too many wimmin in SF” curmudgeon, but I don’t think he ever lost his liking for Vinge’s work. And while I might poke fun at the fact that the Special Women’s Issue of Analog was more or less equally divided between works by women and works by men, I think it was a legitimately solid issue, one that will rate a review whenever I manage to find a copy.

How far will Lady T’uupieh go to pay back the upstart lord who murdered her family and stole her lands? Is the death of her surviving sister too high a price for revenge?

And on another world, how far will spacefaring enthusiasts go to win precious ratings for the ailing space program? Would they turn bloody murder on Titan into public entertainment?

It may seem weird that nobody but the US has followed up on the discovery of complex life on Titan — a civilization on Titan! But we must remember that, at the time this story was written, the US and the old USSR were sending out all the interplanetary space probes, the sole exception being, if I recall correctly, West Germany’s Helios probe. US probe pre-eminence in some fields is still plausible; NASA still enjoys a near-monopoly on outer system probes.

It would be a shame if all that expertise were to be lost. As the US fades into a drab post-probe existence, I trust that other nations will fund their own programs and aggressively headhunt American experts.

The Titan in this story is still very much a pre-Voyager moon (although the existence of Voyagers is acknowledged). Similarly, the aliens resemble 1940s Leigh Brackett aliens rather than anything scientifically plausible. Vinge does better in the very next story.

An amnesiac war criminal notes that some odd alien animals seem to be intelligent only when they are close to a natural reactor. This is puzzling. Other characters in this story, a collection of desperate castaways, struggle to understand the bizarre behaviour of an unfamiliar life form, one whose mobile form seems curiously intelligent.

There seems little point to punishing criminals when the punishment has removed all memory of crime. It is revenge, not reform. This particular war criminal is lucky to be owned by someone who isn’t trying to kill him, but other criminals are not so lucky. Pointless cruelty does seem to be the raison d’être of all too many criminal justice systems.

One generation and one thousand astronomical units into a one-way trip, the lone crewperson of an infra-stellar probe learns that the medical condition that drove her to accept the job is now curable. All that stands between her and a normal life is a medical procedure — and one thousand AU of space.

Also, there is a parrot. As a teen, I worried what would happen to it if the main character died before the bird did. That was before I learned about the evil of archosaurs.

Vinge does actually explain why this probe isn’t a simple robot probe. This was plausible in the 1970s, before recent technological advances. Reading this story now is even sadder than it would have been when the story was new. A one-way mission into eternal darkness [1], Though not as depressing as it sounds when you consider that she is doing something worthwhile.

A spoiled heir commits a murder; there are witnesses. One witness is a corrupt reporter, who is easy to buy off. The second witness isn’t as cooperative. It seems that a second murder may be necessary.

I previously reviewed this story here.

Each of these stories is supplemented with authorial comment. Here, Vinge notes the reader’s take on the story (is it plausible that one could love someone who left them to die?) will depend on the reader’s gender. Men and women will read this story differently, she thinks.

That may be so. I know that I would find ​“once came close to being an accessory in my murder” an insurmountable barrier to romance. Apparently a lot of women see no hindrance. If there’s a romantic gender divide in reactions to sexy Bad Boys, that may explain why I found the Moon-Sparks romance in The Snow Queen unconvincing.…

Recovering the lost history of one’s people may not be much comfort if there was a good reason for them to have forgotten that history in the first place.

This is an unusually depressing Vinge. What if instead of tobacco, the New World gave Europe access to an addictive drug that was even more seductive and addictive than opium? The outcome for the natives is still dismal. But not as dismal. Woo?

In a world where starflight is the domain of women alone, what hope for love between a handsome barman and a star-sailor whose life is relativistically extended? Well, if the barman is an immortal cyborg.…

As I said the last time I read this, men barred from starflight would not get all huffy that this super awesome activity was off limits. They’d convince themselves that it wasn’t worth doing in the first place. So hopelessly feminine!

One or two of these stories have a patina of zeerust, but when you take into account the fact that they are two generations old, they are less zeerusty than one might expect. The prose itself has stood up well; I think if Vinge were writing books in her own worlds and not doing media tie-ins, I would be just as interested in her new books as I was in The Snow Queen.

As far as I know, Vinge has put out no collections since 1985. Your only hope is your nearest or best source of used books.

1: I have long since misplaced my copy of this book, so I cannot double check this, but … I seem to recall an unexpectedly moving passage in Robert Forward’s The Flight of the Dragonfly, a passage explainingwhy someone might accept a one-way research mission.