Leigh Brackett’s standalone space adventure The Starmen of Llyrdis was first published in 1952, under the title The Starmen.

Perpetually out of step with the world, Michael Trehearne has travelled to Brittany in search of his family roots. When he glimpses a face much like his own, he is convinced he has come to the right place. He is both right and wrong: some of his kin are at hand but they are only visiting Brittany. Their true home is far from France.

Light years away, in fact.

Spoiler warnings, for this and for the unrelated The Long Tomorrow.

A thousand years ago, the great scientist Orthis created a breed able to survive the stress of superluminal travel. These Vardda are the only men and women of all the humanoid species who have this knack. For a thousand years, every interstellar ship has been crewed solely by Vardda. Backward, barbaric Earth is only one of the worlds with which they trade. It is by no means an important one.

Generations ago, an ancestor of Michael’s was driven from her village for the sin of loving one of the men of Llyrdis. Although a great source of wealth for the locals, the travellers were viewed with intense suspicion and falling for one was unforgivable. Despite the generations since this liaison, the Varddan blood runs true in Michael’s veins … or so it seems. The Vardda give Michael the chance to prove he is one of them by travelling with them into deepest space. If he is what he seems to be, he will live. If not, he will die and there will be an end to his longing and wandering.

The Vardda are tolerated because nobody has in a thousand years managed to duplicate Orthis’ trick of creating ultraspeed-immune people. Orthis tried to give the stars to everyone, but for various reasons (greed, fear of interstellar wars between competing races and planets) the Varddan Council tried to shut down Orthis’ research. Orthis fled into deep space, vowing to find a way to grant everyone ultraspeed immunity. Nobody knows if he succeeded or failed. But hope lives on among a cult of Orthists, who have spent a thousand years expecting that soon or later, Orthis’ dream will be brought to fruition. Perhaps if they can find his ship …

It could that Michael is exactly what he seems to be, a throwback. It could also be that the unique mutation is not unique at all. Simply by existing, Michael offers hope that the Starmen might be joined by peoples of other lineages. The sensible thing to do would be to exile Michael and everyone who knows about him to the prison world Thuvis.

The Council, refusing to break the Varddan laws, allows Michael his freedom. But not everyone connected with the Council feels bound by those laws. Kerrel sees Michael as a threat to his way of life and (icing on the cake) as a romantic rival for the heart of the tempestuous Shairn. Obviously it would better for everyone if Michael were to have an accident out in space; Kerrel has the ingenuity and will to arrange one.

I’ve used the Dean Ellis cover from the edition I own. I suppose I could have used either of these earlier covers 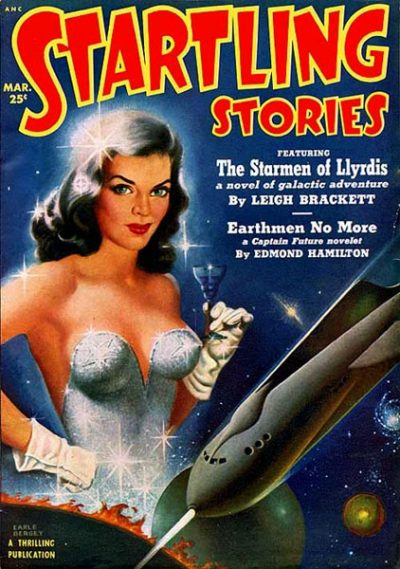 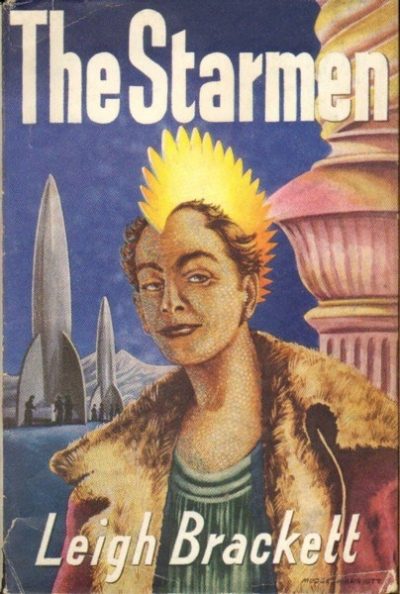 but I imprint on the first cover I happen to encounter.

It’s not clear when this is set. There are automobiles, so the 1950s seem as good a guess as any, although Brackett’s vision of small town Brittany could come straight out of the Dark Ages.

If there is any explanation as how human-like species appeared on other worlds before the development of starflight, I missed it. Everyone in the book seems to accept that any Earth-like world will have its own people, and these people will be similar enough to each other to interbreed.

Although this is a fairly stock adventure, The Starmen of Llyrdis does have some points of interest.

Michael is given a garbled explanation of how starships manage to exceed the speed of light. However, the crewman doing the explaining doesn’t actually understand the subject and is drunk half the time. Given the unreliable source, it’s hard to poke holes in Brackett’s handwaving at Einsteinian limits. Other authors might want to use the drunk, ignorant crewsplainer infodump technique.

Many authors would have explained the Vardda as motivated purely by self-interest, that is, the desire to maintain their monopoly on spaceflight. They might have taken this even further and imagined the Vardda setting themselves up as galactic overlords. Brackett didn’t wield the obvious tropes.

Her Vardda are very careful to limit their authority to matters of interstellar tradei. Worlds are free to govern themselves as they wish. If a planet makes bad choices, too bad for them. At least the problem is localized.

The Vardda are also shown to put the public good above self-interest, or species interest. Shairn, for example, opposes the Orthists because she is convinced that contact between radically different cultures leads to chaos and strife. She blames Earth’s diversity for its incessant wars. If every planet could field its own ships, interstellar war might follow. The current system works well enough at keeping the peace; why change it?

It’s also contra-trope that the grand quest that forms the second half of the book ends with a whimper, not a bang. Michael and his allies do find Orthis’ missing ship. They do not find the easy answer that they want, only a hint at a solution. The Vardda feared a radical and fast change in the status quo, but it becomes clear that this is not going to happen.

I was very surprised to discover that this book has been out of print since the early 1980s. Other, lesser, Brackett novels have had recent editions but not this one. I have no explanation.

Used copies of Starmen are available here (Amazon) and at your favourite used bookstores.

[Added later, because someone had to point this out to me]

There is a rather odd Kindle edition of this, which uses two of the earlier variant titles. Amazon thinks the author’s name is Leigh, which is why I missed it. Never heard of Old Landmark Books before.

iThe Council doesn’t seem have much trouble playing whack-a-mole with Orthists, batting them down wherever they pop up. It might be the Council has a bit more power than they admit. That said, I think the inability of other planets to duplicate Orthis’ trick isn’t so much that the research is being suppressed, or that a key insight has been lost, but that the galactics think of science as one bright coot working in isolation in a poorly lit room. They would have been boggled by 5000-author physics papers.