When I was a high school student (back in the 1970s) high schoolers were not known for keeping up on the latest Governor General’s Literary Award winners. There was one notable exception, a winner that got an enthusiastic reception from teens. I speak of Marian Engel’s CanLit classic Bear, or as it was better known to kids in the Disco Era, that one where the lady fucks a bear.

The lovely Lou is pried out of her safe refuge in the basement archives of the Historical Institute and sent into darkest Northern Ontario, there to assess a collection of documents recently bequeathed to the Institute . Out beyond Markham, where travel is by boat and communication is difficult even by the backward standards of the 1970s, where the air is 40% blackfly by weight, a potential historical treasure waits. It’s all up to Lou … because she is too low on the academic pecking order to resist exile.

The late Colonel Cary 1 left an isolated house, and all its contents, to history. The house is better appointed than Lou had expected. The building boasts no less than six rooms and as many mod cons as one can expect in a building reachable only by boat. The home also contains the Cary family archives, which Lou hopes have not been … ah … shall we say … sanitized. Canadians like to see themselves as hard-working, clean-living people; their ancestors must have been even more so. Hence indecorous details are better purged.

Behind the house is a shed and in that shed is an old bear. Its keeper is gone for the summer; it falls to Lou to care for the ancient beast. She finds a pitiful, neglected animal. City-raised, Lou dismisses a neighbor’s warning about how dangerous even tame bears can be. As she grows more comfortable with her companion, and it with her, she pets it, combs it, even goes swimming with it. 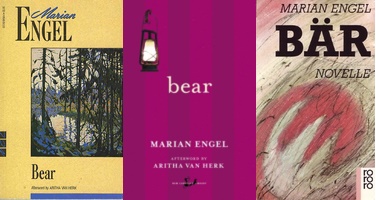 Out of respect for the material, I have opted to use the cover students were delighted to encounter back in the 1970s. Even if we ignore that gloriously accurate cover, I do have to wonder how the hell a book with vocabulary this frank and subject matter this exactly what’s promised on the tin managed to make it into school libraries without hordes of irate parents demanding its removal. It must have featured prominently in school board censorship debates.

A lot of you are probably wondering at this point ​“is Engel correct about the Canadian tendency to erase and sanitize their history?” Having just read a history of the Family Compact that managed to avoid using the term ​“colossal assholes,” I would have to say her assertion is completely plausible. Here in Kitchener and the lesser communities, we are so dedicated to erasing history that we tear down historic buildings whenever the opportunity presents itself. Remembering the past would involve accepting some unsavoury truths. Better then to embrace deliberate amnesia.

Of course, other nations do something similar, but they are not Canada and should not be held up to the same standards.

Engel has thought through her scenario a bit farther than other authors might have in her place. Her bear is a bear, not some idealized fantasy of someone who has never stood downwind of an ursine. One gets the sense Engel spent time studying at least one bear … that Lou’s bear had one or more real world inspirations.

While Lou’s actions make sense to her in her context — various asides suggest this is the first time Lou has ever been in a relationship where she was the one in control rather than being shackled by Disco-era sexism and academic exploitation — the author understands that screwing a bear is a pretty bad idea. That is why Lou comes surprisingly close to being casually blood-eagled by her ursine pal. Because in the end, a bear is a three hundred kilogram omnivore whose great claws can peel you like an orange if the whim takes it.

Not having read this in forty years, I was surprised to discover how many details from the book I had absorbed, without having any remembrance of their origin. There were the grumbles about historical amnesia; there was an anecdote about a family member who simply vanished during what was supposed to be a brief stay in 19 th century New York. This is somewhat surprising, giving the shortness of the book (only a little over 100 pages). A plethora of historical detail, PLUS ursine bestiality. What more could a kid want?

Engel’s promising career was cut short by cancer in 1985 . Her work lives on. Bear is available here .

1: Who was a woman. Her curious given name was inspired by a provision in a long-ago will, which assigned the family land to the person in each generation who became a colonel.

I felt so ingenious when I used that detail in an RPG campaign some twenty years ago. I had no memory of having first read it in Bear.…