Daniel Keyes (1927 – 2014) had a long career as a writer … but he is best remembered for one piece, his story ​“Flowers For Algernon.” First published in short story form in the April 1959 issue of The Magazine of Fantasy & Science Fiction, it won a Hugo in 1960. Following a television adaptation, the original story was expanded into a Nebula-winning novel, then turned into a film. A partial list of the other adaptations may be found at the bottom of this review.

Charlie Gordon, IQ 68, strove his whole life to be a productive member of society. Frustrated with his illiteracy, he signed up for an adult education class, where he struggled to master (in his thirties) skills others had mastered as children. Impressed by Gordon’s determination, his teacher Alice Kinnion recommended Gordon as an experimental subject to Drs. Strauss and Professor Nemur.

It was a fateful decision.

At first, the surgical procedure seems to have failed. Then, as documented by Gordon’s own journal entries, Gordon begins to gain powers of comprehension and analysis he not only previously lacked, but could not have even envisioned. In a surprisingly short time he passes from moron to normal to genius.

Cognitive increase brings Gordon many benefits, but they come with a cost. As his mind expands, he begins to see that people he thought were friends merely saw him as a comic figure. He also finds that his emotional skills lag far behind his intellectual powers; raw intelligence is not necessarily the most effective tool for managing infatuations.

Genius brings a new kind of isolation: when he was developmentally challenged, Gordon at least did not fully understand his plight. Now, he understands how apart he is. Understands all too well.

And there is worse to come.

I think it is best to treat this as the period piece that it has become. Keyes’ treatment of certain issues appears dated because it is dated: the original story is nearly sixty years old, while the novel is fifty. The author is at least sympathetic towards his subject; none of the usual SFnal spitefulness here.

Keyes’ treatment of women is not as bad as I would expect from SF of this vintage. Gordon’s neighbour Fay is something of a Manic Pixie Dream Girl (specifically the Bohemian Village Artist variety). It is interesting to see how far back that character type goes.…

What makes the short story (and the novel) so effective is Keyes’ choice of perspective. Gordon’s rise and fall are documented in a series of journal entries, allowing the reader to watch Gordon’s abilities improve and then horribly decay as he encounters the fatal flaw in Strauss and Nemur’s process. It’s very effective.

I prefer the short version to the novel; it delivers the same punch, but much more quickly. The longer length means that Keyes can deal with certain issues that brevity prevented him from acknowledging in the original story. In particular, I expected that the issue of consent would have been ignored, as the standards for medical ethics a half century ago were very different than they are now. I was pleasantly surprised to discover that the novel makes it clear that I was being unfair to Dr. Strauss and Professor Nemur: having determined that Gordon could not give informed consent, they tracked down a relative who could.

That said, there’s a line in both prose versions of Flowers I managed to miss every previous time I read this1:

he’s a speshul mouse the 1st animil to stay so smart so long after the operation.

Which is to say, there was probably good reason to think the current treatment was at best temporary. The scientists allowed their enthusiasm to overcome their prudence.

Best-known adaptations include (borrowed from Wikipedia and edited slightly) :

I have a feeling that this much-adaptedness is something that I periodically rediscover, then forget again.

I found myself wondering about the stage plays. How could playwrights turn a series of journal entries into a play? I was curious enough to order two versions of the David Rogers play, the full version and a heavily edited one act. 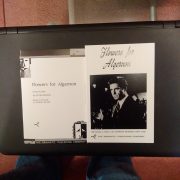 I expected that as with the story itself, the shorter version would be stronger. I was wrong.

Rogers deals with the issue of how to transform a text composed of journal entries by handing most of the business to the supporting characters. There is a lot of talking about Gordon, not so much of Gordon revealing himself.

Rogers is significantly less subtle than Keyes in making Gordon’s trajectory clear; he also makes what is to my eye a significant pacing change, greatly reducing the time spent on Gordon’s decline. In the story2 and novel, we are allowed to form our own conclusions about Gordon. In the play, the other characters tell us about Gordon. The playwright either did not know how to show us Gordon, or did not trust us to pick up the clues. A lack of faith in the audience that was repeated when the first film was made.

(I should perhaps also note that of the two versions of the play, short and long, the problematic elements are much more pronounced in the short version.)

Still, in the right hands and with the right cast.…

The short story may be found in The Very Best of Fantasy & Science Fiction: 60th Anniversary Anthology. Escape Pod​’s audio adaptation may be found here.

Print editions may be found here or here.

1: Speaking of details I missed on previous readings. The edition I have acknowledges the 1968 movie, which dropped the original title and used ​“Charly.” 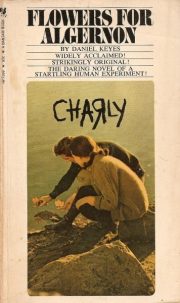 Note the spelling. And the backwards ​“r” above. Charlie Gordon knew how to spell his own name. He probably put a lot of effort into making sure he did. But whoever had final say on the movie title didn’t trust the audience, so they switched ​“ie” to ​“y” to underline Gordon’s developmental issues. You were great big jerk, whoever you were.

2: And he drops the final line of the story.