In a previous review I said

A bold assertion! And now that I have tracked down and read Jo Clayton’s 1977 debut novel, Diadem from the Stars , I can now assess how accurate that claim was.

Many and varied are the peoples of the galaxy; a surprisingly various assortment has ended up on the flypaper world of Jaydugar. Few have managed to hold onto the high technology that got them to Jaydugar. It is a world populated mainly by barbarians.

Aleytys’ mother Shareem was one such off-worlder, temporarily marooned on Jaydugar and sold to a barbarian chief. Shareem managed to escape the barbarians, but not before she gave birth to Aleytys, whom she abandoned to the care of her father’s clan. Aleytys has inherited the red hair and pale skin that mark her as other … and telepathic powers few on Jaydugar can match. Shareem is a Vrya, member of a secretive but powerful off-world race, and has passed her talents to her daughter.

During her brief, involuntary sojourn with the barbarian clan, Shareem made bitter enemies, and those jealous rivals are more than willing to punish Shareem through her daughter. And since they are barbarians, of course there is a way to orchestrate Aleytys’ judicial murder. Aleytys manages to escape, but fears that she will never be safe as long as she remains on Jaydugar.

She plans to make her way to a starship and flee the world of the two stars. Between her and salvation is a savage world filled with bandits, slavers, and predatory empaths. While on her journey, she comes into possession of the Diadem, an alien artifact that grants enormous power — but also enslaves its wearer.

An alien artifact whose insectile, alien owners are determined to recover it, no matter the cost to the foolish woman who put it on.…

Never put on a magic hat until you are sure you know how to take it off.

Doesn’t the cover to this just scream 1970s SF? 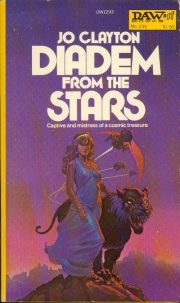 It’s a Michael Whelan. And while that’s not quite how I imagined the Diadem, Whelan does a pretty good job of including an assortment of significant details: Aleytys and her red hair, her giant cat, and some space ships (so you know this is SF and not fantasy). He clearly read the book before creating this cover.

Rather like the Tanith Lee books DAW was publishing when Diadem came out, Diadem has a fair amount of soft-focus sex1. Rather like the peoples of Tanith Lee books, the peoples of Jaydugar are pretty unclear on the whole idea of sexual consent. As is Aleytys. She doesn’t seem to take it personally when she is victimized; for her it seems to have the emotional significance of inconvenient rain on a day when she had planned a picnic. Indeed, she even feels a bit of pity for one of her tormentors when he comes to a bad end.

Now about that cultural osmosis quote … it seems that my belief that I knew a fair bit about this series was um … somewhat too optimistic. I knew that Aleytys would end up in possession of the Diadem and that she would be pursued by its original owners. I didn’t know that once she put it on, she could not take it off. Or that the Diadem has a mind of its own and the ability to commandeer Aleytys’ body. Or that it would take the whole of this first novel for her to get off her homeworld. If I had to guess I would speculate that at some point I confused this series with E. C. Tubb’s Dumarest series2.

The biggest surprise was Aleytys’ baby. Somehow my image of a galactic fugitive/adventurer didn’t include an infant on her hip. I am very curious as to how the author deals with that in future books. This feels like the sort of series where order matters, so my next Diadem review will have to wait until I can track down a copy of Lamarchos.

Which I believe I saw last week in one of the local used book stores.…

Speaking of used bookstores, as far as I know this is still very much out of print. Thankfully, print runs in the 1970s were huge so tracking down a copy shouldn’t be hard.

1: Are there enough SF books about pale-skinned ginger women with psionic powers and cats IN SPAAACE that I can claim that’s a subgenre of SF? A surprisingly large fraction of such a hypothetical genre was published by DAW.

2: Also published by DAW in the 1970s. There’s an ad for the Dumarest books in my copy of Diadem from the Stars .

Observation re the book ads: I am puzzled by the list of books DAW thought might appeal to Diadem-purchasers. I can see why Tubb is there (and Norton and Lee and Bradley) but why on earth did DAW think that Clayton readers would want to read the John Norman Gor books3? Clayton’s book may have a lot of slavery and non-consensual sex, but it is quite clear that the author disapproves.

3: Gor lends itself to parody, as does its author.