The author lurking behind the pen name T. Kingfisher is perhaps best known for routinely kicking me out of the #2 position on Livejournal. She is also a Hugo-winning author whose books are well worth sampling. Case in point: 2015's Bryony and Roses .

When we first meet Bryony, she's finally found something that distracts her from a recent avalanche of catastrophe:

Bryony’s current predicament is the ultimate distraction: she is freezing to death in an unexpected spring blizzard.

She is saved when she finds a manor house where no manor house was before or should be now. Inside, she finds no visible host or servants, but she does find food, warmth, and shelter from the storm.

But of course there's a catch.

Bryony (an avid gardener) admires the roses in the manor house garden, and makes the mistake of trying to take a cutting. Before she can leave the estate, she is confronted by an angry Beast, monstrous in form but as canny as a man. By trying to take a cutting from the rose bushes, Bryony has committed a great offense. And the Beast demands recompense.

There is a terrible price—though not the gruesome death she expects at the paws of the Beast. He demands that she stay as his gardener and tend his impressive gardens.

Although the Beast is a … beast, he is not a monster. Bryony cannot leave, but she does have her own room, with an inside lock. The manor has no servants but the House itself attends to Bryony's requests as best it can. On learning that Bryony's sisters are in dire financial straits, the Beast insists on sending them money. (At first he sends so much gold that they become a target for thieves and grifters; later he sends them silver and copper, enough to keep them alive and fed without drawing too much attention.)

Grudgingly resigned to her imprisonment, Bryony gardens dutifully. In her spare time, she attempts to solve the mysteries that stand between her and freedom: who is the Beast and what curse shaped his form? What animates House? And what role does the rose play in all of this?

I saved this book for the camping weekend from which I have just returned. A quiet farm deep in Mennonite country1 makes a very appropriate setting in which to enjoy this charming little novel. Alas, I neglected to take into account that my duties as host of the event would make it hard for me to find the time to read. Nevertheless, I did find the time, because I was enthralled by the book.

Writers have rung many changes on the Beauty and the Beast story since Marie Leprince de Beaumont penned her famous Beauty and the Beast and Other Classic French Fairy Tales in the 18th century2. It's obvious that Kingfisher is quite familiar with the original and most of its variations. There is a dark aside in which the novel acknowledges the other versions; we learn that Bryony is not the first … guest the Beast has had in his prison and that a happy ending is in no way guaranteed. The outcome of this story is potentially life and death. It would have been very easy to write a version of Beauty and the Beast that would be practically indistinguishable from the previous ones. Certainly other authors have fallen into that trap.

Kingfisher avoids this by giving the reader a protagonist who isn't just a generic Beauty. Bryony has her own history and character; she is more than pretty, she is intelligent and skilled. As is one of her sisters (The less capable sister remains off-stage). The novel plays out as it does not because the author is slavishy following an earlier iteration, but because who Bryony is shapes how she tackles her predicament.

Bryony and Roses is available from a variety of sources.

1: Some of us roughed it more than others. The other attendees slept in this forest of tents 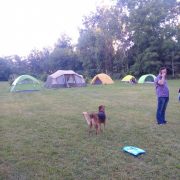 while I humbly settled for this little dacha. 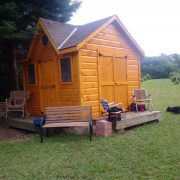 Also, there was a power source in the cabin, which meant that I could plug in my CPAP. This was only fair, as it reduced the odds that I would die in my sleep and thus fail to carry out my share of the duties. Although my remains could have contributed to the food supplies....

2: Including a Beauty variation by the author who routinely denies me my rightful #1 spot in the Livejournal rankings. Hrm. Is it a coincidence that both of my rivals have penned Beauty and the Beast stories ... or is this evidence of Marie Leprince de Beaumont's dark hand at work?