You’d think that being recognized as a member of the family that rules the world would be an occasion for celebration. Not for Yeine. She distrusts her grandfather, whom she believes to have sent the assassins who killed her mother (his own daughter!). Taking her place in the Arameri court in the great city of Sky means that she is effectively exiled from her beloved homeland of Darr, forced to live among cruel overlords whose ways are both alien and abhorrent. Poor Yeine will suffer for her unwanted elevation.

Her grandfather Dekarta already had two heirs: the cruel and malevolent Scimina and her drunken brother Relad. Having acknowledged Yeine as an Arameri, Dekarta takes the additional step of designating her as his third heir. This is in no way a favour to Yeine. Years ago there were four heirs but two have died; Arameri see politics as a full contact sport. As a rival heir to Scimina and Relad, Yeine is now a target for her more powerful and dangerous kin.

And then there’s the matter of the gods.

The Arameri owe their domination of the world to their close relationship to the supreme god, the Skylord Itempas. Ages ago, Itempas murdered the goddess of twilight and shadows, Enefa, in a fit of jealousy. Then he turned on Nahadoth the Nightlord. Three minor gods (Zhakkarn, Kurue, and Sieh) made the mistake of siding with Nahadoth against Itempas; the Skylord punished them by turning them into slaves, living weapons at the beck and call of the Arameri,

Yeine soon learns that few of the more powerful Arameri see any utility in siding with an outsider from a tiny, backward land. If she is to have any allies at all, it will have to be among the servants (themselves peripheral members of the extended family) or among the gods. The lesser members of the family lack overt power, while the bound gods have their own plans for Yeine, plans in which Yeine is but an expendable pawn.

Yeine doesn’t have much time to square this particular circle. Her true role isn’t as heir; she is to be the designated sacrifice in the upcoming coronation ceremony, when Dekarta retires and hands power to his successor. Yeine is to choose which of her two rivals will ascend the throne — at the cost of her own life. And the ceremony is only a week away.…

Back when I was an active first reader for the Science Fiction Book Club, chance would send me clusters of thematically related books. As I recall, The Hundred Thousand Kingdoms was just one of a number of books I classed as ​“fantasies whose plots would have been completely derailed if the gods had relationship counsellors.” Huffy, jealous Itempas does not deal well with the romantic triangle between Itempas, Nahadoth, and Enefa at all well. Ah, if only there had been a divine Dr. Hartley … so much unpleasantness could have been avoided.

The Arameri may practice hideously cruel rites; they may be careless with their weapons of mass destruction, but otherwise they are your usual bog standard imperialists, enriching themselves at the cost of the planet, providing unrequested regime change (and the occasional climate-altering calamity) as it suits them, all while assuring themselves they are utterly correct to act as they do.

I still have the original SFBC review I wrote for this book. One line in particular strikes me as amusing in retrospect:

It’s complete and a stand-alone (There isn’t much room for a direct sequel).

There were, of course, two sequels. Generally speaking, most trilogies have at least three books in them, if not more. But in this case, each of the three books does stand on its own.

Fortunately for Ms. Jemisin, I was not her only fan; the others did what I did not. The Hundred Thousand Kingdoms was nominated for the 2011 Best Novel Hugo, as well for the Nebula and the World Fantasy, not to mention placing first in the Locus Poll Award and earning a spot on the Tiptree Honor List1.

In the interval between writing my first and my final drafts of this review, Jemisin revealed that she is the new science fiction reviewer for the New York Times. Good for her.

I noted earlier in this review that you could read this book as a standalone. The Hundred Thousand Kingdoms is available here. I would strongly recommend simply buying the omnibus, since you will almost certainly end up purchasing all three novels anyway. The Inheritance Trilogy may be purchased here. 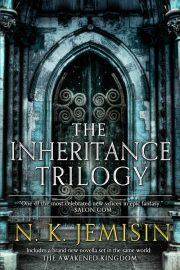 1: ISFDB confuses being on the Honor List with being nominated for the Tiptree.