1987’s Dawn is the first volume in Octavia E. Butler’s Xenogenesis trilogy. It was followed by 1988’s Adulthood Rites and 1989’s Imago.

Nuclear war has killed most of humanity. Few wanted the war … but to build so many nuclear weapons and then not use them would have been immorally profligate. Those not killed immediately faced lingering deaths due to fallout and nuclear winter. The total extinction of humans appeared to be imminent.

And then the aliens arrived in their vast, living starship.…

Lilith Ayapo wakes to find herself an involuntary guest of the extraterrestrial Oankali. She can sense that a long time has passed since the Oankali abducted her; in fact she has spent centuries in hibernation while the Oankali repaired the damage to the Earth. An unfamiliar scar on her body reveals that the aliens have treated her as their possession, much as they treated the Earth.

The Oankali saved the human race from extinction, at least for the moment, but there is a price tag attached to their generosity. The Oankali believe, with some reason, that the human combination of high intelligence and hierarchical social organization [1] has doomed humanity; humans (in their original form) will always seek out some form of self-immolation, if they possess the necessary technology.

One answer would be to suppress human technology; it’s not as if hunter-gathers can do much more than reshape entire continental ecologies. That solution doesn’t suit the Oankali; they didn’t save humans because Oankali are kind-hearted, they saved humans because they wanted something from them. That something is to create a hybrid race, with both Oankali and human traits.

And while the Oankali frame human-Oankali relationship as one of reciprocity, the Oankali ultimately make all the important decisions. Thanks to certain modifications made to the slumbering survivors, the choices available to the remaining humans are to parent Oankali/human hybrid children or have no children at all.

Appointed leader of the first party of humans to return to Earth after its restoration, Lilith is torn between her loyalty to the human species and her desire to survive. 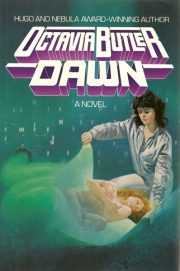 art that thoughtfully recasts dark-skinned Lilith as a Caucasian. In the artist’s defense, apparently a lot of white people find being reminded they are not the only sort of people in the world extremely alarming and publishers like Questar are happy to cater to xenophobic whites.

Butler generally dropped her protagonists into situations in which personal autonomy was extremely constrained. The specifics varied from series to series. In one series a powerful mutant is set on breeding tastier minds; in another, mundane human slavers oppress their victims; in this series, the oppressors are aliens. Again and gain, protagonists fall into the hands of some irresistible authority. The stories are rarely about how that authority is overthrown; they tell us how the protagonists deal with the lousy hand they have been dealt.

Dawn is no exception. The Oankali have almost total control of the humans and very little interest in accommodating human objections to their grand plan. There is not much humans can do to change the alien’s minds. Even lashing out at the aliens accomplishes little except to confirm the Oankali’s low opinion of humans. Not only that; killing an Oankali is not impossible, but it is difficult enough that none of the humans who try actually succeed.

While the Oankali claim to be benevolent, it doesn’t take the sting out their high-handed treatment of humans, or the danger out of Lilith’s position as the go-between for humans and Oankali. The aliens may be nearly invulnerable. She is very aware that she is not.

I wonder if any of the fans of this book have themselves committed acts of unrequested, intrusive charity aimed at reshaping other cultures into something comfortably familiar. Or if they see any parallels between their activities and those of the Oankali.

Almost all of Octavia E. Butler is in print. Dawn is available in ebook form either as a standalone or in an omnibus with the other two volumes in the series. I recommend the omnibus.

1: I find it kind of amusing that beings who treat humans as domestic animals moan about our love of hierarchies.