Onwards to volume two of Hitoshi Ashinano’s Kabu no Isaki , first published in 2009. The world is big, the planes are small, and Kajika may have lost her shot at Isaki.

School sports teams want Kajika, but she doesn’t want them. Flying is more appealing — even though she is considered too young to be a pilot.

Later, she and Isaki share a special moment as they watch a flotilla of planes pass overhead.

This is all very frustrating for Kajika, as she is not only extremely competitive, she is already a better pilot than Isaki. But that does not matter; he’s old enough to be a pilot and she isn’t.

Isaki is drafted into serving as Shiro’s pack mule. He continues to wonder how it is that Shiro can make a living running her small store. Shiro is anything but forthcoming.

Shiro sends Isaki and Kajika off on an assignment requiring superb piloting skills. Not to mention outlandish makeup.

Isaki is a lot more enthusiastic about getting assignments than he is about ensuring that he knows to successfully accomplish his tasks. Shades of Sheckley’s AAA-Ace.…

Mutual attraction transforms a brush with death into a meet-cute between Isaki and Sayori, a pilot from Kisarazu. A cute pilot. With an awesome plane.

And a million Isaki/Kajika shippers cry out in outrage and disappointment.

Caught out late at night, Shiro decides to spend the night in an isolated cafe.

Given the scale of this world, everything is isolated.

Another near miss. One unfortunate pilot thinks that getting ahead of Sayori in the landing queue will keep Sayori from cutting him off. This gives Sayori and Isaki a chance to develop their friendship.

I suspect that the Kajika-Isaki-Sayori triangle will eventually be resolved in a ball of flame, as Sayori cuts off some pilot whose slower reflexes cannot prevent a collision.

While Kajika fumes at home, Isaki heads off on an overnight stay with Sayori. Kajika’s slow burn is no way inhibited by Shori’s gleeful speculations about what’s happening,

What’s going on is less The Pillow Book and more epic-level awkward flailing. 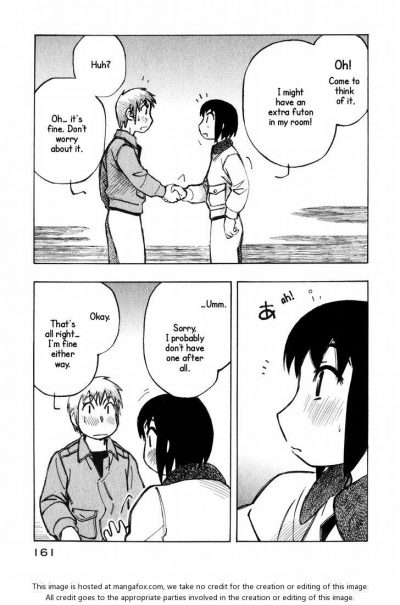 I see Sayori less as a carefree spirit than as someone whose bad habits are going to get people killed. This series isn’t as enchanting as YKK … but then, few things are.

So far as I know, there is still no North American edition of this series.