I decided to review Makoto Shinkai’s 2011 fantasy film The Children Who Chase Lost Voices for two reasons: the first was that I had just tried and failed to watch Age of Ultron. This DVD’s bright cover made me hope that Shinkai’s animated work was not filmed in what I have come to think of as Macular Degeneration-Vision (unlike Age of Ultron) . The second reason: the last few pieces I have reviewed have been pretty death-heavy (as has real life, for that matter). Since I had heard this was a particularly Studio Ghibli-esque work, I was hoping for something upbeat.

I was snookered. Sure the film was Studio Ghibli-esque, in the same way that Grave of the Fireflies is Ghibli-esque.

While still a girl, Asuna had to learn how to take care of herself. Her father is dead and her mother works long shifts to support the two of them. Asuna spends hours in the countryside by herself, listening to an archaic radio set, one of the few mementos left by her late father.

One day, she is attacked by a monster.

The enigmatic Shun saves Asuna. The two children enjoy a few hours of friendship before Asuna returns home. She will never see her friend again in this life; one of the secrets he kept from her was his impending death. Shun has been very, very naughty; he left something behind him that has no business being on Earth’s surface.

There may be hope for the dead (or so teacher Morisaki tells Asuna). Someone who is cunning and bold could travel deep into the Earth to lost Agartha, there to brave the Gate of Life and Death and perhaps win back a loved one from death. Gaining access to Agartha isn’t easy; only someone armed with a crystal clavis can pass the barriers between Earth and Agartha.

By the oddest of coincidences, Shun’s clavis looks remarkably like the peculiar crystal in Asuna’s father’s radio.

Shun’s brother Shin is determined to retrieve Shun’s clavis before surface dwellers use it to invade Agartha. Morisaki is just as determined to use that clavis (and any other tool that comes to hand) to reach the Gate of Life and Death and retrieve his beloved wife from the cold grave. Her encounter with Shun entangles Asuna with both men; her descent into Agartha is a question not of if but when.

This film is actually specifically Hayao Miyazaki-esque . It reminded me of an early Miyazaki film: Tenkū no Shiro Rapyuta . That also features a brave young girl with a relic that gives entry to an ancient, lost realm; that also chronicles a quest for forgotten knowledge that comes with a terrible cost.

Voices may be inspired by elements of Rapyuta, but it is not actually a remake. It’s not a straightforward adventure climaxing with cathartic explosions. It’s a long, hard journey across a desolate land. The moral is that that loss is inevitable and trying to avoid it only makes things worse.

Morisaki is very, very lucky to be a character in a movie that prefers melancholy homilies about the ephemeral nature of things to confrontations with terrifying monsters; if this had been a different kind of movie. his encounter with the shadow of his dead wife could have been much, much worse. Not that it goes all that well. Morisaki should have known. As Asuna points out, the very legends that inspired Morisaki’s quest make it clear that raising the dead is a bad idea. 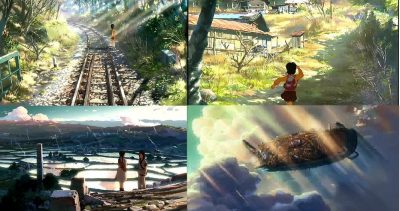 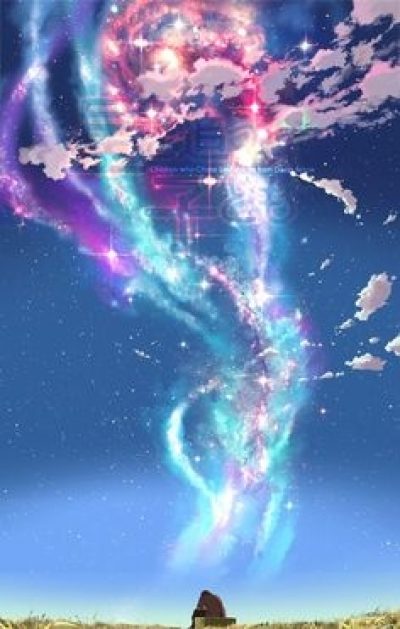 We are treated to vast enigmatic ruins 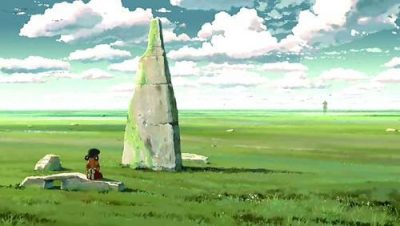 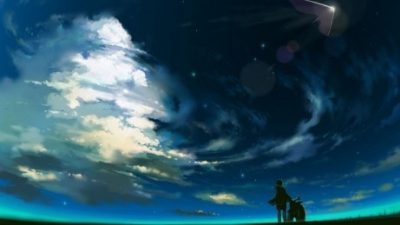 It’s so beautiful that the movie would be worth watching with the sound off.

Of course, there is also the occasional monster. 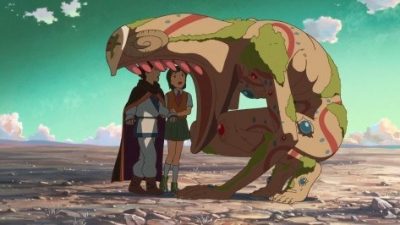 Asuna will be lucky to live long enough to learn that nobody lives long enough and even gods die too soon.

Not quite the upbeat adventure I wanted 1 but worth watching.

The Children Who Chase Lost Voices is available here.

1: Not to worry! I think I know where to find a copy of Now and Then, Here and There, which seems to be about the adventures of two kids transported to the far-out world of tomorrow. Same creator as Fruits Basket, so I am feeling optimistic!